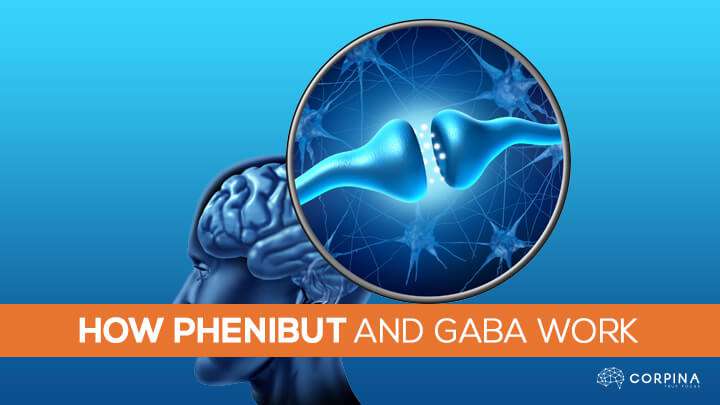 Phenibut is unique as a supplement in that it’s classification is multi-faceted: it’s used as a nootropic (smart drug), anxiolytic (anxiety reducer), and sleep aid.

There is no one standard phenibut dosage. Doses vary between individuals due to a number of different factors, and these are discussed below.

Phenibut is modeled after GABA

Many brands of phenibut are marketed as powder, which is the pure crystals ground down so they can quickly dissolve in liquid.

How GABA works at the molecular level

GABA molecules interact with the GABA receptor to open ion channels on the surface of neurons.

When the ion channels open, chloride ions aflow into the neuron cells, which reduces the neuron’s ability to readily form an action potential. This makes nerves less susceptible to reaction from environmental stimuli.

When neurons don’t fire, other areas of the brain also do not react. The result is an anxiolytic effect, or the perception and awareness that your mind is less reactive to stress and that that anxiety is lessening.

Various medications can trigger the release of GABA in the brain, including benzodiazepines, barbituates, and ethanol (alcohol). The GABA released from the consumption of these substances acts primarily on the GABA-A receptor.

Drugs that enhance GABA activity by interacting at post-synaptic GABA(A) receptors have long been used as hypnotics, sedatives, tranquillizers and anticonvulsants.

In this category, benzodiazepines rapidly become a favorite of doctors and patients alike, replacing barbiturates and becoming the most commonly prescribed of all drugs in the Western world in the 1970s.

However, problems such as dependence and withdrawal reactions became apparent in the 1980s, and it seemed that the usefulness of drugs with this mode of action was limited.

Recently, focus has shifted to a new group of drugs with GABA-ergic actions mediated through various mechanisms not directly involving the GABA(A) receptor.

These drugs include gabapentin, vigabatrin, tiagabine, lamotrigine, pregabalin and others.

Although originally developed as anticonvulsants for epilepsy, they appear to have wider applications for use in affective disorders, especially bipolar depression, anxiety disorders and pain conditions.

It remains to be seen whether long-term use of these leads to tolerance, dependence and withdrawal or discontinuation reactions.

Enter phenibut, an over-the-counter alternative to the heavier pharmaceuticals.

While equally as effective as the others, phenibut’s side effects are much less intense and the potential for dependance is relatively low in comparison.

Is phenibut more effective than GABA at reducing anxiety?

When taken orally, yes, it is. This might seem a bit counterintuitive – how is it that a GABA-derivative is more effective than GABA itself?

Phenibut has a higher capability of affecting brain chemistry compared to orally-ingested GABA because it can cross the blood-brain barrier, the brain’s biological shield against toxins and bacteria in the bloodstream.

Note: phenibut shares structural similarities to Baclofen and PEA (Phenylethylamine), both of which are derivatives of GABA. These are discussed here.

Secondary effects of Phenibut: sleep-aid and stress-reliever for PTSD

Because phenibut’s molecular structure is very similar to GABA, it triggers many of the same downstream physiological responses in the body.

Many users report that, in addition to its anxiolytic benefits, phenibut is tremendously helpful at inducing sleep, even in cases of extreme insomnia.

Using phenibut instills in the user feelings of well-being and happiness and it helps in fighting against insomnia, anxiety and post-traumatic stress disorder.

Phenibut is commonly used as a sleeping aid and many users report its potent effects. The following reactions are reflective of the larger trend:

“Firstly Phenibut is a potent sleep aid… I have used Phenibut for a whole host of things. It realy takes the edge off of comedowns after Cocaine and MDxx.”

“…I took two large doses of Pheni during the first 8 hours of withdrawal but all those nastly symptoms never appeared and i even got 9 hours sleep my first night off the G.”  – The Shaker, Bluelight.ru

“Every other nite I use phenibut and sleep well. I need something for the other nites, since you can’t take phenibut every day withou tolerance. So far, nothing comes close to making me sleep all night.” – LeanGuy, AnabolicMinds.com

The predominant paradigm is that phenibut improves the quality of sleep and leaves an amazing calming effect.

Similar to other popular cognitive enhancers like Piracetam, phenibut is beneficial for bodybuilders and strength trainers: during deep REM sleep, growth hormones are secreted which expedite muscle recovery after intense exercise.

Research studies using mice showed that mice given higher doses of Phenibut had significantly improved reaction time as the concentration of drug increased, especially in social environments with groups of mice.

Ongoing trials are promising, showing similar effects on primate brains. The Brain Hacking community subculture has mixed reviews of phenibut, though most reviews are generally positive.

3. Feelings of Well Being

Phenibut has the ability to stimulate dopamine at low levels, which is the neurotransmitter responsible for regulating motivation and pleasure-pain cycles.

This is why phenibut users often report noticeable increases in feelings of confidence, distinct from the reduction in anxiety.

How to dose Phenibut and time ingredients

The most appropriate starting dosage of Phenibut is 250mg. The ideal dose depends on a wide variety of factors specific to the individual:

Furthermore, the purity of Phenibut varies drastically between product, brand, and company. When calibrating phenibut dosage at home, it’s best to start very low and increase the dose very incrementally over time.

Users should think about Phenibut like this: “there is a perfect range for me, and the only way to find it is to test and analyze the effects.”

Testing should be done in good moods and bad moods, after a full nights sleep and when sleep-deprived, and on a full and empty stomach. When you approach Phenibut from this perspective, it frees you to try a number of scenarios and not be overly anxious about whether the drug is “good” or “bad”, or whether or not it works.

Drug Combinations can have additive effects

Phenibut can be supplemented with many other anxiolytics and sleep aids, including:

In combination, the anxiolytic effects are enhanced, but the side effects can be as well. Only attempt phenibut stacks if you have already established a phenibut dosage.

Take phenibut 2-3 hours prior to sleeping for the greatest sleep-inducing effect.

Most users report that, despite laying awake in bed for the effects to set in, they don’t feel overly sleepy or tired but still slip quickly into a deep sleep when the drug begins to take effect.

Not only is a gradual increase recommended for Phenibut when finding the proper personal dose range, but also when beginning a regimen.

Ramp up dosage slowly over the course of a week in a linear fashion to avoid the groggy hangover effect. Begin around 1/4 max dose and end at max dose a week later.

However, Phenibut is also often found as a typical ingredient in various growth hormone supplements. The mixture of amino acids and Phenibut is very beneficial for the growth of the body and muscle development.

Phenibut has relatively fast pharmacodynamic and pharmacokinetic profiles – a short half life in the bloodstream and quick interactions with the GABA-A receptor  – compared to other anxiolytics.

As such there are a number of cautions to be cognizant of when taking it.

First and formost: Phenibut can have severe withdrawal symptoms.

There is a strong tendency for new users to be stuck in a pain-averse mode, and thus overcompensate when using anxiety medications.

Do not fall into the trap of this mindset.

If you are suffering from insomnia, know that Phenibut won’t solve the problem in a night or even in a week, but it may provide some temporary relief that can help insomniacs improve their life situation.

If you stop taking Phenibut – cold turkey – after a long period of consistent dosing, then symptoms of insomnia will likely return.

Keep the dose of Phenibut to a minimum, and if you want to increase the dose then do it gradually and slowly over a period of weeks or months.

Is Phenibut Dosing different for weightlifters and bodybuilders?

Yes, for the most part. Serious lifters are capable of taking more phenibut than the average person, without building tolerance at the expected rate.

The body building community attributes this effect primarily to higher ratios of lean muscle mass, though a heightened mind-body awareness in lifters is speculated to contribute as well.

There are sporadic reports of users stopping panic attacks after drinking large amounts of phenibut in solution. Though we could not find any forum threads or medical resources to reach a definitive conclusion, there are a number panic attack-themed lists on Amazon.

The supplements on these lists are combinations of anxiolytics, so it’s unclear whether phenibut alone can prevent or halt panic attacks.