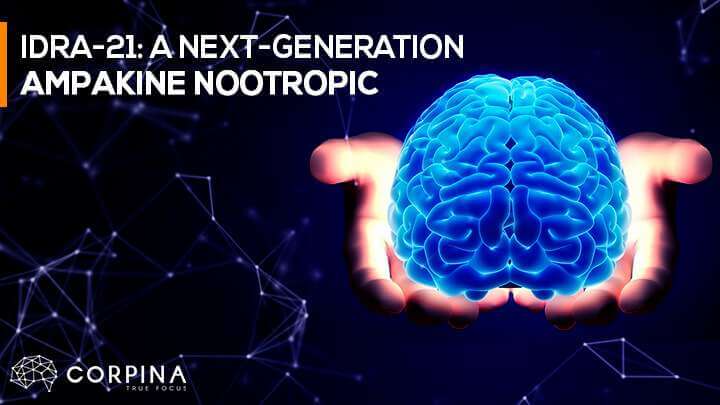 Ampakines are a relatively new addition to the family of nootropic compounds. They are compounds which act as modulators of attention span and increasers of learning ability through the activation of the AMPA glutamate receptor.

The nootropic potential of ampakines is currently being researched by scientists as a treatment for cognitive impairment, and by the United States’ DARPA agency to increase tactical effectiveness of sleep-deprived soldiers.

One of the newest ampakines that is available on the public market is IDRA-21, which features extremely long lasting effects coupled with experimentally proven benefits.

IDRA-21 is a drug derived from the benzothiadiazine (not to be confused with benzodiazepine) chemical structure. Other chemicals from that class include other pharmaceutical drugs, mostly diuretics to prevent organ failure. An article from Chemical Wizardry claims that IDRA-21 is related to aniracetam, another nootropic with similar (but far weaker) ampakine properties.

As it is a nootropic substance, IDRA-21 has been shown in a clinical setting to improve cognitive ability with little to no adverse effects. However, it is also important to point out that IDRA-21 is still a very new substance to the world, and still currently has more anecdotal evidence for efficacy compared to the amount of available lab research.

Much of the excitement surrounding IDRA-21 comes from recent animal studies bearing impressive results in the areas of nootropic activity, potency, and lasting of effects.

In a study done with patas monkeys, the experimenters measured the subjects’ cognitive performance in a complex behavioral task.  The monkeys were given the drug alprazolam before the task was given in order to induce a learning deficit (Thomas et al.)  The known nootropic drug aniracetam was pitted against IDRA-21 to test the latter’s efficacy in reversing impairment.

Results showed that the IDRA-21 was ten times as powerful as the aniracetam in terms of dosage, meaning that the effects were far more potent dose per dose.  The effects of IDRA-21 remained persistent for three days after a single dose, marking it as an extremely long-lasting nootropic especially when compared to the roughly 2 to 3 hour windows given by many other ampakines.

Similarly, research done with rats indicates that IDRA-21 is useful for reversing cognitive deficit – this time caused by the drug scopolamine.

In both cases, IDRA-21 proved effective for treating desensitization of AMPA receptors in the brain, which was simulated by the application of drugs at the beginning of testing.  This shows promise for treating people who may have AMPA-related learning disabilities, or enhancing intelligence in those with naturally desensitized AMPA receptors.

Use as a behavioral modifier

IDRA-21 has potential as a powerful promoter of wakefulness and awareness, thanks to its properties as an ampakine. Activation of the AMPA receptor results in the easing of learning ability by promoting the plasticity of nerve connections, as well as other glutamate-mediated effects such as improving situational alertness.

Unfortunately, while the general concept of ampakine effects is well-known, the relative effectiveness of IDRA-21 in human subjects is not well-known. The good news is, some people have tried the substance for themselves and have provided anecdotal observations.

The well-regarded online forum Longecity has a number of IDRA-21 related topics, including this one which contains a great deal of additional resources and personal experiences.

I had the opportunity myself to try IDRA-21 when it became available at a reasonable price. One day while I was at my university on-campus job, I decided to give it a go. Here is a brief summary of my experience:

I’ve been feeling tired all day, like I can’t really concentrate on anything. Hopefully I did alright on the quiz I took earlier, because I stayed up an extra couple hours studying for it, making me pretty sleep-deprived now.

I just received my package from new star nootropics in the mail, the IDRA-21 that just came out.  Going to take the suggested ~20mg dose of it and see if it helps me focus on my code.

It’s been an hour since I took the IDRA now, and I think I feel somewhat more alert. It’s definitely not a “pushy” kind of wakefulness like you feel with caffeine or adrenergics.  It’s more of a “oh, I’m not sleepy” kind of feeling – not nearly as strong nor long lasting as Modafinil but more effective and pleasant than aniracetam, which makes me feel spacey and weird. I also got a really good idea for my programming work, so maybe the learning ability increase is there.

IDRA-21 doesn’t have much “feeling” to it; it did make me more focused on the task at hand, rather than how I felt (how a true nootropic should work). And while on it, for the next 48 hours or so, I felt more aware of my surroundings – not overtly so, but there was a long-lasting “background” effect.

I could be crazy, but this stuff could actually be working!

Following the classic nootropic definition, IDRA-21 has little to no side effects. In fact, besides the intended benefits (wakefulness, increased learning ability, etc) it does not do much else.

Anecdotal reports have included slight anxiety and headaches, which could be related to increased glutamate neurotransmission in those who already have strong AMPA activity and don’t need IDRA-21.

However, it’s best for people who recently had a stroke to avoid this substance, as it could make damage worse according to this research.

Where to buy this ampakine

IDRA-21 is a chemical that is very difficult to find. Since it’s still early on in clinical studies, it may be some time for it to become FDA-approved or even readily available as a “supplement” of sorts.

Currently, the popular nootropic powder vendor New Star Nootropics sells small samples of IDRA-21, under the assumption that you know what you’re doing and you’re not claiming to use it as a bona fide, FDA-approved supplement.

While it is a new substance that is relatively mysterious to nootropics enthusiasts, IDRA-21 shows promise as a nootropic, especially in those with a sub-optimal AMPA system which the ampakine component treats.

We’ll be on the lookout for updates in regards to this drug, and we’re hoping it will continue to amaze us!

Just wanted to add that Limitless will begin carrying irda-21 in mid Febuary. Purity over 99%. Price will be 1.00 less per gram than the next lowest price vendor.

Ceretropic also carries it and in containers more easy to access than those supplied by limitless. I like limitless but don’t care for their tall skinny bottles, hard to measure out of.

This is fantastic stuff. I am a 60yo aspergers and adhd guy. Life’s a struggle mentally. My current stack is daily 120mg Phenylpiracetam Hydrazide.
I took 60mg of Idra21 18 hours ago and it has wiped much of my adhd symptoms away in hours.
My left/right hemispheres seemed aligned for the first in my life (think focus or confusion), and awareness, brightness & clarity of mind is like never in my life. It has not made me smarter or feel any different, but I am much more together, mind-wise.
It’s been less than a day, so if I am as blown away in a week or two, I’ll make an update here.