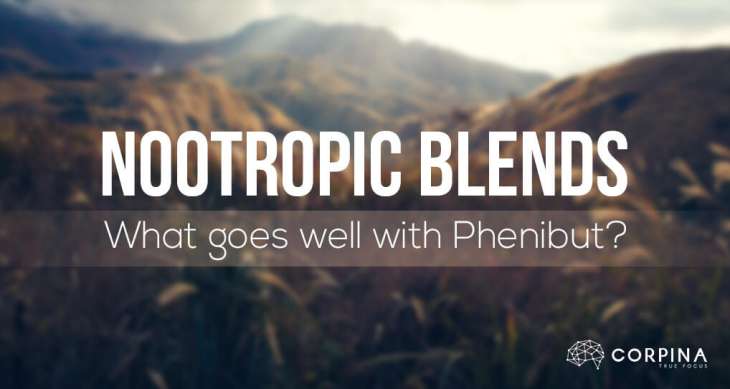 I’ve talked about nootropic synergy in multiple posts. It refers to the enhancement of benefits when two or more nootropics are taken together (ie, “1 + 1= 3”).

Although dangerous to mix with some drugs, Phenibut works safely and synergistically with other psychoactive compounds, and it be quite enjoyable to combine it with different herbs, nutrients, or pharmacological agents.

Many people enjoy mixing phenibut with other compounds that have relaxing effects, such as the herbs magnolia bark, Holy Basil, and kava kava, the amino acid found in green tea, L-theanine, or the essential amino acid L-tryptophan.

A number of manufacturers market formulas with phenibut in them, such as MRM’s Relax-All, which contains an unspecified amount of phenibut in each dose, along with several other ingredients which also have calming effects.

When I interviewed holistic physician Randy S. Baker, founder and director of the Pacific Center for Integral Health in Santa Cruz, California, about MRM’s Relax-All, he said:

My experience with phenibut is as part of a supplement called Relax-All from MRM. This also has Calcium, Magnesium, Tryptophan, Valerian, Inositol, Ashwagandha, Chamomile and Lemon Balm, though Phenibut is the featured ingredient.

This, of course, makes it impossible for me to know how much of the effect of this supplement is due to the Phenibut versus the other ingredients. I recommend it primarily for muscle spasms, anxiety and insomnia and have generally had very positive feedback in those who have tried it.

As mentioned, it may be dangerous to mix phenibut with alcohol or tranquilizers , yet many people appear to safely enjoy mixing phenibut with small amounts of alcohol.

GABOB has mild sedating qualities that are reported to become more pronounced when mixed with phenibut. I’ve found that phenibut also goes extremely well with a cognitive enhancer known as deprenyl.

Deprenyl (selegiline hydrochloride) is a moderate-level stimulant and antidepressant that has been shown to improve memory, protect the brain against cell damage, alleviate depression, extend the life span of laboratory animals, and heighten sexual desire in both men and women.

Deprenyl is available by prescription in the U.S., and it is primarily prescribed to help people with Parkinson’s disease, memory disorder problems, and sometimes depression.

However, a lot of healthy people also use deprenyl to improve their mental performance, and it is considered by many people to be a “cognitive enhancer,” or a “smart drug.”

Although deprenyl is a prescription drug in the U.S., it can easily be purchased overseas via the internet. I’ve personally found the combination of deprenyl and phenibut to be one of the best antidepressant formulas and social lubricants around.

A number of people that I’ve spoken with who suffer from social anxiety, and tried this combination, give it high ratings as well.

However, hands down, I most enjoy combining phenibut with flowers from the forbidden cannabis plant.

I find this healthy combination to be absolutely delightful, and one of the very best ways to relax after a hard day’s work.

More recently, I’ve been experimenting with Alpha Brain stacks. Alpha Brain itself is an uber-popular nootropic these days. By itself, it doesn’t do much at all.

But together with other potent nootropics, like Phenibut, it seems to have an additive/synergistic effect.

Namely, I’ve found that taking Alpha Brain with Phenibt helps lower anxiety even further than standalone Phenibut, and seems to slightly curb the next-day Phenibut Hangover (and desire to take it again).

Any advice on using phenibut to help with methadone withdrawal? I want to get off of this terrible drug and clean out my system. I am very frightened because I have used opiates for pain control for most of my 59 yrs. I am so tired and want it to end
Thankfully desperate

make sure you ween off of the methadone SLOWLY and take the phenibut with it every few days, otherwise if you take it any more often it will be a monster of its own. i recommend pure CBD as well as phenibut, you can get it for cheap at purecbdexchange.com. good luck!

Dear Linda, i would like to give you my opinion on how i got my life back after 5 yrs of being on high doses on Methadone (210 mg daily)
I have been miserable after 3rd yr on Methadone, i have developed extreme sugar cravings, food cravings (fast food), gained weight, developed diabetes 2, developed edema in my both feet.
I just had enough and started to plan how to get of of that monster, in the mean time i was taking Gabapentin which is very similar to Phenibut. i also found that Kratom helps big time with Opiate withdrawals, i bought bunch of OPMS Gold liquid bottles which are very expensive but work the best because it is extract.
There is an option to buy much cheaper Kratom (crushed leaves) and very important is to get RED VAIN because works best for withdrawals as it works on opiate receptors.
I would not recommend to anyone to do this option as i m not a doctor but it did work for me.
When i was ready i just QUIT Methadone cold turkey and before i did i used high dose of Gapabentin (3400 mg ) and maybe 7 grams of Kratom daily, and miracle happened, i waited and waited for Methadone withdrawals ti kick in but NOTHING happened for 3 months and i know that methadone stays in my body for long time as i m 310 pounds and 6,4 and also sticks in fat cells for up to 6 months.
Now is past 6 months and i m 100% sure i m CLEAN from Grand Daddy of them all (Methadone) 🙂 i did taper down my Gabapentin usage , but i need it for neurophatic pain, i also quit Kratom and had none of withdrawals as Gabapentin neutralizes that too.
Again, i m not medical professional nor GP, i just wanted to give my opinion to you with my experience with fight with Methadone.
I wish you all the luck Linda.