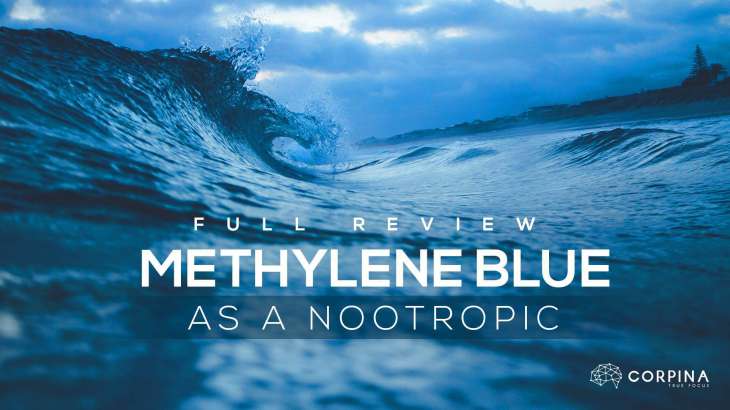 There are many different nootropics out there to try in the world, including the well-known racetams, vasodilators, stimulants, and even the strangest herbs you’ve ever heard of.  However, in the places where they are discussed, few people have covered ground on the elusive colored agent known as methylene blue (or MB for short).

Known by lab technicians and biologists as a stain for microscopic observation, MB has been in common use for science since the early 20th century. Only recently has its alternative use as a cognitive enhancer been discovered, and the standard effective dosage remains a mystery to the majority of people who have tried it.

Nonetheless, it is a very safe substance to ingest, having virtually zero risks or side effects at a reasonable dosage.

Why Should You Take Methylene Blue?

The main point of using MB is to increase concentration and mood, which can be attributed partially to its MAOI effects and influence on general metabolism. Some users have reported a subtle increase of baseline energy, which in itself can help with demanding intellectual tasks.

Another reason to try methylene blue is because it’s relatively inexpensive! If diluted properly, you can make a bottle costing about 4 dollars last for several hundreds or thousands of doses!

This is because the amount you need to take is exceedingly small, it is extremely potent. However, it is still perfectly safe if you accidentally take too much. It is better to take small amounts, as the mental effects only appear at a certain range in the spectrum of dosing.

Where To Buy Methylene Blue

Methylene blue almost always comes in a small bottle as a dark blue liquid, with the intent of being used either in the laboratory as a specimen stain or as a fish tank antifungal. To my knowledge, there aren’t any products on the market that specifically cater to its use as a nootropic.

A good place to find it is Amazon, with many selections of MB, or sites for scientific supplies. Occasionally, you can see it in pet stores as well for use with fish. (Interestingly, the FDA recently declared a shortage of MB, perhaps due to its rise in popularity among the nootropics community).

You’d probably be better off buying the brands marketed as stain, as it will be cheaper and let’s face it: it’s a little weird to be medicating with something meant for fish! One bottle (depending on size and concentration) should cost you about $4 to $12.

Methylene Blue is one of the more pleasantly-appearing nootropic substances. Instead of coming as a typical white powder in a bag, it usually appears as a dark blue liquid in a small plastic dropper bottle.

An important part of the proper use of MB is diluting it properly, which also produces a neat effect as a single drop precipitates into ribbons in water.

Now before you go ahead and start taking drops of MB out of a microscope stain bottle, it’s best to understand that the dosage you actually need is VERY low. In fact, some people have claimed that you only need doses of MB around 500 nanograms, or 500 millionths of one milligram.

However, the standard nootropic dose appears to be around 60 micrograms. I take about one to three micrograms, two to three times a day, and it works for me. In order to take the proper low dose, you need to dilute it quite a lot! Indeed, you’ll need some time and effort to do the math, and you’ll need some measuring supplies.

My method of measurement involves a couple of assumptions: that a milliliter equals about twenty drops, and that my original solution is 15ml 1% methylene blue, which means that each drop is about half of a milligram of MB. Since you have to prepare it yourself, it’s clear that using MB as a nootropic is a new idea that hasn’t been widely marketed yet.

However, it garners attention from those who are looking to build cost-effective stacks. The extremely low dosage and relative cheapness of the substance can allow a single bottle to last years!

How To Dose Methylene Blue

Once you have a solution, you may ask, “What do I do with this liquid stuff?” Okay, well you could in theory mix it in with a beverage or fill certain capsules with it and take it orally, yes. Some people will actually take their methylene blue with their regular drinking water, in fact.

This works, but you probably would need a somewhat higher dosage to compensate for the metabolism between your stomach and your bloodstream. The better way is to take it sublingually – under the tongue – with an eyedropper. It’ll get into your body quickly; you’ll notice the effects within minutes after administration.

Hold a drop or two under your tongue for about a minute, and be diligent not to swallow during that time. People who have trouble swallowing pills will find this to be liberating.  It doesn’t have much of a taste, but if you really pay attention it has an ever so slight bitterness to it, though it’s mostly too watery to tell.

I know what you’re thinking now, “Get onto what it does already!” Read on for the juicy details…

Methylene blue, like the infamous racetams, has its way of causing all sorts of different effects for different people. If you don’t measure quite right, you may be missing out on what is has to offer.

That’s not to say it’s guaranteed to work and be miraculous, but I will say that if it works right for you, it’s more than worth the time for preparation. The first couple times you try it, you might feel a bit strange.

I experienced a slight pressure in the front of my head that went away within a few minutes. The good news is, this stuff definitely helps me think! Within five minutes of sticking a drop of it under my tongue and letting it absorb, I notice that thoughts come quicker and clearer.

The biggest difference I’ve noticed is much better focus on my notes and work. It also helps me pay more attention to what I’m doing, even now as I’m writing this article. It also appears to lend me some extra baseline energy, especially on days where I hadn’t gotten enough sleep or simply felt tired.

Some days, it makes my muscles feel like they have more energy as well. Given the rarity of usage, I’ve only seen a few other reports on what methylene blue does, but I’ve seen anecdotal reports on it causing increased energy, decreased fatigue, and facilitated sociability.

My memory also seems to get a boost from it; I’m able to recall simple facts quicker than usual. Methylene blue works in the body as an antioxidant and an electron donor during ATP synthesis.

This means it can protect your brain from causing itself damage while making itself the energy it needs to function. No doubt, if you give your brain a chance to heal from normal operating stress, it will work better day to day!

Side Effects of Methylene Blue

Side effects are always a concern when taking new medicines or supplements. As a true “nootropic”, which should have little to no side effects, methylene blue is very safe.

However, it should be obvious that taking a ridiculous amount of it can have repercussions. Methylene blue is a MAOI (monomine oxidase inhibitor), which means that in sufficient quantities, it can cause trouble in those who are taking certain antidepressants like SSRIs and other MAOIs.

It can cause severe nausea in this case. But as I have said, it’s a very tolerable substance and you shouldn’t ever have any issues so long as you aren’t chugging bottles of the stuff.

If you’ve read about the potential benefits of methylene blue then tried buying it online, likely you’re scratching your head and wondering: where the hell can I but this stuff? Well, you’re not the only one. One of the most frequent questions I get in my inbox is people asking me where they can buy pharma-grade methylene blue.

Truth is, when I first started taking nootropics I ran into the same issue trying to buy methylene blue. I looked everywhere, starting on Longecity threads. I checked the MB dosing and product thread and indeed, there doesn’t seem to be a good source. I used to work in a lab and discreetly ordered some myself. For those of you who don’t work in biology labs, one of the writers for Corpina has this piece of advice: find it on Ebay.

He (my writer) sent me a link to the Ebay product he bought, but it has since expired. A little more snooping uncovered some r/Nootropics threads which point to this MB crystal on Ebay: http://www.ebay.com/itm/Pharmaceutical-USP-Grade-Methylene-Blue-Crystals-99-6-Pure-/171140878350

In the past, we’ve purchased samples from from Microscope.com, though I can’t confirm whether this bottle was labeled as: SAFE FOR HUMAN CONSUMPTION (do as I say, not as I do; always check for this label first!).

If you’re looking for a cheap & effective nootropic to help with focus, attention and recall, then I can definitely recommend methylene blue. The nootropics community needs a lot more research and input on it, so if you give it a go let me know what effects you experience. Good luck!

Where can I purchase Methlyene Blue in the US?

Have you tried bluebrainboost.com? The owner is a solid guy and afaik it’s very high quality stuff.

Just got a shipment from them. You’ll be pleased with the speed of their shipping.

Hello Dan! Can I translate this post to portuguese and put it on my website with the due credits?

“some people have claimed that you only need doses of…”

“the standard nootropic dose appears to be…”

No scientist or research study says any of this. Only random kids circle-jerking on the internet playing amateur pharmacologist.

No human study or Human-Equivalent-Dose of rodent studies goes below the milligram range.

The *lowest* possible effective dose I’ve seen for any purpose in rodents is 1mg/kg, which is often converted to 1mg in humans. *INTRAVENOUSLY*
MB is 10x stronger i.v. than oral.

Some medical MB treatments in human studies go beyond 500mg.

Be careful about nootropic / supplement websites. They pull dose ranges out of a hat.

For example, you only reach ID50 of MAO-A inhibition at 70-164nM concentration in the blood (2 studies conflict). You need to take orally 100mg to even get close to 50% inhibition. And clinically for depression, 75%+ inhibition is the target.

Many amateurs have been confusing i.v. and oral doses, or assuming sublingual is the same as i.v. (for many drugs it often is closer to oral, not i.v.)

Be careful with the supplement industry. It’s the wild wild west of misinformation.