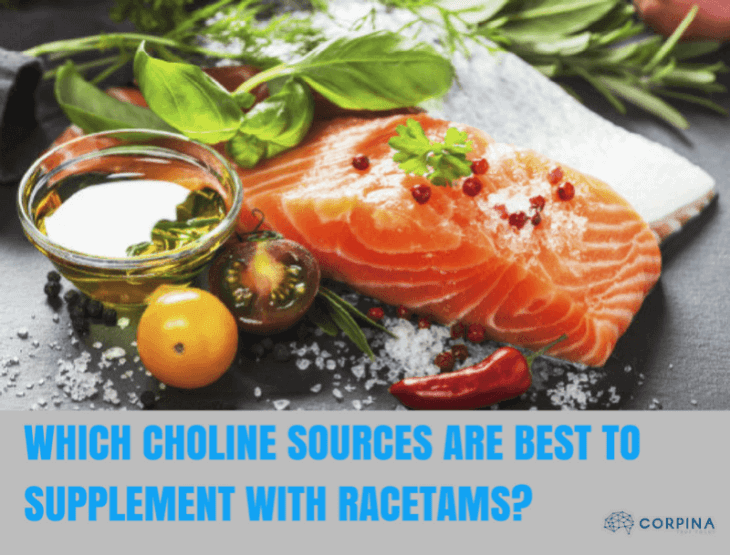 Which Choline Sources Are Best To Supplement With Racetams?

Do you know why people wear accessories? Let’s say you are someone with a beautiful face and a good physique.

All the dresses that you wear may suit you, but there are some small details that can make you look like the front page model of a fashion magazine. These are the accessories.

Just like how accessories add a final touch to give you that stunning fashionista look, Choline does the same when it is taken with Aniracetam or Piracetam.

Aniracetam with Choline gives you a boost in energy and motivation without the side-effects like nausea or mild headaches that are often associated when taking Aniracetam without Choline.

Why are they taken together?

Most of the users prefer to take Aniracetam with Choline because it makes it more effective. After decades of piracetam and other Racetams existing, it’s clear that the cofactor to the efficacy of these drugs is choline intake. As the racetams boost the production of acetylcholine in the brain, choline reserves are drained.

If the levels dip below the optimal point, users of racetams can experience mild yet irritating side effects such as brain fog or the infamous “choline headaches” reported by a large fraction of naïve racetam users.

The key to sticking to a racetam regimen without experiencing most unwanted side effects is supplementing on choline. Most of the time, if a typical nootropics user takes one of the many choline supplements available, it should fix any small ailments.

A common question from nootropics users is “which choline source should I be taking?” or “which one is the best?” There are many choices available, and each has unique properties that may influence which one is better for each individual.

There are four types of Choline and they are (click to scroll down):

What is the Best Choline Supplement with Aniracetam?

Just like how a polyester trouser and jacket combo that comes in a range of colors that can make you go green around the gills, the wrong choice of Choline supplement can totally destroy the effect of using a Nootropic drug.

Talk about Choline in its Lecithin form, it is least efficient and the worst supplement so far. Basically, its unhealthy because it is derived from soy and you need about 1200 mg or upwards depending on the person for it to be effective. That’s a huge dosage we are talking about.

Choline bitartrate is also inefficient and causes mild headaches instead of reducing it. The bitartrate form is considered to be not as effective as the other types and the primary reason for this is, Choline constitutes just 40% by weight in this avatar.

As a result, it is quite inexpensive and this form of Choline is comparable to the general intake of Choline rich foods. Also, it doesn’t increase the effectiveness to the desired level when taken as a supplement with a Nootropic stack.

Essentially being a Uridine supplement, CDP Choline packs a nice punch as a Nootropic supplement even though it constitutes just 18% by weight. CDP Choline is broken down into Cytidine and free Choline upon digestion. The human body converts Cytidine into Uridine, which itself is a Nootropic agent. Hence, CDP Choline makes it two in one Nootropic drug.

The general ratio of Aniracetam with Choline is of 4:1, i.e., if you are taking 10 grams of Aniracetam then you need to add 2.5 grams of Choline for the dosage to be effective. Most commonly derived from dairy products, it is proven to be very safe source that increases the cellular membrane structure.

We’re starting to get into the more “advanced” choline sources now folks! Alpha GPC is one of the newer and less-researched sources of choline. It has only recently become popular with users of nootropics, and it has cognitive benefits beyond the supply of choline the brain.

Alpha GPC is known to rapidly pass choline across the blood-brain barrier once ingested. It’s great if you want to get choline into your brain, and quite fast compared to other sources.

When I started using racetams, I had a problem with choline bitartrate getting into my system fast enough, and I found Alpha GPC to work much better for that. Besides being a speedy supplier, Alpha GPC by itself can be considered a nootropic.

It has been shown in research to relieve symptoms of Alzheimer’s, and increase memory and cognition in healthy individuals. Alpha GPC is significantly more expensive than the previous two forms discussed, and usually comes in doses of 300mg.

The other higher form of choline source is CDP-Choline, or citicoline. It’s been around longer than Alpha GPC has, and therefore has been researched more thoroughly. Some people opt to use CDP-Choline over Alpha GPC simply because more is known about it, and that it has more clinical evidence supporting its use.

Its mechanism of action includes an increase in the synthesis of phosphatidylcholine and the tripeptide glutathione.

As we saw with the soy lecithin, phosphatidylcholine is the intermediate chemical that leads to acetylcholine. Like with Alpha GPC, it does more than simply donate chemicals to the brain. It has been shown in research to act as a slight stimulant and increase the density of dopamine receptors in the brain.

In addition, it has been demonstrated to treat patients who have recently suffered from stroke or cerebral ischemia, and possibly could help with attention deficit hyperactivity disorder. Interestingly enough, you can see citicoline as one of the energy blend ingredients on bottles of 5-hour energy!

You can get it from LiftMode here.

If you aren’t sure which choline source is right for you, or you’re strapped for cash, the bitartrate form will work just fine for your dietary choline needs. It’s simply a choline molecule bonded to tartaric acid, and will cover your body’s and brain’s basic needs.

However, for nootropic use it may not be the best, as it doesn’t penetrate the blood-brain barrier quite as effectively as some of the other sources available.

Some people find that it works just fine as an adjunct to racetams, and feel no difference as compared to other sources. However, some people will need choline sources with the slightly better absorption.

The average dose of the bitartrate form is 250mg, along with your racetam of choice. Some people will find they need an extra dose to avoid headaches, but this depends whether or not you’re taking a high dose of racetams as well.

Another relatively cheap and basic choline source, Soy Lecithin, is good choice if you’re not quite sure what to take. Derived from soybeans, it’s a very natural and safe choice for those who need to supplement their choline levels. Instead of supplying molecular choline, however, it provides the chemical phosphatidylcholine.

This is an intermediate product between choline and acetylcholine, and helps you skip a step in the synthesis of the final product your brain needs to support racetam usage.

However, absorbance is still questionable when using lecithin. The average dosage for this supplement is anywhere between 500mg and 1000mg, usually in gel capsules.

One more thing worth mentioning is that Acetyl L-Carnitine (or ALCAR for short) can act as a source for choline supplementation.

An article published in the Journal of Neuroscience Research explains that ALCAR boosts cholinergic activity, supporting the actions surrounding racetam use.

Conclusion: try them all

No matter which choline source you choose, be sure to try a couple different forms beforehand. Do your research on each, and what to take away from this article are the basics behind each of them.

We wish you the best of luck, and don’t forget that these should all work. Some people may find other forms more pleasing than others, but they all provide the much-needed choline!

Racetams vs other products

[…] are many forms of choline available on the market, all with their own pros and cons.  Users on the main uridine […]