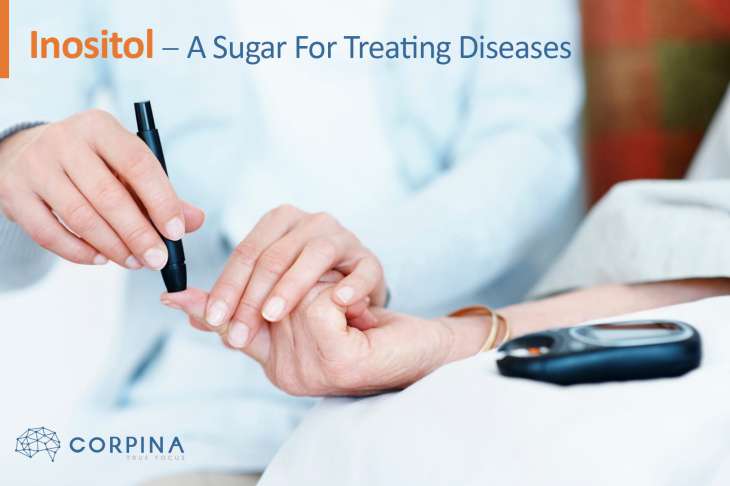 Sometimes, it can be truly surprising to see what substances have nootropic effects, or help to maintain our health in general. We might look at a type of material that seems so ordinary, that it seems impossible that it has a special place in neurochemistry.

One of these substances is inositol, a unique carbohydrate that is required for many of our bodily processes. Because it is an important nutrient, supplementation has shown promise in the treatment of some illnesses.

Inositol (commonly referred to as myo-inositol) is a molecule consisting of six cyclohexane alcohol molecules which plays an important role in many biological functions. Most importantly, it is an integral part of the actions of secondary messengers in cells. This means that it helps to send signals from the outside of a cell to its nucleus and therefore strengthen certain effects, as similarly observed in the CILTEP stack.

Areas of the body where this is especially critical, such as the nervous system, can benefit from having an ample supply of inositol at the ready. (**Note: the CILTEP Stack is now available for purchase for the first time ever).

Although it’s not technically considered a sugar, inositol can effectively act as a sweetener. The carbohydrate has approximately half the sweetness of table sugar and it can be found naturally-occurring in oranges and cantaloupes.

Functions in the Body

As a crucial factor for secondary messaging, inositol is a necessary nutrient in multiple systems of the human body.

Nerve function, as mentioned, is one of the biggest concerns, especially to those of us who seek to optimize our brain health. Signal transduction, as well as growth guidance and membrane potential, are some of the processes in the nervous system that heavily rely on the presence of inositol.

There are also less-asserted but still essential functions involving inositol within cells of the body. Calcium levels can be regulated, which is important for cellular ion channels. Insulin’s effects can be more effective, since secondary messaging is involved with metabolism. Along with that comes improved breakdown of fats and reducing blood cholesterol levels.

Obsessive-compulsive disorder often centers around themes, such as a fear of getting contaminated by germs.

Perhaps the most interesting fact regarding inositol is its potential in treating various diseases, especially mental ones.

In a double-blind study, inositol was shown to significantly alleviate symptoms of depression in patients given 12 grams of it per day for four weeks. An additional benefit was that there were no changes to liver or kidney function, showing promise for the long-term safety of the treatment. While the dosage is certainly high (easily several spoonfuls of powder), it seems to be an effective natural solution.

Another study, involving the treatment of Obsessive-Compulsive disorder, showed a similar level of efficacy. Patients who took 18 grams of inositol per day for six weeks showed much lower severity of symptoms of OCD, with an effectiveness equivalent to that of SSRIs, the typical front line drugs for the condition. Again, safety was assured through a lack of apparent side effects.

Moreover, there is evidence to support inositol’s ability to treat panic disorder as well as bulimia. There is also a potential link between inositol and the treatment of bipolar disorder using lithium. According to research done with inositol reuptake inhibitors, the mechanism of action of lithium may involve increasing concentrations of inositol in the brain.

Outside of the realm of mental disorders, inositol can potentially be used to treat some hormonal issues in womens’ health. Studies have investigated its usefulness in treating symptoms of polycystic ovary syndrome and post-menopausal dysmetabolic syndrome. In animal studies, inositol also helped to fight certain types of cancer, though not act as a complete solution.

Status as a Nutrient

While not currently available as a prescription medicine, inositol is commonly used as a supplement by people who suffer from anxiety and the occasional unexplained blues. As a general health factor, it can be recommended for just about anyone! Since the body can produce some inositol on its own, it is not considered an essential nutrient such as a vitamin (it was once considered a member of the B-vitamins). Some people may require more from their diet than others, which is where supplementation can really help.

Deciding on how much inositol to take is relatively easy and worry-free. In the studies where inositol was presented as a treatment for mental disorders, the amount needed was quite large, indicating that a sizable margin of error is allowable. If being used as a supplement, you need at least 2-4 grams to begin finding a proper dosage, i.e. “start from there and work your way up”. As such a non-potent substance, you can almost not even care how much you try until you find just the right amount.

Inositol is by far the safest substance we’ve reviewed on this site. Not only does it inherently lack side effects, but it remains so when you approach megadoses in the range of dozens of grams. At that point, you’re more likely to suffer stomach upset just because you’re eating so much sugar!

As it’s already a fairly popular supplement, inositol can be found in nearly any vitamin or health food store in the form of (usually) 500mg pressed tablets (for example, here). However, considering the high doses needed for inositol to exert its effects, I would recommend finding a supply of bulk powder. Online, there are many sellers who stock bulk inositol powder. My supply comes from iHerb, which sells 1 pound (around 400 grams) for about $28.

They were kind enough to provide a 1cc measuring scoop, which holds between 1 – 1.5 grams of the powder.

Once you have your product, taking it is easy! Since it tastes and behaves like sugar, administering the supplement is as simple as dissolving a bunch of it in water, or just swallowing the powder as-is.

Inositol, despite its simplicity and relative inertness, has a powerful effect in treating disease when dosed properly. There is a great deal of research backing it as a potential medicine, so much that it seems the only thing blocking it from becoming a prescription drug is the large amount you have to take.

For general health, it would appear indicated as a neuroprotective substance that we need to ensure we have proper levels of! Who knew that something sweet would be this…sweet for the body?