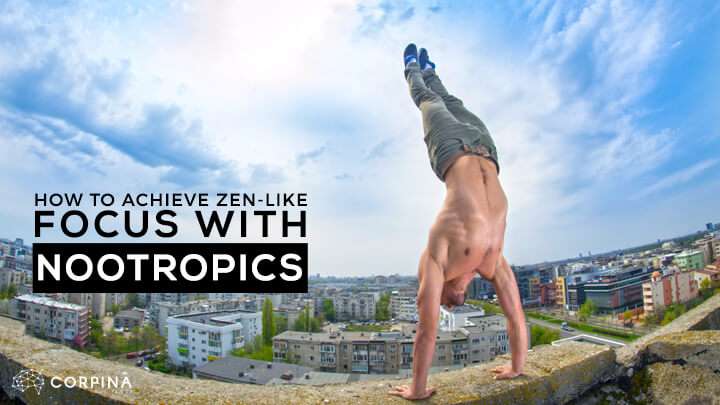 When I think back on those occasions when I’ve been most productive, it has always been when the work felt effortless.

These episodes of intense focus and creativity did require time and energy, but I felt so absorbed in the activity that I hardly noticed it.

This mental state of effortless-work is referred to by psychologists as ‘flow’.

The good news is that there are are things we can do to increase our ability to experience this useful mental state, and this includes the use of nootropics.

Mihaly Csikszentmihalyi is a psychology professor who specializes in happiness and creativity.

His book, Flow: The Psychology of Optimal Experience (1996) is one of the most respected texts about the experience of flow – his TED Talk called the Flow the Secret of Happiness is definitely worth checking out.

Csikszentmihalyi defines flow as the “the holistic experience that people feel when they act with total involvement” – it means that the person is so involved in what he/she is doing that everything else is forgotten.

Flow can sound like a mystical state – the classic example is the top athlete who ‘enters the zone’ and pulls off a mind-blowing performance. The reality is that this state is probably something that all humans experience from time to time. If you have ever become so engaged in what you are doing that you lost track of time, you have already experienced flow.

One of the problems with talking about flow is it all sounds a bit vague and subjective and therefore unscientific. This is why attempts have been made to describe it more objectively. David Farmer, writing for the management consulting firm Austega, mentions 7 characteristics of flow for business professionals, including:

It is not necessary for all of the above factors to be present in order to experience flow, but it does give a better idea of what is involved.

The Benefits of Flow

My definition of the perfect job is where I’m being paid heaps of money to do something that I’d happily do for free. The wonderful thing about flow is it makes this dream a reality. Not only does it take the effort out of work, but it also means that I’m performing at the peak of my abilities.

Instead of worrying about deadlines or being fired, my toughest challenge becomes tearing myself away from work long enough to eat or go to the toilet – I know which set of problems I’d prefer.

The type of benefits you could expect by experiencing more flow in your life would include:

I’ve come to the realization recently that being good at my job just isn’t enough. The problem is that ‘being good’ is the bare minimum requirement for most careers – there are too many people out there who are great at what I do. If I want to succeed, I need to spend more time in a state of flow.

The Science of Getting in the Zone

The ability to focus on and appreciate the present moment can be increased using practices such as mindfulness meditation.

One of the nice benefits of this particular technique is you can practice mindfulness while engaging in most tasks – this means you may be able to slip into flow naturally.

The science of flow is pretty new, and we are still only in the early days of smart drug research.

There is the exciting possibility that nootropics may make it possible to enter this mental state on-demand.

There are already a number of substances you can use to increase your focus and such as:

People who can consistently get their brains into a flow state are like Neo in the matrix.

They dominate their professions and have healthy, fulfilling relationships.

It is imperative to every person’s success and emotional well-being to reach flow state and stay in flow states as often as they can.

Nootropics offer a way to get you there consistently.