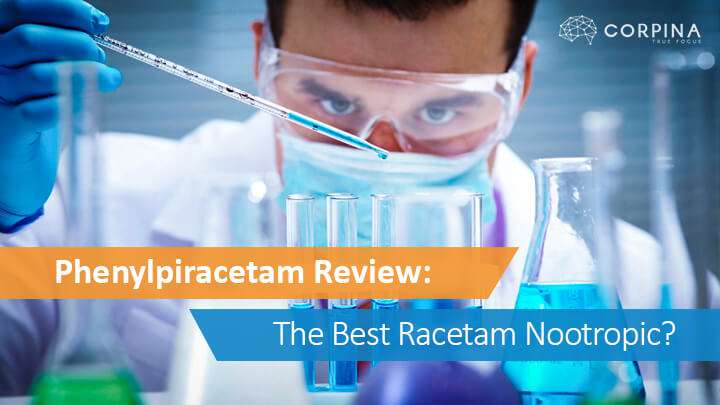 In 2006, Olympic skier and silver medalist Olga Pyleva was disqualified from the Winter Olympics after testing positive on a drug screening.

It turned out that she had been taking a relatively new pharmaceutical that is known to enhance physical endurance and focus.

Olga claimed she had no idea she was ingesting this chemical, and it was contained as one of the ingredients in a medication prescribed to her by her doctor.

All of this time she was taking Phenylpiracetam, a potent nootropic developed in Russia that shows a great deal of promise in extending the potentials of both athletes and big thinkers alike!

Phenylpiracetam has a familiar sounding name – it includes the chemical that has arguably started the whole concept of nootropics itself, and is one of the most common supplements taken by enthusiasts of the boosting of the mind.

Indeed, Phenylpiracetam is simply the combination of piracetam and a phenyl ring structure, which defines it as a unique and much more potent substance.

Those with a basic knowledge of chemistry will note that a slight change in structure can mean a huge difference in properties, and the average dose needed for efficacy is about 30-60 times smaller for Phenylpiracetam than the simpler piracetam.

The Wonderful Effects of Phenylpiracetam

As a member of the racetam family, Phenylpiracetam boasts some of the classic effects as the other members of its family, as well as some very interesting additions that make it worthy of much attention from nootropics followers.

The usual pro sides of racetam-class chemicals are the potentials for increased focus, creativity, and memory function.

The cons are of course, the need to take choline with them and the paradoxical “brain fog” that can occur in some individuals. What’s significantly different with Phenylpiracetam, however, is that is goes beyond the mind in terms of its benefits.

One of the most valuable traits a nootropic can have is having benefits throughout the body, not completely centralizing its effects in the brain.

Phenylpiracetam has been shown to increase one’s physical stamina and grant a resistance to cold temperatures – both great for many people in its home country of Russia and to the unknowing Olga in the winter Olympics.

In fact, the performance enhancement benefit is great enough that it had to be banned by the World Anti Doping Agency. Surely it must be good if they don’t want athletes to use it!

In general, a person who takes phenylpiracetam can expect to feel an increased sense of focus, for starters. Some people expect to feel a rush of energy, based on its use by athletes.

This is not necessarily the case, although it does provide a very noticeable sense of tolerance to physical stress. You can go longer without tiring out, and maintain a consistent effort.

Another possible benefit is an increased ability to learn, due to phenylpiracetam’s mild effect on the NMDA glutamate receptor.

As with piracetam and many other racetams, phenylpiracetam is quite safe in terms of side effects and dosing. The worst side effect (so long as you don’t ridiculously overdose) is a small choline deficiency headache, which is usually solved by adequate choline supplementation.

One other thing to keep in mind is that due to the higher potency of phenylpiracetam compared to piracetam, it is especially important to do measurements properly if you use it in powder form. This often requires the use of a milligram scale, which can be found cheaply in vitamin stores or online.

Phenylpiracetam can either appear as a white powder or a small compressed tablet in a blister pack. The latter form is usually in the case of a prescription, and otherwise a consumer would expect to get it in a bulk powder form.

Until recently, it has been impossible to get Phenypiracetam outside of Russia, and there are only a few known sites that carry it. A good place to buy it is Nootropics Depot, and it should cost about $30 to $40 for 5 grams.

The dosage should be anywhere between 20 and 100 milligrams a day, and should be accompanied by a standard dose of whichever choline source is preferred. Some people won’t need this, although it’s a good precaution.

Phenylpiracetam is an exciting, newly-accessible nootropic that is truly fit for an Olympian.

It has the potency that hardcore athletes and intellectuals alike will appreciate, and the status of a racetam that is well known and researched.

Check it out here.

Which Choline Sources Are Best To Supplement With Racetams?

Racetams vs other products