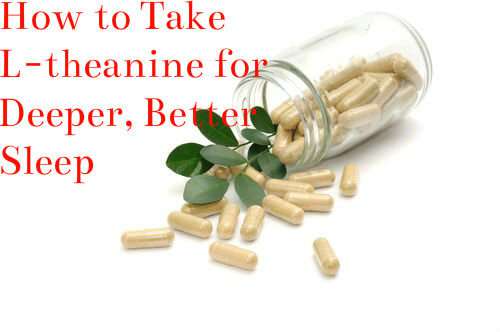 If you’re like me, getting a good night’s sleep can be a challenge. It’s not unusual for me to get up and down three or four times a night. A natural product, L-theanine, is a great way to counteract insomnia and it can also be used for problems with concentration, sleep apnea, anxiety, and more.

Although relatively new to the US market, L-theanine has been used safely for decades in Japan. It’s found in green and black teas. Tea is a native plant of East Asia. In 1964 L-theanine was approved to be added to all foods, including herbal teas, soft drinks, chocolates – all foods, in fact, except baby foods.

Many Americans have sleep issues. The Centers for Disease Control classifies lack of sleep as an actual public health problem. Lack of sleep is linked to car wrecks, industrial accidents, and medical conditions. People who don’t get enough sleep are more likely to suffer from high blood pressure, diabetes, depression, cancer, and even a shorter life.

The age-old question is, how much sleep does a person need? Small children should sleep 10-12 hours a day; teenagers need 9-10 hours a day and for adults, 7-8 hours a day is optimal.

How Can I Get L-theanine In My Diet?

The good news is that adding L-theanine to your diet is not difficult.

Pills or powder, or tea?

L-theanine is found naturally in green and black tea. According to the University of California at Berkeley, L-theanine alters the levels of some neurotransmitters and has a calming effect that counteracts the caffeine in the tea. The combination of caffeine plus L-theanine aids in accomplishing mental tasks and produces a feeling some call “alert calmness.”

So how much L-theanine is there in a cup of tea? Researchers at the University of Bristol experimented to find out how much l-theanine can be found in a cup of normally brewed commercial tea. They discovered that longer brewing times led to higher quantities of the amino acid, but on average:

In another study, researchers in the Netherlands, measuring brain wave activity of test subjects, learned that anxiety was significantly reduced after drinking only a couple of cups of tea.

If you’re not a tea drinker – or you can’t drink it without adding a lot of sugar, which you don’t want – pills containing L-theanine may work better for you.

Health food stores and more mainstream stores like GNC are good sources to find the pill form of L-theanine. You can also easily get capsules online. I really like this patented form of L-Theanine by Sports Research as I feel happier, relaxed, calm, alert, and focused just after a few days of taking it.

How Does It Work?

L-theanine is a water-soluble amino acid and it increases levels of dopamine and GABA (Gamma-aminobutyric Acid) in the brain. GABA is actually made in the brain. GABA relieves anxiety, improves mood, and may reduce the symptoms of PMS and ADHD, according to Web MD.

Like Valium, L-theanine affects GABA activity, and L-theanine may also affect dopamine and serotonin levels in the brain.

The GABA found in l-theanine may also be effective for high blood pressure and motion sickness. It’s also been shown to improve test performance without making you agitated like a cup of coffee.

L-theanine is considered very safe. Few side effects have been observed, but some users have experienced headache, GI symptoms, or dizziness. There is no information about the safety of its use during pregnancy.

How much L-theanine should you take for sleep?

The L-theanine sleep aid dosage is usually listed as 100-200 mg. That amount can be taken 2-3 times a day. As mentioned, one dose is about the equivalent of 10 cups of tea. Another source recommends 200-250 mg. As you can imagine it is quite impossible to get an overdose of L-theanine from drinking tea 🙂

There is evidence to suggest that people who suffer from sleep apnea (a breathing disorder that interrupts a person’s sleep) can benefit from L-theanine. According to How Stuff Works, L-theanine found in green tea works great for sleep apnea. The study showed using L-theanine indicated that it was helpful in improving the reduced performance that results from fatigue and sleep apnea.

The best way to get to sleep and stay asleep is to be in a relaxed state. How does L-theanine induce relaxation? One way is that it reduces sympathetic nervous system activation in stressful situations.

L-theanine for Anxiety and Other Issues

L-theanine also has antioxidant properties. Antioxidants protect the body from harmful free radicals, which are molecules that can proliferate in the body and lead to heart disease, arteriosclerosis, and cancer.

In 2010, Dr. Michael Ritsner of the Technion–Israel Institute of Technology published an article in the “Journal of Clinical Psychiatry” that concluded that when 400 mg of L-theanine was added to an existing pharmacotherapeutic regimen, it produced a statistically significant reduction in the symptoms of anxiety. In a less rigorous study from “Biological Psychology” in 2007, Dr. Kiriya Kimura of Nagoya University found that L-theanine supplementation resulted in a reduction of heart rate and levels of stress-indicating hormones. (Source: Livestrong)

If conventional methods fail and you don’t want to take a prescription medication, consider L-theanine as a sleep aid. Green or black tea can be found in most grocery stores. In a pill form, L-theanine can be ordered online or found in many health-food stores such as GNC (General Nutrition Center).

Isn’t black and green tea bad for sleeping as it contains caffeine, which is a cns-stimulant? In my opinion isolated l-theanine or suntheanine are better options for sleep.