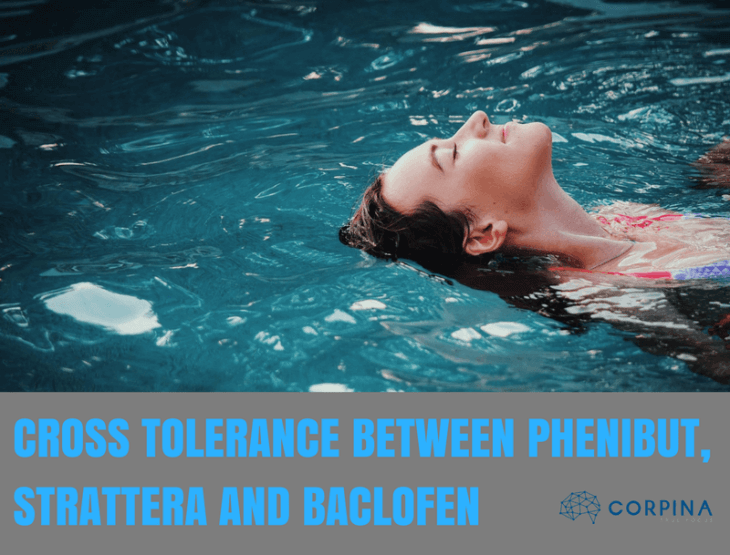 Both Phenibut and Strattera fall under the umbrella of nootropics, or ‘smart drugs’ which enhance cognitive functions like memory and intelligence.

Strattera (in the UK, Reboxetine)  is the brand name of atomoxetine, which is approved by the FDA for the treatment of ADHD.p

It is a selective norepinephrine reuptake inhibitor, and a non-stimulant which can improve concentration.

Phenibut is a derivative of the naturally occurring neurotransmitter GABA (gamma amino-butyric acid).

While Phenibut is not FDA approved nor has its effects been studied on humans, it has been used in Russia for decades as a neuro-psychotropic drug.

Phenibut is used off-label to treat (usually as self-medication) several anxiety-related or other issues such as stress, fear, insomnia, alcoholism, PTSD, and chronic fatigue syndrome.

In recent years, it has garnered mainstream appeal as a nootropic study drug on college campuses, loved for its ability to improve cognitive functions like memory, attention, and wakefulness.

While Phenibut is not approved for use as such a drug (and is illegal in many countries), it is still available legally in the United States as a nutritional supplement.

Also, because of its relaxation and mood enhancement properties, Phenibut is used to offset the side effects of other stimulants, such as the ADHD drug Strattera.

Do Phenibut and Strattera compound effects?

Phenibut is a dopamine inhibitor and has a tranquilizing effect on patients. Atomoxetine helps to treat ADHD much slower than amphetamines and methylphenidates but without their side effects.

Some internet forum comments show that the two drugs may work effectively together to reduce anxiety.

However there is very little data available to support this claim. Check with a doctor before combining Phenibut and Strattera.

How to measure doses for Phenibut and Strattera

Since there is little research available on Phenibut use among people and its effects, dosage depends on several factors including age, sex, health, genetic background, and especially any existing health disorders and medications.

In general, however, it is recommended that Phenibut be taken in one to three-day cycle that is followed by a period of 2 or 3 days of abstention from Phenibut.

This is to avoid its strong withdrawal effect.

Take Phenibut on an empty stomach (or near-empty)

When taken on its own, Phenibut is recommended to be taken on an empty stomach, spread across two to three doses.

Phenibut dosage for the day should begin with a 1 gm dose (1.5 gm if you weigh more than 210 lbs) the first thing after waking up.

Food many be eaten 45 minutes after the first dose is taken. For help with sleep, take Phenibut half an hour to 2 hours before bed.

After a 5=hour evaluation period to check for a positive effect of the drug, an additional 1 or 2 pills of 1 to 1.5 grams may be taken. However, use should be restricted to 4 gm at most for a period of 24 hours.

Anything above this level of dosage can result in excessive sleepiness and withdrawals.

Strattera is a daytime drug

Strattera can be taken with or without food and doesn’t need to be tapered when discontinuing. For adolescents and children over 70 kg and for adults, the drug is usually started at an initial dose of 40 mg daily.

The daily Strattera dosage may be a single morning dose or split up into evenly divided doses to be taken in the morning and the late afternoon.

Although Strattera is not technically a stimulant, it has stimulant-like effects. Don’t take it too late in the day or you won’t be able to get a good night’s sleep.

Is Strattera an alternative to stimulants?

Stimulants may cause mild increases in blood pressure and heart rate, so as long as your physician indicates that your medication is not contributing to increased problems with blood pressure or heart functioning, there is little reason for health concerns or to discontinue the drug.

Strattera is a good alternative to the stimulants; Phenibut is a pseudo-stimulant, and thus these drugs have the potential to complement each other.

Medications are the most effective type of treatment for adults with A.D.H.D. But there is a form of psychological treatment known as cognitive-behavioral therapy (CBT) that focuses on training compensatory skills to deal with the deficits in the brain’s executive functions that occur with the disorder.

Studies show such treatments increase the benefits of medication and can even help when someone is off medication, but not to the degree that medication can.

Regular physical exercise can also help immensely to combat the symptoms of A.D.H.D. And coaching can also help with organization of life activities, motivation and follow-through on goals and commitments.

Side effects of using Phenibut and Strattera together

One of the few Phenibut side effects includes withdrawal (and ineffectiveness of the drug due to tolerance), which happens very often if the recommended cycle of use and cessation isn’t followed.

The observed Strattera side effects, while not as severe as those that are caused by a stimulant, include dizziness, mood swings, nausea, appetite decrease, tiredness and upset stomach. In 2005, the FDA issued a warning regarding the use of Strattera on children and adolescents:

Pediatric patients being treated with Strattera should be closely observed for clinical worsening, as well as agitation, irritability, and unusual changes in behavior, especially … at times of dose changes, either increases or decreases. This monitoring should include daily observation by families and caregivers and frequent contact with the physician.

The announcement followed a study which showed that increases in suicide rate among children and adolescents suffering from ADHD was directly corrected to the use of this drug.

Given that Phenibut withdrawal leads to debilitating anxiety, even depression, strattera and Phenibut should be taken together with extreme care.

Many stimulants are anxiogenic because they are gaba-antagonists. Strattera, on the other hand, is quite neutral in this regard.

Some users report anxiolytic effects from Strattera, but for many it simply calms the mind enough to become aware of anxiety in the body, but not relieve it.

Add Phenibut into the mix, and you have a powerful anti-anxiety combination.

When to use Strattera with stimulants

We’ve covered Phenibut’s ability to lower stress and anxiety, but it’s also a dopaminergic compound (triggers the release of the neurotransmitter dopamine, which regulates the pleasure-pain cycle).

This means that Phenibut is a mild stimulant, and the social confidence users feel while on the drug is a combined lowering of anxiety through GABA and confidence boost through dopamine release.

With that in mind, it’s important to look at what happens when we combine Strattera with stimulants.

The two medications can complement each other, addressing symptoms arising from both neurotransmitter systems. For a few patients who were taking both medications, this seemed to be working for them.

The researchers concluded that the association between stimulant treatment and success in Strattera treatment may suggest a benefit in combining the two medications in the treatment of ADHD. They added that additional efforts to identify predictors of success under atomoxetine treatment need to take place.

Pregnant and nursing moms: steer clear of this combo

The effects of Phenibut during human pregnancy have not been studied extensively, and not much is known about its effects on a fetus. As a result, pregnant and breastfeeding women should refrain from using it.

Furthermore, atomoxetine has been assigned to pregnancy category C by the FDA, meaning that fetotoxicity has been observed in animal studies.

Again, no human trials have been conducted looking at strattera use during human pregnancy. Even so, atomoxetine should only be given during pregnancy when the potential benefits far outweigh  potential risks to the fetus.

Phenibut and Baclofen: which is better?

The old muscle relaxant drug baclofen is a GABA-B agonist. Phenibut a popular nootropic and social anxiolytic, is another GABA-B agonist (with low level GABA-A activity) that is presently regarded as a sort of natural, dietary supplement.

GHB, a popular party drug, is a GABA-B agonist much alike Phenibut and baclofen, although this may only be part of its action.

In some circles baclofen is being hailed as a new treatment for alcoholism (in very large daily doses), and also an anxiolytic in some cases, and Phenibut is also regarded as an anxiolytic by some.

There are claims for both substances having some anxiety-reducing and recreational potential in the context of recreational use.

Dr. Olivier Ameisen, who treated his own alcoholism using massive doses of baclofen and who wrote “The End Of My Addiction”, has also expressed interest in GHB for alcoholism treatment.

It’s been medically used in Italy for this purpose. This further suggests similarities between baclofen and GHB.

There is a small chance that you will experience shortlived withdrawals because Phenibut is said to also act on GABA-A at higher dosages (which 4g probably is) and has some dopaminergic action. But frankly, you should be fine. If all else fails you can simply take some Phenibut alongside the Baclofen and taper it off from there.

Long term users of Phenibut often find it to be very helpful toward alleviating anxiety.

Tasks like work presentations, speaking in front of a class full of adults, and walking up to strangers simply asking them something all seem effortless, whereas they previous were next to impossible.

Baclofen typically keeps users away from drinking alcohol, whereas this is not always the case with Phenibut since people take Phenibut recreationally. Just start slow and titrate higher when using either.

How do you feel after taking Phenibut or baclofen?

Phenibut feels a little bit euphoric and more calming than baclofen (though both can induce euphoria). In essence, this euphoria is the reason Phenibut has such a high addiction potential compared to baclofen.

Phenibut tolerance happens rather quickly for many, whereas baclofen tolerance requires very high titrations (150 to 200mg).

Baclofen and Phenibut are very similar chemically (+/- a chorine atom). Both are GABA-B agonists, but Phenibut also has GABA-A activity. Baclofen is being used experimentally to treat alcohol withdrawal.

The biggest hurdle with Phenibut is figuring out the equivalent dose for the baclofen. There is no exact science, but 300mg Phenibut is about the same 20mg Baclofen after 2 weeks.

Rather than replace one with the other, try substituting in an anti anxiety drug that doesn’t build tolerance or withdrawal: valerian root, kava kava, or St. John’s Wort.