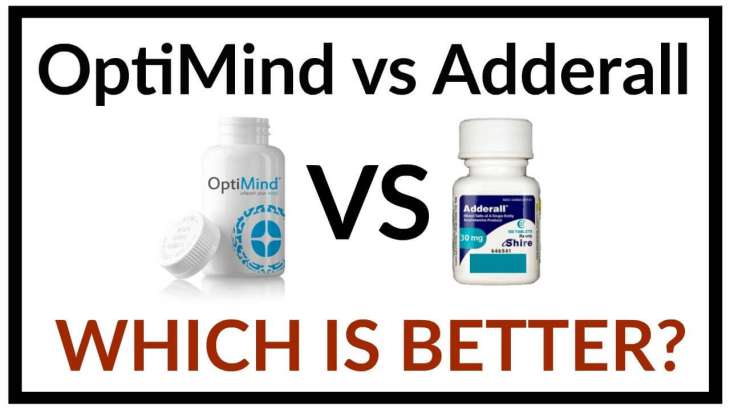 Adderall is one of the most popular prescription medications in the United States.

According to the Citizens Commission on Human Rights, over 5 million Americans are prescribed the medication each year, primarily to treat ADHD.

Adderall has an even more common, though non-prescription, use. Thousands of people, mostly high school and college students, take the drug because it enhances mental function, especially focus and memory.

Unfortunately, Adderall is also highly addictive. Thanks to both its amazing mental benefits as well as its composition of amphetamine and dextroamphetamine, many regular users find themselves physically and mentally dependent upon Adderall before long.

That’s exactly where Optimind enters the picture. An all-natural dietary supplement, Optimind utilizes a proprietary blend of herbs and vitamins to improve memory, learning retention, and overall focus without the dangers of abuse or addiction.

I wholeheartedly believe it’s the best safe substitute for Adderall. I’m very excited to break down the ins-and-outs of Optimind vs. Adderall for you in greater detail below.

It’s part of a group known as nootropics. This group of drugs, supplements, and substances are known as smart drugs and cognitive enhancers.

The reason for those nicknames is pretty straightforward. Simply put, nootropics are made up of ingredients that improve mental function and improve the mood.

Thanks to just how effective they are, nootropics have been adopted by college students and professionals, including many of those in Silicon Valley and even Wall Street, to get the cognitive results they demand without the negative consequences of Adderall.

Sounds pretty great, doesn’t it? Well, it gets even better because Optimind is one of the best nootropics for memory and brain health. It has proven results from thousands of users.

But enough chitchat – what exactly is Optimind? The nootropic supplement is composed of 12 ingredients in total. These include:

If you’re like most people, you probably don’t recognize many of these ingredients, aside from caffeine and taurine.

If you’re like me, you probably immediately assumed that the caffeine is responsible for most of the supplement’s effects when you first read through the ingredient list.

You’re only partially right. Although caffeine indeed does a lot of the heavy lifting, taurine and GABA provide substantial benefits as well.

As for caffeine, it’s positive effects are already well-known by most people. In addition to giving you a short-term boost of energy, it’s also been shown to improve both short-term and long-term cognitive function.

Delving even deeper into the ingredients list, it becomes clear that every single ingredient in Optimind has a purpose. For example, tyrosine boosts mental awareness while alpha lipoic acid prevents cognitive decline.

The only problem I have with Optimind is that the company doesn’t tell you how much of each ingredient the product contains. It does list the amount of caffeine and vitamins, but specific amounts of the other ingredients are left off.

This isn’t necessarily a big deal, but it does leave one wondering if Optimind contains enough of these ingredients for their benefits to actually be present in the supplement.

Similarities Between Optimind and Adderall

The effects of both Optimind and Adderall are very similar to each other.

Take either of the two, and you’ll likely experience noticeable effects when it comes to energy levels, alertness, and focus.

Both Optimind and Adderall make it that much easier to stay on task. You’ll likely notice that otherwise boring, tedious tasks are now very easy to complete.

Another similarity between the two is that they create both short term and long term effects. Like Adderall, the effects of a single dose of Optimind lasts for several hours at a time.

In fact, Optimind is formulated for 40% short-term effects and 60% long-term effects. Adderall’s effects are experienced at roughly the same rate.

The last similarity I’d like to mention here is that neither Optimind or Adderall produces any jitters during use of a normal amount.

Differences Between Optimind and Adderall

Despite the many similarities they share regarding their effects, Optimind and Adderall are quite different.

The main difference is obvious. Adderall is a strong medication that requires a prescription for legal use, while Optimind is a naturally-formulated nootropic supplement that does not require a prescription (meaning that anyone who wants to can use it).

In addition to this, Optimind isn’t addictive like Adderall can be. It doesn’t create a physical or mental dependency, even over long-term use. You can stop using Optimind at any point without experiencing a single withdrawal symptom.

Along with its lack of addictive qualities, Optimind also doesn’t produce a crash after its effects wear off.

Thus, Optimind stands as an effective, alternative to Adderall with long-term use potential.

Adderall, on the other hand, often leaves users feeling groggy, tired, and a little apathetic the day after use (unless continual use is sustained).

Alright, back to the main question at hand: Optimind vs. Adderall. Which one is best for you?

If you’re experiencing any of the common symptoms of ADHD, then I strongly recommend visiting your doctor to see if Adderall is right for you.

The medication is specifically designed for those struggling with ADHD and can work wonders for those afflicted by the condition.

If you don’t have ADHD, it’s still possible to acquire Adderall without a prescription, but there’s no reason to do so when Optimind is an option.

Not only is taking Optimind legal, even without a prescription, but it also provides almost all the advantages of Adderall without any of the disadvantages.

Though Adderall and Optimind are very similar, Optimind is by far the better choice, except for those with a medically diagnosed condition like ADHD.

I encourage everyone else to:

And as always, don’t hesitate to ask any questions you might have regarding Optimind, Adderall, or how the two compare in more detail!

I have a quick question. I know a lot of people have been taking aderall not only for the cognitive benefits but also because of the appetite suppressing abilities… what are your thoughts on that? Does Optimind have any of that?