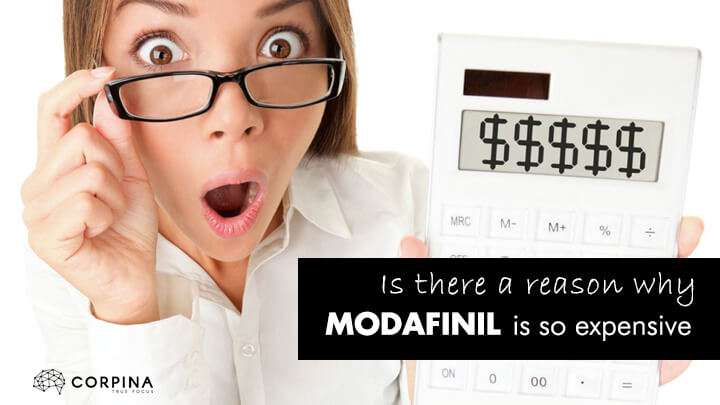 If you’ve looked into buying Modafinil (or any of its analogues) online, one of the things you may have noticed was that it ain’t cheap.

Vendors like Duckdose sells Modalert from SunPharma, with varying prices. Small orders of Modalert 200mg will run you anywhere from $1-2 per pill, depending on where you shop.

Why does it cost so much?

There are actually multiple factors involved here that we’ll try to explain.

Cephalon’s Provigil is as popular as it is an effective medication for those who need it. Combined with it’s low potential for side effects and high efficacy rate are at least a part of the reason for its increase in cost. (Provigil made $475 million dollars on their brand name Modafinil in 2005.)

Provigil’s brand name Modafinil was one case where a situation known as “pay for delay,” that the Federal Trade Commission is currently investigating through their Bureau of Competition.

Since there are only four major generic pharmaceutical manufacturers in the United States, a nice tidy sum of 200 million to each guaranteed that no generic form of Modafinil would be seen on the market for the next 6 years.

After blocking the generics, Cephalon then used another tactic to keep prescription prices high. After stalling through patent violation suits and delaying as long as they could in court, Cephalon began their out of court settlement proceedings in order to enter into an agreement to pay the generic manufacturers to not attempt a US generic version of Provigil.

At this point, Cephalon hikes up the price on Provigil and introduces a new version (Nuvigil) so they can further extend their patent protection on the new version.

The FTC originally filed a suit against Cephalon in 2008 for these practices and since there have been some generic versions. One of the generic pharmaceutical manufacturers in question (Teva) who were in talks about creating a US generic for Provigil have since acquired Cephalon.

Brand name Provigil in the US without insurance can be upwards of $50 for a single 200mg pill.

In fact, the prices for Modafinil are some of the most expensive for any equivalent drug and due to lack of generics (the drug is still under patent from Cephalon, formerly French lab Lafon) the price has remained high for the duration.

Modafinil usage on the rise

Another reason for the price tag is the fact that it’s become a popular designer drug amongst CEO’s, Wall Street traders, web designers and coders and students across the US and Europe.

Today, generic versions are more available, but the significant price savings which generally accompany generic drugs is driven by a competitive market of suppliers. This lower-priced market is still developing at this time.

Some people choose to order Modafinil online from overseas pharmacies, such as those in India or elsewhere. This can occasionally be a risky situation since some Indian or Chinese labs don’t have the same quality assurance and oversight in their labs as we do in the US and Europe.

There is also the issue of counterfeit Modafinil tablets or even tablets sold that contain impurities which could be a health concern.

If you do order from a pharmacy overseas you could also face issues with Customs if you can’t prove that you have a prescription for the drug. There are also many issues where when purchasing from a possibly shady online source nothing was shipped after payment.

If you’re planning on trying to use Modafinil, getting a prescription is the safest means so that you can ensure that the product you’re going to receive is what it is and has been produced under the proper safety conditions.

Price may still be an issue but a bit of expense could be far preferable to a “love letter” from CBP explaining your package has been seized or worse, a shipment of counterfeit pills possibly full of impurities.

Before taking Modafinil (or any other supplement), it’s always best to consult with your personal care practitioner.

This is the case even for someone in good health, but especially important if you are currently under a doctor’s care or taking any prescription or over-the-counter drugs for any existing condition.

Modafinil is Available for Purchase in Australia in 2021

Buying Modafinil in China: What You Should Know in 2021

Where To Buy Modafinil Online in 2021

The 4 Best Modafinil Alternatives in 2021

Modafinil 200 mg 30 tablets (30 day supply) is 132 dollars on Blink health and about $90 at Randalls, Safeway or Kroger with the GoodRx coupon. Hope this helps. I bought mine at Randalls

used modafinil 200mg and had to pay w/o help from insurance the cheapest was castco 469.23,this is crazy but when you need it you need it.

Sorry to hear that, Christine. How much did you buy? That seems like a very high price.

FYI you can get cheap, high quality Modafinil from Duckdose and AfinilExpress.

I reviewed each company:

I was just prescribed to take 200mg pills of modafinil by my doctor. He advised me to call various pharmacies due to the variation of prices. Without insurance coverage at Costco. Non generic was $1500 for 30 200mg pills and the generic was $35.00 for 30 200mg pills (this is the lowest price I have ever seen or heard of) I’m waiting to see how much it will cost with my insurance. I am still waiting on authorization from my insurance company. I just filled the prescription today. I live in Maryland and the Costco located is in Beltsville MD.

i can send you non generic in 100 USD Modalert modafinil 200 mg.

Having heard all of the horror stories of what was being charged for Modafinil, I purchased online for almost 5 years. Then, I ended up with a prescription. A friend of mine with considerable monthly medical bills had informed me of a drastic difference in price at Costco. Of course, such a news demands validation, so off I went.

Sure enough, Just over $60 for 60 200mg pills of Modafinil. Mfg : Alembic Pharmaceuticals.

For clarity, that worked out to be $1.00 per pill. No Insurance! Though there are no state taxes here in Oregon, the Costco Pharmacy does charge something close to a $6.00 filling fee so that is why it was not exactly $60.00

This savings, alone, justifies the “club membership” fee one has to pay for the right to be a customer.

The stuff I was ordering from overseas was produced by HAB Pharmaceuticals and I can’t tell the difference. Both, Alembic and HAB are in India.

I hope this offers clarity to anyone seeking such data.

Send me a weeks worth I need to test them out email me jkyle503@outlook.com