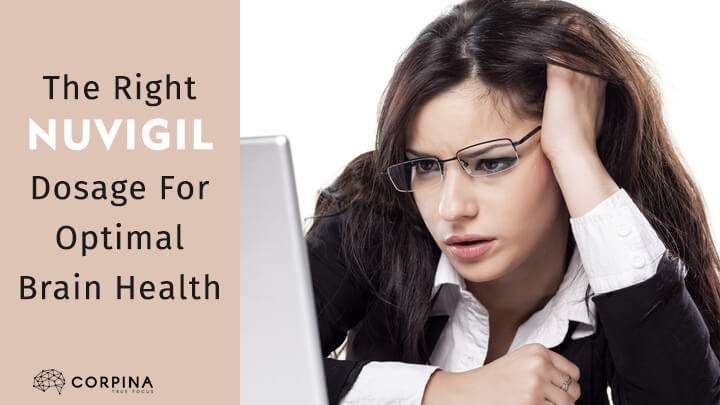 What is the best Nuvigil dosage?

There could be many reasons why. Perhaps you didn’t sleep well last night, or perhaps you just forgot your morning cup of joe.

Or perhaps you’re suffering from one of hundreds of known sleep disorders.

Among the list of sleep disorders, there are about 100 different conditions that can cause sleepiness, sleeplessness, and abnormal or disturbed sleep.

A variety of medical, surgical, physical and behavioral treatments are available for these conditions, but there is growing recognition that certain medications and efforts to maintain a pattern of normal wakefulness during the day (while getting consistent and restful sleep at night) are particularly effective for disturbed sleep and resultant sleepiness.

Nuvigil is used to treat sleep disorders also help in concentration and the maintenance of attention, and may also be useful for depression and some other psychiatric disorders.

Nuvigil, commonly referred to as Armodafinil, is a white crystalline substance slightly soluble in water. It is used as a medicine to reduce extreme sleepiness brought by renowned sleep disorders.

Such include narcolepsy which is a neurological disorder where the patient experiences excessive sleepiness during the day and uncontrolled periods of dozing off.

This can be quite dangerous considering the sleep attacks can take place at any time during any activity. Nuvigil can also be used as a remedy for obstructive sleep apnea which is asleep disorder characterized by regular pauses in breathing when one is asleep.

This is due to blockage of the upper airway during sleep. The victim may not notice but a bystander or the victim’s ‘bed-partner’ can become aware of this situation. It is normally accompanied by snoring.

Nuvigil has been approved by the Food and Drug Administration to treat various disorders.

The drug was also tested on adult schizophrenics and although the experiment did not go through, it was noted later that the patients had shown lesser negative symptoms of schizophrenia.

If you are taking Nuvigil to treat narcolepsy or OSAHS, you will probably take it in the morning.

If you are taking Nuvigil to treat shift work sleep disorder, you will probably take it 1 hour before the beginning of your work shift.

Nuvigil comes as a 150mg tablet to take by mouth. It is usually taken once a day with or without food.

I personally take 37.mg in the morning with coffee or tea and leave it at that (I take this brand of Nuvigil). Further, I cap it to 3 days per week use.

If you feel a slight tolerance to Nuvigil starting to build, then you can up the dose to 37.5mg twice a day (once in the morning and once around lunch), or even 75mg twice a day if necessary.

I recommend taking Nuvigil around the same time every day, so you’re able to be more aware of how it affects your mood.

Do not change the time of day that you take Nuvigil without talking to your doctor. Talk to your doctor if your work shift does not begin at the same time every day.

Follow the directions on your prescription label carefully, and ask your doctor or pharmacist to explain any part you do not understand. Take Nuvigil exactly as directed.

Most common side effects from Nuvigil

Nuvigil is a strong drug and like any other drug the dosage should be done as the doctor ordered.

If you happen to miss a dose, take it as soon as you realize and if it’s too late, skip it but make sure that you don’t take two pills at once.

Until now, it is not known how the drug works, but it is said to affect the part of the brain responsible for the wake/sleep cycle. Nevertheless, Nuvigil doesn’t change your sleep patterns (so long as it wears off before bed).

The most common side effect is dehydration and headache.

Because Armodafinil suppresses your appetite, it’s easy to work or study for hours on end without breaks. Drink plenty of water (as you normally would) and you’ll avoid the common pressure headache.

If you do happen to get the headache, take a break, grab a quick drink, and let your mind settle. After 5-10 minutes it should subside and you’ll be back in action.

Precautions to take before using Nuvigil

Before taking Nuvigil, there are some precautions one has to take to prevent following side effects.

First off, you should inform your doctor if you are allergic to any substances that might be present in the drug. If you have a medical history relating to high blood pressure and or heart problems, consult your doctor to advise you on what medicine to take.

Also, if you’ve had a rash after using Nuvigil (or other ‘Afinils), avoid taking the drug again until your doctor gives the okay.

Pregnant women, soon-to-be pregnant women, and lactating mothers should not take this drug, as it may interfere with pregnancy (current research is ongoing, but better to be safe).

As you might guess, if you’ve had a relative with a medical history of mental or mood problems, suicidal thoughts or alcohol or substance abuse, the drug may not be the best for you.

As with most nootropics, start with a small dose of and increase gradually over time. Again, I take only 37.5 mg in the morning, 2-3 times a week.

Whatever you do, stay hydrated, stay healthy, and keep nooting!

How Much Does Nuvigil Cost To Take Regularly?

Nuvigil: How It Works and Where to Buy It

Nuvigil vs other products

Nuvigil can be hard to get without a prescription so I like to use both Adrafanil and Hydrafanil. They seem to really help with focus and are less intense. I think that might be a good place to start before talking to your doctor about Nuvigil. This is just my advice though.

Hey Collin good point, although you could just buy a generic version of Nuvigil from ModafinilCat or Duckdose. Of course, there is a very small risk, so buy with discretion.

I’ve reviewed both vendors on Corpina:

[…] a starter, a small dose of around 50mg (or 37.5mg for Armodafinil/Nuvigil) will be enough to help you achieve the desired result and reduce the likelihood of getting side […]