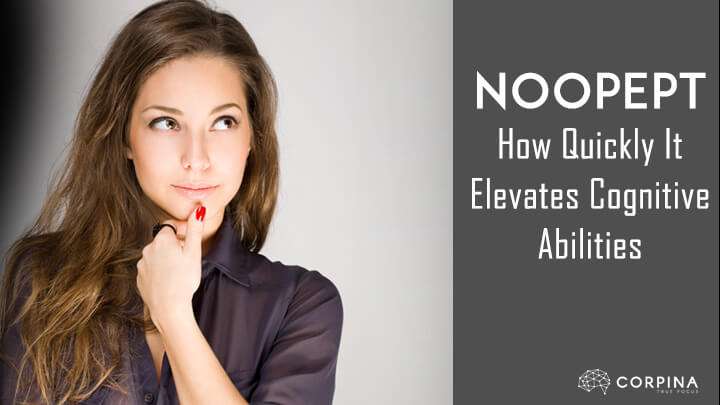 Noopept is a fantastic addition to the world of Nootropics. It holds promise for both the short and even long-term improvements in memory, learning ability, and attention span.

Further, it holds great potential for the treatment of degenerative cognitive diseases such as Alzheimer’s disease and perhaps even some types of mental disorders.

As with any supplement, there are always concerns and questions. While Noopept is known to be very safe with very low toxicity to humans, some people may be more sensitive to these compounds.

It has been found to improve memory, learning ability, focus, and concentration. Here is a look at Noopept and how long it takes to work.

Noopept is a chemical peptide compound that moves to the sites of glutamate receptors in specific areas of the brain. It binds to such sites and helps to inhibit the glutamate decomposition which is one of the most powerful neurotransmitters compared to cognitive function. Noopept stimulates these receptors to be more sensitive to glutamate so that they are enabled more easily.

The glutamatergic system is considered extremely important in the formation of memory, learning and other cognitive processes we generally associated with increased intelligence.

Why should you use Noopept?

Most people use Noopept to increase their brain power and experience of cognitive enhancement. Undoubtedly, some users and studies have shown that this can be very effective to improve memory and learning abilities.

Noopept is one of few nootropics that increases neuroplasticity (your brain’s ability to “rewire” itself). Some studies show that Noopept may help you grow new brain cells. Thanks to these effects, it can help boost your creativity and ability to perform creative work.

Analogically, it can be compared to the lifting of a type of brain fog. It becomes clearer when supplementing with Noopept. Attention span is improved with a higher concentration and focus.

In this regard, many users are also able to see improvements in their stress and anxiety levels. Regularly taking Noopept can increase your productivity, motivation and training.

The supplement is also necessary for supporting overall brain health. Noopept is actually considered a neuroprotective, meaning it can help protect neurons in the brain against damage.

Noopept absorbs inside the gastrointestinal tract where it then travels to the brain and across the blood-brain barrier easily.

The full effects kick in fast. In just about 15 to 20 minutes you’ll feel sharper and clearer, making Noopept one of the fastest acting nootropic supplements available.

How much should you take?

Here’s my nootropic dosing rule of thumb: take small amounts and gradually increase the dosage and frequency. This means that you should start with as little as 5 mg two or three times a day, once or twice a week.

Some people eventually increase the dose up to 40 mg powder Noopept per day (every day), but it’s better to stick with 10 – 30 mg daily. Anything more than that will give you a pressure headache and have diminishing returns.

The reason for the spread of this dosage is because Noopept has a short half life, and regular administration maintains an optimal “dose” within your body.

To take Noopept, just mix the powder in a glass of water and chug. Or, put the powder under your tongue, let it sit, and then take a sip of water.

Your diet and whatever you’ve eaten before your dose may have a big impact on how quickly Noopept starts to work. Most of Noopept’s nootropic effects result from its metabolites.

Because Noopept’s metabolites are responsible for its action, rapid metabolism of both the initial dose and the subsequent metabolites will cause huge swings in the supplement’s effectiveness.

Noopept reaches its maximum concentration in rat brains after a mere seven (!) minutes, and has a half-life of around 16 minutes—once again, this is in rats.

Rats tend to process Noopept faster than humans do, with most research finding that the time values for humans are about twice as long as for rats when taken on an empty stomach.

This means that you’ll be looking at about 15 minutes from ingestion time to reach peak Noopept in your brain, though you likely won’t notice anything until roughly 15 minutes later when much of the Noopept has been converted into its bioactive metabolites.

Typical pharmaceutical bugbears like grapefruit juice, nutmeg, and alcohol don’t have any known interactions with Noopept’s metabolic breakdown pathway, but steering clear of them is probably a good choice anyway.

Coffee should be okay.

Eating a large or a fatty meal right before your Noopept dose will likely slow the rate of the initial Noopept molecule breakdown and absorption. Eating meals that are heavy in protein may also be inadvisable, but won’t be harmful.

Noopept is a fast-acting nootropic, and you’ll notice it working within 30 minutes if you’re a responder and haven’t eaten a large meal before dosing.

If you eat a large meal, expect to be waiting up to an hour and a half and to have a harder time identifying the cognitive changes.

Users report that Noopept is noticeable on its first day of action, unlike other nootropics.

It’s clear that Noopept is eliminated from the human body relatively quickly, as most users only report effects for a few hours. Despite being eliminated quickly, Noopept is likely a nootropic that you’ll want to stick with for a month or more.

Noopept is confirmed to be safe for up to 56 consecutive days of use, and most of the real benefits that you’ll get from it will come after your first day. The longer you use Noopept, the more its memory-retention enhancing effects will pay off down the line.

While some users take Noopept irregularly, I’m of the opinion that it’s a daily stack addition rather than a one-off during crunch time.

Stacking Noopept with other nootropics

Noopept plays nicely with other nootropics, particular cholines such as Alpha GPC and Citicoline.

Noopept should stack nicely with practically any other nootropic that you can imagine, except the racetams. Noopept isn’t a racetam, but a comparative study found it to be more effective than a large dose of piracetam while causing fewer side effects.

Piracetam offers similar benefits as Noopept, and stacking both of them together is asking for side effects that you don’t need to endure.

Nutritional supplements should play well with Noopept, too. The only caveat here is taking your Noopept at the same time as fish oil or another fatty acid carrier.

The advisory here is due to the high-fat content. You won’t be causing any damage, but you’ll probably be reducing the intensity of your dose.

Give it a try

In conclusion, Noopept is a great all around cognitive enhancer. It raises oxygen levels in the brain, and many users report a sense of clarity, even from the initial stages of using this product.

Given that it has benefits ranging from memory to creativity, has almost no side effects, and is cheap to buy online, Noopept is a great nootropic for beginners and experts alike.

Where’s the best place to buy nooept and the best brand ? Thanks