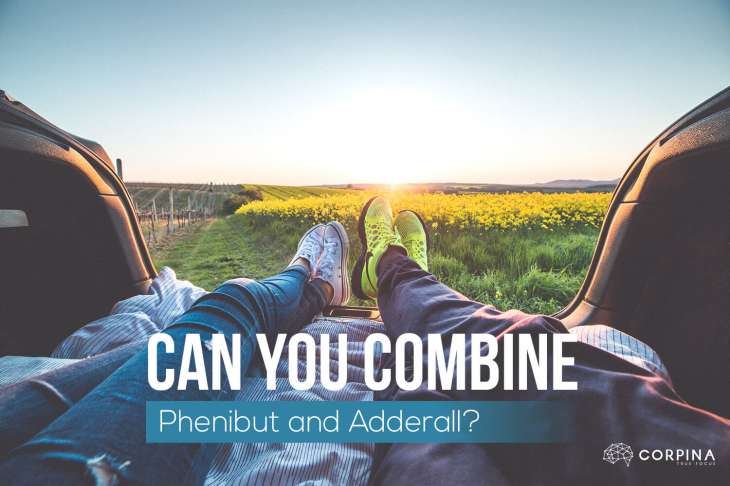 Warning: Phenibut and Adderall are both powerful drugs, and work differently for everyone. The following suggestions are not meant to be medical advice, guidelines, or fact in any form. They are based purely on my own experiences and the experiences of others, which have been reported at length on various online forums.

Like many well-known nootropics, such as the racetams, Phenibut has the characteristics of a stimulant, increasing higher level cognitive functions like memory, attention, and wakefulness.

While the FDA hasn’t approved Phenibut for medicinal use in the United States, it has been used off-label in both the US and Russia since the 1960s.

Phenibut is, however, commercially available to buy as a nutritional supplement in the United States.

While Phenibut clinical studies are few and far in between, it is unofficially used to treat social anxiety, insomnia, stress, fatigue, PTSD, alcoholism, and depression, as well as general cognitive enhancement..

Phenibut mirrors the effects of GABA and other drugs; chief among these is GHB.

It therefore comes as no surprise that Phenibut has also been used as a ‘party drug’ and confidence trick to mimic the effects of GHB, a naturally occurring substance in the central nervous system (and an illegal drug in many countries).

Adderall is an FDA-approved amphetamine that is used to treat attention deficit hyperactivity disorder (ADHD) as well as narcolepsy.

Both Adderall and Phenibut are used extensively off-label for all sorts of reasons, ranging from productivity to partying.

Phenibut with Adderall is often popularly used under the presumption that the combined effect can reduce anxiety.

For many users, taking phenibut after Adderall has had a sedative effect, helping users avoid the anxiety and irritability that comes after taking adderall.

Combination reports are mixed, with some users reporting adverse reactions and others claiming that the phenibut-adderall combo changed their lives. These are covered in detail below.

Studies suggest that Phenibut counters the effects of amphetamines (source: Wiley) resulting in a general brain fog where the benefits of both drugs are negated.

Therefore they should only be used together under medical advice or with cautious trials.

Recommended dosage of Phenibut when taken with Adderall

Since little clinical research has been done that looks at Phenibut’s effects on humans, users are often at a loss when measuring the right amount of phenibut.

The appropriate phenibut dosage depends on several elements such as the age, sex, physical condition, genetic background and environmental stimuli of the user.

These elements influence the potency of phenibut, both alone and in conjunction with other stimulants.

However in general, a recommended program is a 3-day cycle followed by 2 or 3 days of cessation of use.

Based on individual experiences, the ideal dose is roughly 19.5mg per pound of body weight (for men).

Note: this is just a rule of thumb. It would be unwise to treat it as complete fact.

The recommended dosage for Adderall for ADHD in children between 3 and 5 years is 2.5 mg daily initially, which may be incremented by 2.5 mg weekly until positive response.

In children above 6 years, initial dosage is 5 mg twice daily, raised by the same amount weekly until positive response is seen.

For narcolepsy, Adderall dosage is usually divided into daily doses between 5 mg and 60 mg depending on the response of the patient.

The first dose of Adderall is often taken the first thing in the morning after waking. Subsequently, one of two further doses are taken throughout the day, about 4 or 6 hours apart.

Phenibut is usually taken after Adderall.

However both drugs should only be taken after consultation with a medical practitioner.

When combined, Phenibut is usually taken after Adderall for effect. Also, while taking the two together and for maximum effect, the Phenibut cycle should be followed with a few days of cessation between uses.

Because phenibut lacks a solid foundation of scientific evidence to stand on, not enough is known about its safety. Therefore, it is not recommended for pregnant and breastfeeding women.

Also, although it does have recorded effects against anxiety, it is not recommended for prolonged treatment of general anxiety disorder. Phenibut side effects can include withdrawals when discontinued.

While Adderall has been approved by the FDA for use as an amphetamine to treat ADHD, there have been some cases of the drug causing sudden death among adults, children and adolescents with structural cardiac abnormalities.

As a result, the FDA issued a warning in 2005 that patients with heart defects should not be treated with Adderall products (source: FDA).

More recent studies conducted by the FDA on the safety of the drugs used to treat ADHD have not revealed any noteworthy side effects of taking adderall. Further, since it is an amphetamine, there are recommendations against prolonged use of the drug as it can lead to dependence.

At the same time, there have been few studies on the long-term effect of the drug, so physicians are recommended to re-evaluate its long-term effectiveness from time to time.

Benefits of using phenibut and adderall together

The anxiety-free state usually lasts for a full night out, not just for a few hours. While it’s common for Adderall to help combat social anxiety, the Adderall+Phenibut combination has a much greater effectiveness and lessens the chance of Adderall stimulation producing anxiety.

This is profound and life changing for many young adults struggling with social anxiety disorder. Whereas before there were introverted young men and women with a social disconnect, Phenibut and Adderall allows you to be naturally expressive, look forward to social situations, and enjoy associating with others.

The effects help users feel comfortable in their own skin, able to converse normally (even smoothly) to members of the opposite sex, and overcome anxiety associated with intimacy. It’s like the medication turns users into the person they have always wanted to be.

Beyond social situations, Adderall and Phenibut can have profound effects on lifestyle. Users are able to better focus on their goals and essentially “get out of their heads” (rather than overthinking/analyzing/worrying/self-critiquing on Adderall).

It’s quite amazing what such a simple combination can do to help people enjoy life, and look forward to socializing with others.

However, with these benefits come the potential for serious side effects. When taking phenibut with adderall, it’s important to be very delicate with doses and dose increases.

Side effects of taking adderall with phenibut

Because Phenibut is a PEA antagonist, that once you come off (especially quick), the PEA receptors are very sensitized leaving to crippling anxiety. DL-phenylalanine (DLPA) will help restore some of the dopamine activity, as would L-Tyrosine.

What happens when you combine both nootropic drugs is that your body and brain are just in recovery mode and not much will help, outside of a healthy diet and rest.

I’m not sure about long-term phenibut use causing long-term apathy but I do know that it can take a while for those GABA-B receptors to restore themselves. This is always the case when taking phenibut, but it’s compounded with Adderall use.

Most people think of Phenibut as working mainly on GABA and think it’s just relaxing, but what they don’t know much about it’s effects on dopamine.

First time users of phenibut report feelings of extreme euphoria, like they can accomplish anything and are brimming with confidence. This is Phenibut’s dopamine effect in action.

That extreme confidence effect wears off after only about 3 uses. Then it becomes strictly relaxation for awhile. Then after months on and off phenibut it becomes barely stimulating; anxiety/paranoia starts to develop during the comedown.

Stimulants like adderall have a small amount of anxiety that comes simply by taking the  supplement, so Adderall can worsen Phenibut’s comedown.

Withdrawal from both can have more complex side effects than a simple down-regulation of GABA-B and dopamine receptors.

For that reason, it’s wise to have other supplements on hand to manage withdrawal symptoms as they present themselves. These include nootropic supplements that can help restore weakened GABA receptors, such as Bacopa monnieri).

Many people believe that Noopept can “restore” their emotions when they felt indifferent to any number of things. Sulbutiamine is another alternative to increase focus, energy and motivation.

Like Adderall and Phenibut, Noopept has downsides when overused, but there are conflicting reports on this as well. It’s essentially a synthetic version of Vitamin B1.

It’s not like a regular stimulants in that there is no inherent crash involved. It’s more of an alertness/focus nootropic, followed by a subtle come down.

ALCAR has other holistic health benefits for you and your brain: it alleviates depression, moods, motivation & cognition/memory not to mention it has a protective effect on the CNS and can even help your heart functioning.

What I would recommend for anyone taking Adderall and Phenibut together is just give it time. Try to be patient and give your brain a chance to balance itself out gradually.

Taking other brain altering substances can just delay that process. All our brains are different and it’s important to understand how and why each drug affects you.

With patience and measurement, you should see small improvements each day in your mood and the quality of your relationships.

By far one of the best articles I’ve ever read. Thanks for taking the time to round up a bunch of random information and facts on the subject. Your numbers may not work for everyone, but they do a good job of summarizing the random anecdotes and literature on the subject.

Thanks John! Appreciate the kind words. 🙂

I am currently taking Adderall twice daily, a total of 40mg. I can confirm that the Adderall/Phenibut combination is life-changing. I thought the Adderall alone was working beautifully for my ADD, but I had nothing to take for my generalized until now. Even though I can only take this combo once or twice a week, it’s definitely a treat that I look forward to every week now. Thank you so much for the post Dan, I greatly appreciate it. ????

Outstanding article thank you very much. You helped me perfect my dosage and timing very accurately. I do find the combo life changing.