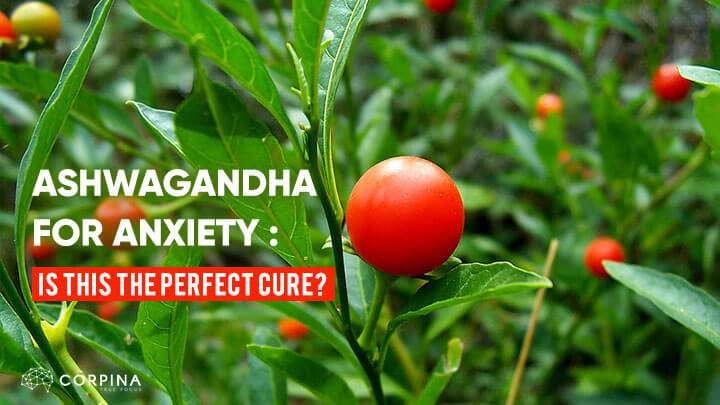 Do you suffer from anxiety? Having some from time to time is natural. When it gets to the point that it is affecting your day to day life, however, you might need to take action to correct it.

There are plenty of effective strategies for coping. Whenever I hear of a new one, I like to try it out and see how it works with me. One that has recently caught on with me is taking Ashwagandha for anxiety.

I won’t say that Ashwagandha cured my anxiety, but there’s reason to believe that it helps with controlling it.

Ashwagandha is a plant used in the Indian practice of Ayurvedic medicine. It is known by many names: Withania Somnifera, Indian Ginseng, and Indian Winter Cherry, among others.

The plant is the most revered in Ayurveda, a system of holistic healing developed in India. Ayurveda practitioners use the root as a narcotic, a stimulant, a diuretic, and even an astringent.

Cancer patients use the plant to reduce the effects of immunosuppression. They also use it to counteract the pain associated with chemotherapy.

It’s a plant with proven medical uses, but how does taking Ashwagandha for anxiety fare?

Ashwagandha is an adaptogen. This means that it has properties that combat the physical and chemical effects of stress in the human body. Specifically, there are two compounds, alkaloids and lactones, believed to contribute to these abilities.

That on its own is a positive sign. Scientific studies, though, further support the idea of using Ashwagandha for anxiety and panic attacks.

One such study examined the effectiveness of the plant on lab rats. Researchers subjected the rats to a range of known stressors, including a forced swimming trial.

Rats that took Ashwagandha before the test had improved times. They also had lower concentrations of stress compounds in their blood. Their conclusion was that Ashwagandha aided in the stress reduction, but is that also applicable to humans?

A second study, An Alternative Treatment For Anxiety, suggests that this is the case. This study carried out trials on humans, monitoring several metrics of stress.

Researchers assessed groups of people taking daily doses of Ashwagandha against a control group taking a placebo for several weeks.

The researchers found that individuals who took Ashwagandha enjoyed greater stress reduction than those who took the placebo.

Though they acknowledged limitations to the study and admitted a need for more research, they concluded that Ashwagandha “appears to alleviate these prevalent conditions in these limited controlled trials.”

The science is there, but how does that translate to the average person who wants to take Ashwagandha for anxiety and depression?

Participants in the study received a 1,000 mg daily dose of Ashwagandha. Lower doses are cost-effective and suitable for treating some conditions. In these cases, a daily dose of 300-500 mg will do. The optimal Ashwagandha dosage for social anxiety, though, is 6,000 mg daily.

When taking Ashwagandha for anxiety, breaking it into three doses of 2,000 mg is most effective. You should time the doses to coincide with meals. If you are taking a single daily dose, do so with breakfast.

There are three main ways to ingest Ashwagandha. It is available in pill form, as a powder, and as a liquid extract. Your choice will be dependent on your preferred method of consumption, but a few stand-outs rate quite highly:

As a capsule, customers praise BRI Nutrition’s “Pure Ashwagandha” for being gelatin free. It comes in 90-capsule bottles, providing a long lasting supply for daily users.

Herb Pharm’s “Ashwagandha Extract” is a tincture. It combines a liquid form of the root in a suspension of alcohol. You can add this liquid to a drink for easy consumption.

For those that prefer powders, Terrasoul Superfoods “Ashwagandha Root Powder” is a certified organic variety. You can mix the powder into foods, or add it to soothing drinks like tea or milk.

Despite its popularity, Ashwagandha is just gaining renown in Western markets. As a result, there are some common questions potential users have about its efficacy:

Is Ashwagandha Dangerous? Studies suggest no toxicity when adhering to standard doses. Data from Examine.com shows that the LD50 of Ashwagandha extract is 465mg/kg in rats and 432mg/kg in mice.

What Are Ashwagandha’s Side Effects? Some studies have shown limited side effects. One report detailed a woman who experienced abnormal hair growth while taking the extract. Another documented an itching and burning of a man’s penis.

There is a possibility that huge doses may reduce blood pressure and sugar levels. It may also irritate ulcers and disrupt thyroid hormone levels. Sticking to recommended dosages should render these effects a non-issue, though.

Ashwagandha may enhance other substances. Sedatives, alcohol, and other anti-anxiety medications will have a more pronounced effect when taken in conjunction with Ashwagandha.

To avoid any potential complications, you should consult your doctor to learn more about possible interactions between Ashwagandha and compounds you are currently taking.

Does Ashwagandha Cause Panic Attacks? There is no data implicating Ashwagandha in panic attacks. Available information suggests that its anxiety-reducing effects may help those who suffer from such attacks.

Should I Take Rhodiola Or Ashwagandha For Anxiety? Both remedies have their proponents. There is some evidence to suggest, however, that Rhodiola’s side effects may increase the effects of anxiety in some individuals.

Anecdotal evidence from individuals who have taken Rhodiola and seen their anxiety worsen also exist. These individuals reported difficulties concentrating, problems sleeping, and a mid-day “crash” that left them devoid of energy.

No remedy is a “cure all” that will handle every problem you are experiencing. Ashwagandha may be right for you, though, if used in conjunction with your other anxiety control strategies.

If you want to learn more about Ashwagandha and incorporate it into your regimen, you should:

Hopefully, this guide served as a good starting point. Do you have any questions? Did I miss any details? If so, make sure to let me know down in the comments.

Never taken that much… but with Ashwaganda, you should be fine at high doses. Just remember your body adapts very quickly to this herb, so don’t expect to be able to maintain that 6g dose with the same effect. Would love to hear how it goes tho — good luck!

I would like to know what evidence you have for stating “body adapts very quickly”. I have read numerous scientific articles on this herb and never read that anywhere. Here is one study
https://www.ncbi.nlm.nih.gov/pmc/articles/PMC3573577/

Yes, but you should be using the raw powder in warm milk not tabs of unknown origin. Also you should be taking b6 and fish oil. At least 6g a day.

Blake, Ashwaganda is a herb, not a drug. Grams are the order of the day not mgs. You should be taking around 6g min, a day of pure powder with warm milk and honey. Note capsules are often “extracts” the problem is you don’t know what they are extracting. Also they love to combine it with Rhodiola which can have the opposite effect on many people. Pure powder has been aryuveda medicine for 3000 years. Also you need to be taking fish oil, B6, magnesium every day and NOT drinking coffee, ever. Coffee is the kiss of death if you suffer from stress or anxiety. You can drink tea until the cows come home as it’s packed with theanine which actually makes you feel better.

There have been numerous proper human studies proving the anti anxiety and anti depression effects of ashwagandha. These were done in Asia. Does that mean they don’t count? I’ve taken it and works very well.

Just one observation. Stay away from capsules and pills. Use the pure powder and take it the ayurveda way. One teaspoon in a 1/3 glass of hot milk with some honey at least 3x a day. Let is sit in the warm milk for at least an hour. No pharmacy purchased extracts or combinations of anything. That’s the same reason we have major problems with super bugs today. Some smart ass always trying to isolate the active ingredient. It works. I’ve been threw the whole lot; lavender, St Johns wort, Kava, passion flower etc etc. All rubbish. This stuff works and not just for depression/anxiety. Overall well being to. Turmeric is also pretty good (take with olive oil and black pepper) but second to ashwagandha imho.