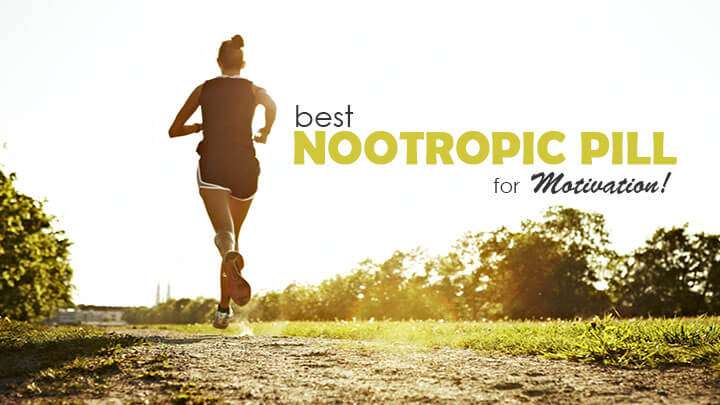 We all start our week with the energy of Usain Bolt and motivation of Soichiro Honda but when it’s Friday evening, we are ready to hit the couch.

Starting a task is often one of the easiest things to do, but actually following it through to completion can feel like climbing Mount Everest deaf, dumb, and blind with one hand and one leg. Whether you’re on a 90-day weight loss program, learning to draw a human face in 15 days, or writing a 40,000-word novel in 30 days, you need energy and motivation to complete your task. Lacking these means you are going to end up choosing the easy option of giving up instead of the ultimate choice of finishing – and winning.

As many wise folks have said, there is no shortcut to success. Why? Because there really isn’t.

However, the one thing they didn’t tell you is, there actually exists a few methods to hack our brain for more energy and motivation. One of these is by taking Nootropics.

Nootropics are science’s best answer to a range of memory, focus, energy and motivation problems.

Aniracetam Vs. Pramiracetam – A Head-to-head battle

Both these drugs belong to the Racetam family, a type of Nootropic that’s been around for decades.

Piracetam, discovered in the early 70’s, is the father of all Racetams, but the newer ones like Aniracetam and Pramiracetam come with a range of new cognitive benefits. Both these drugs work in a somewhat similar fashion, but they do have certain differences. Let’s figure them out.

Our brain has the amazing ability to store loads of data, right from our birth to as many decades as we live, but it is extremely lazy to retrieve what is already stored inside. This is where brain supplements such as Racetams are beneficial.

These drugs boost the metabolism rate in the brain by accelerating oxidative catabolism, which breaks down larger molecules into smaller units to release energy. Also, it improves the cAMP levels (which directly impacts neural functioning in the brain) and ATP-turnover (the chief energy carrier in the brain cells) benefiting various aspects of mental functioning. As a result, users experience a quick spike in their energy levels within minutes.

The active ingredients in Racetams speed up phospholipid metabolism. If you didn’t know, phospholipids are a type of lipids that act as secondary messengers during the process of information transfer. This phenomenon in turn eases the breaking down of proteins in the brain to increase the life of existing cells.

Racetams also increase the release of dopamine and acetylcholine in the hippocampus, the area of the brain that controls long-term memory. This is very important when you’re trying to roll back your memory to recall decade-old events.

However, the effect of racetams in the hippocampus is said to be minimal until it’s paired with a stack that increases the recalling ability of an individual. Studies have shown that racetams impact the cerebral part more efficiently than the hippocampus. So, these drugs work extremely well with a stack.

Better communication between the two hemispheres

Numerous studies point out that racetams energize corpus callosum, the part of the brain that lies between the right and left hemispheres, which helps users to think out-of-the-box.

When You Need Motivation And Energy

If you’re on a sales job, you probably know the challenges of staying motivated when you’re shown the door as many times as Will Smith in The Pursuit of Happyness. You get tired, exhausted, demotivated, and stressed out.

That’s when the thought of ‘giving up’ swims in your mind. What you need during such draining situations is a brain supplement that stimulates dopamine (the neurotransmitter that regulates motivation).

Aniracetam is a powerful tool that makes a clock-watcher into a productive ninja. It wake up the sleeping neurons to amplify your memory and cognitive functioning and keeps you in total control of a range of brain-related activities. It’s also a great mood enhancer that keeps depression and stress-related problems at bay.

By acting on the stress hormones, Aniracetam makes anxiety disorder a no real threat for most users. The unique aspect of this drug is that it supplies the brain with anxiolytic, an essential anti-oxidant that dramatically slows down the aging of healthy brain cells. The half-life of Aniracetam is about 4-5 hours, so you could take 2 or 3 dosages every day.

To sum it up, Aniracetam is one of the best nootropics for memory, anxiety, energy, mood, and cognitive fluency.

Pramiracetam shares a few similarities with Aniracetam. Both are fat-soluble supplements, much different from the other brain supplements that are water-soluble. Both these racetams help elevate the memory and focus to a great level.

However, the effects differ in certain ways. For example, the potency of Pramiracetam is 10 times more than Aniracetam and almost 30 times more than Piracetam. In terms of cognitive fluency and motivation, there are very few brain supplements that can match up with this drug. By working on certain neurons in the thinking areas of the brain, this supplement makes you think better and solve problems faster.

On the whole, Pramiracetam is a great nootropic for memory, focus, energy, and motivation.

Both these racetams are good in their own ways. You can’t go wrong when choosing between the two for memory, focus, energy, and motivation. However, the degree of impact largely depends on the user’s age, sex, and health condition.

Aniracetam could be a great choice if you are looking to get started with Racetams. On the other hand, in case you prefer something more powerful, Pramiracetam could be a better choice. My word of advice is, try them at least for a couple of weeks to know what works best for your body and mind. When you do, please feel free to share your experience with us.

[…] actually doing something about them and taking the steps necessary to improve. Use the feedback as motivation in your […]

[…] however, that Pramiracetam does not is that Aniracetam provides an anti-oxidant that keeps healthy brain cells from aging. This is a benefit to overall health and cognitive […]