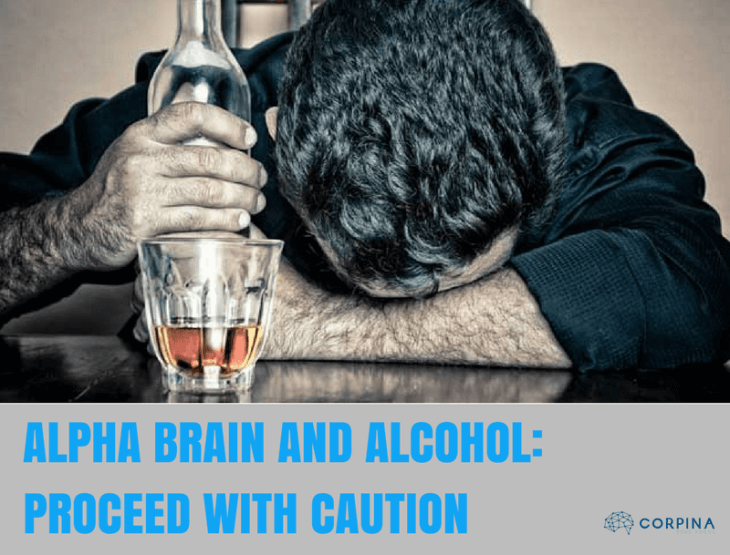 Every once in a while, my brain just doesn’t want to kick into gear.

I’ll sit at my desk and struggle to get anything done. The worst is when one of these mental off days is paired with a due date for an important assignment.

In the past, I’d load up on coffee and try to power my way through my pile of work. That was before I discovered nootropics like Alpha Brain.

Nootropics, also called smart drugs, are a type of supplement that naturally boost memory, focus, and energy. They act as fuel for the brain and enhance your mental functions.

After taking Alpha Brain for the first time (and being impressed by its powerful benefits), I now take the supplement on a regular basis.

That’s when an important question popped into my mind – “is mixing Alpha Brain and alcohol safe?”

I enjoy a few drinks on Friday night. But Friday is also the day of the week that I most often use Alpha Brain to power through my work.

I wanted to be sure there were no negative effects when mixing Alpha Brain and alcohol.

A Quick Note About Nootropics

According to Evidence-Based Complementary and Alternative Medicine, they specifically target the brain, boosting memory, creativity, alertness, and energy among many other things.

Despite their many benefits, it’s important to remember that nootropics aren’t magic. They won’t give you superpowers. Instead, they simply enhance the mental performance of the skills that you’ve already established.

Furthermore, it’s important to buy nootropics from established companies only. Alpha Brain is one of those companies.

So What Exactly is Alpha Brain?

The nootropic known as Alpha Brain is one of Joe Rogan’s favorite supplements.

In addition to the popularity garnered from Rogan’s hit podcast, Alpha Brain is also the first choice for countless students, business professionals, entrepreneurs, and athletes to get the superior mental focus and clarity that they demand.

The reputable nootropic manufacturer Onnit Labs is the mastermind behind Alpha Brain. Since the supplement’s release just a few short years ago, it’s taken the nootropic world by storm.

According to a study in the Journal of the International Society of Sports Nutrition, those taking Alpha Brain have remarkably faster learning retention and recall rate as well as more focus during complex tasks.

Best of all, Alpha Brain is 100% natural. The FDA classifies all of its ingredients as safe.

Alpha Brain can be bought online at Onnit.com/AlphaBrain or purchased in select stores (Onnit store locator).

When considering how Alpha Brain and alcohol might interact with each other, one of the first things to look at is the ingredients in the supplement.

The ingredients Alpha Brain is made up of are:

A quick glance and all these ingredients check out as far as alcohol is concerned. On their own, none of them should cause any problems.

However, sometimes ingredients react strangely when paired together with others in a nootropic stack. That’s why I wasn’t finished with my research just yet.

Unfortunately, it was quite difficult to track down information related to Alpha Brain and alcohol from a reliable resource online.

While not reliable resources in the traditional sense, most review websites consider it safe to consume alcohol with Alpha Brain. They state you shouldn’t experience any problems as long as you drink in moderation.

Strangely, users on Reddit have a slightly different option. Users on a Reddit thread titled “Onnit Alpha Brain is reducing my alcohol cravings” state that since consuming alcohol, their desire to drink alcohol is reduced.

The original poster describes a glass of wine after taking Alpha Brain for two days as:

“Not only did it taste less desirable than usual, but it was dis-associative and slightly uncomfortable.”

Other users seem to agree that Alpha Brain makes alcohol far less desirable. One user claims that this is true of nootropics in general.

What I’m trying to say is that there is no scientific research into Alpha Brain and alcohol and online opinions seem to differ slightly.

Alpha Brain for a Hangover

During my research into the effects of Alpha Brain and alcohol combined, I came across several online articles claiming Alpha Brain as a hangover remedy.

One of these articles was on the Xbrain blog.

In addition to commonplace hangover tips like drinking moderately, not drinking on an empty stomach, avoiding sugary drinks, and drinking lots of water, the article suggests taking Alpha Brain the day after heaving drinking to restore your mental faculties.

Alpha Brain also has the potential to aid in normal hangover recovery. In particular, the ingredient Alpha GPC helps replenish depleted stores of the neurotransmitter responsible for short-term memory, focus, and concentration.

Of course, taking Alpha Brain to help a hangover shouldn’t become commonplace. Don’t do it each time you have a hangover. Instead, save it for those times when you have something important you need to get done despite drinking too much the night before.

To complete my research, I mixed Alpha Brain and alcohol myself.

After taking a single capsule in the morning, I had two drinks that evening. The experience was similar to those of users on Reddit. I experienced no negative effects other than lack of desire to drink more than one or two drinks.

I’ve yet to personally experiment with Alpha Brain after a hangover. I’ll be sure to update you if I do.

My advice to you is this:

mixing Alpha Brain and alcohol did nothing for me