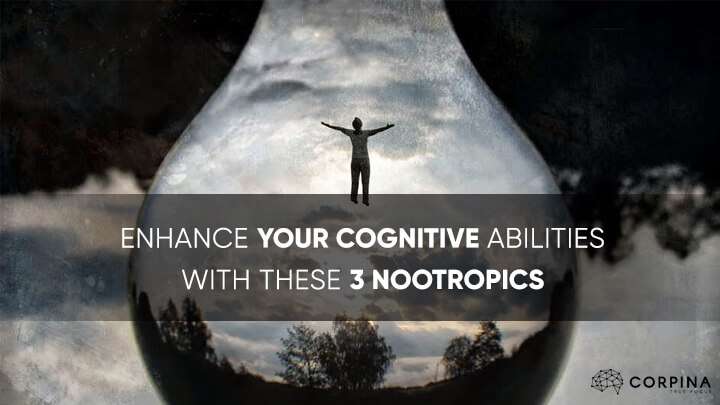 But many nootropics can also work more generally by increasing mental energy, which in turn optimizes all aspects of physical and cognitive performance.

What Is Mental Energy?

Mental energy is a very old concept that has only recently been understood in quantifiable scientific terms.

As long ago as the 4th century Aristotle referred to mental energy as potentiality, and early psychoanalysts including Sigmund Freud and Carl Jung described it in terms of psychological motivation.

But the concept of mental energy remained largely theoretical until neuroscientific research discovered the link between brain metabolism and cognitive capacity.

Studies done in the 1990s and early 2000s indicate that mental energy is far more than a metaphor or concept, but is in fact a measurable function of brain metabolism.

Noted neuroscientist Harris Lieberman summarized these findings in a 2007 Nutritional Neuroscience review, in which he defined mental energy as “the ability or willingness to engage in cognitive work.”

Mental energy can be effected by a variety of factors that impact brain metabolism, including food, sleep, drugs, stress, and disease states.

The amount of available mental energy has a direct impact on both physical and cognitive performance.

When the brain is operating at less than optimal levels of oxygen uptake and glucose metabolism, the result is fatigue, reduced motivation, and impaired physical and mental capacity.

Studies show that keeping the brain functioning at high levels so that glucose and oxygen absorption are optimized is particularly important for learning and other high level cognitive functions.

This is because the brain uses more glucose and oxygen during challenging mental tasks. Increasing mental energy by improving brain metabolism with interventions such as diet, exercise, and meditation can significantly boost cognitive capabilities.

Most nootropics work by modulating the release and uptake of various neurotransmitters, brain chemicals that carry signals throughout the brain and body.

By stimulating the production of acetylcholine, dopamine, glutamine, epinephrine, and other neurotransmitters, nootropics directly enhance the specific cognitive functions with which these important chemicals are associated.

Nootropics can accomplish this by acting as vasodilators that expand blood vessels and increase blood flow, while others speed up neural activity by modulating the action of chemical receptors in the brain.

Some of the most popular and effective nootropic mental energizers are described below.

The Best Nootropics For Mental Energy

Caffeine and L-Theanine, both of which are components of tea, work together to create a nootropic combination or “stack” that enhances mental energy and provides a calming yet stimulating lift.

Studies in which healthy volunteers took 100 gm of caffeine both with and without the addition of 50 gm of L-theanine showed that while caffeine alone improved alertness, the addition of theanine improved mood, speed and accuracy of performance on cognitively demanding tasks.

How it works: Caffeine is a known neural stimulant that works by blocking the adenosine receptors that cause brain activity to slow down and create feelings of sleepiness.

This action enhances brain energy by keeping neural activity high, but can create feelings of anxiety or nervousness which may adversely effect cognitive and social performance.

L-theanine stimulates the production of Gamma Amino-Butyric Acid or GABA, a calming neurotransmitter that inhibits nervous activity. Taken together, caffeine and theanine are synergistic; the caffeine prevents brain activity from slowing down, and the L-theanine prevents caffeine’s negative side effects without compromising its desired action.

The caffeine / L-theanine stack can be an excellent introduction to nootropics; it’s safe, affordable, and readily available, and the results, sometimes described as a “clean and lucid focus,” are proven.

Corpina Recommendation: to try out the caffeine l-theanine stack, get SmartCaffeine from Natural Stacks or Go Cubes from Nootrobox (my review here). Both products are ultra high quality and seem to work better than similar stacks from other vendors.

Phenylpiracetam, a relatively new member of the racetam family of synthetic nootropics, has significant potential for increasing mental energy.

Developed in Russia in the 1980s, it has been proven to increase stamina and improve tolerance to cold temperatures as well as enhance cognitive capabilities.

Phenylpiracetam was used by Soviet military personnel and astronauts to improve performance under challenging conditions. It was also used by Russian athletes, but has been added to the World Anti-Doping Agency’s list of prohibited stimulants and in 2006 an athlete was banned from the winter Olympics for its use.

Phenylpiracetam is available by prescription in Russia but is not sold as a pharmaceutical elsewhere but can be purchased online via specialized nootropic vendors.

How it works: While its exact mechanism of action isn’t fully understood, phenylpiracetam is believed to enhance cognitive abilities with both direct and indirect action.

It is known to directly modulate the production of crucial cognitive neurotransmitters including acetylcholine, sometimes referred to as “the learning transmitter.”

This action plays a major role in phenylpiracetam’s proven ability to increase cognitive abilities, including memory, learning capacity, and concentration.

Phenylpiracetam has also been shown to have powerful energizing and stimulating effects similar to those of amphetamines or phenethylamine substances such as Adderall.

Like those substances, phenylpiracetam is believed to mimic the action of stimulant neurotransmitters including epinephrine, norepinephrine, and dopamine. This stimulant action increases mental energy and thus indirectly enhances all aspects of brain function.

Though Phenylracetam is generally safe and has few known side effects, it’s worth noting that it is one of the strongest nootropics available and recommended dosages are much lower than those of other racetams.

Adrafinil is a synthetic nootropic that acts increases mental energy by acting as a central nervous system stimulant, preventing fatigue and promoting energy and wakefulness.

It has also been shown to have significant positive cognitive effects, improving mood and memory, enhancing focus and concentration, and even increasing learning capacity.

Developed in France during the 1970s, adrafinil was marketed in Europe under the name Olmifon and prescribed as a treatment for narcolepsy and other sleep disorders that caused excessive daytime sleepiness.

Production of Olmifon stopped in 2011, but adrafinil remains unregulated in the US and Canada and is a popular nootropic that increases both energy and cognitive capacity.

How it works: Adrafinil acts on the adrenergic system, the part of the nervous system that releases adrenaline. While adrafinil’s mechanisms of action are not completely understood, it is believed to replicate the positive effect of an adrenaline release by boosting adrenergic neurotransmitters.

The pharmacological effects of adrafinil are virtually identical to those of Modafinil, a USFDA-approved treatment for wakefulness disorders sold under the brand names Alertec, Modavigil, and Provigil.

It is also believed to positively modulate glutamate receptors, stimulate the release of serotonin, and inhibit the breakdown of dopamine, which enhances neuronal communication, improves memory and focus, and creates better general cognitive function.

Research has shown that increasing overall brain energy is an excellent foundation for improving both cognitive and physical performance.

Many nootropic supplements, including those described above, can provide a substantial mental energy boost.

Each and every nootropic varies in two regards – what it claims to do, and what you’ll experience from it. Most nootropics claim to stimulate you mentally, but there are also nootropic “enhancers”, such a choline. These enhancers may not do a lot by themselves, but they can potentiate the effects of other nootropics. Once your body has adjusted to these brain enhancers you can move on and build other stacks.