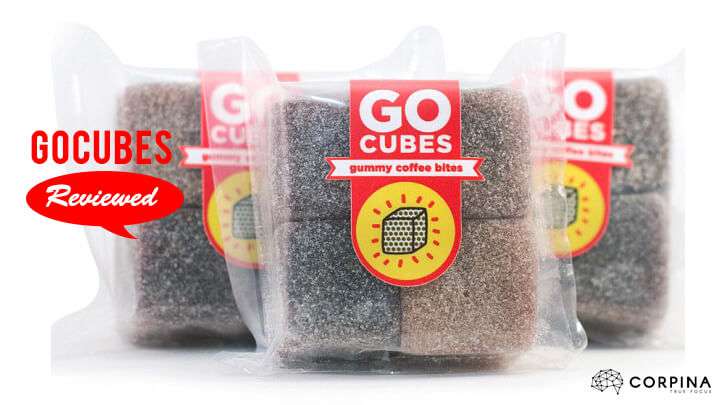 This is our review of Go Cubes®, a caffeinated gum-like nootropic food which takes the form of concentrated coffee along with other ingredients contained within a cube of pectin.

First, we take a look at the nature of the product itself, then we discuss the effects present when taking it. We also cover a bit on Nootrobox, the maker of Go Cubes.

There’s no doubt about it. Coffee is the trusty, go-to stimulating beverage for millions, if not billions of people in the world.

With the fast, demanding world we live in, people rely on the caffeine and micronutrients (such as MAOIs) of coffee to stave off fatigue and depression.

While we love our coffee so dearly, there are a few drawbacks associated with it, such as cost, volume, and jitteriness.

In response, a company by the name of Nootrobox has swooped in the tackle these issues with their own product – Go Cubes.

What are GO CUBES?

Imagine, if you will, taking a cup of black coffee and removing all of the water, leaving only the concentrated solids behind.

Then, take what’s left and suspend it in a tiny cube made of pectin, which is a gelatinous substance derived from certain fruits (such as apples).

Finally, cover the cube in a bit of sugar for taste, and you have this:

Now I assure you that despite their gumdrop-like appearance, Go Cubes are NOT to be treated like candy.

There are some serious ingredients behind them, which give you an upgraded version of the stimulation you’d get from coffee.

Before we go into what it’s like to try GO Cubes, let’s just check out what Nootrobox has put into the formula. Copied from their website, here are the nutrition facts:

Notice, right away, that it’s “Nutrition Facts”, not “Supplement Facts”. The Go Cubes product is treated here as more of a food product than a straight-up nootropic.

This implies that the product is quite safe for human consumption (even according to the FDA).

Most prominently, we have caffeine, which shouldn’t have to be explained too much. It’s the most common stimulant drug in the world, which mainly works by blocking the activation of adenosine receptors (which allow us to feel fatigue).

Benefits include enhanced focus, strength, and being less prone to errors when tired. By itself, it can make a person feel hyperstimulated and jittery in high enough doses. However, this can be mitigated when combined with…

Theanine, which is an amino acid found naturally in many kinds of green and white teas. It relaxes the mind, helping it approach a mild “zen” state with the noticeable increase of alpha brainwaves.

The combination of theanine and caffeine is the basis of many modern nootropic stacks, and is why green tea is both calming and focus-enhancing.

Inositol is a sugar alcohol that contributes a bit to the sweetness of Go Cubes, but it also has antidepressant properties according to one study.

Glucuronolactone is a chemical that is often included in energy supplements, which is claimed to help detoxify the body of other substances produced during metabolism due to its ability to bind to toxins and then leave the body with them.

Finally, we have a few vitamins – B12, B6, and Folate. These three are commonly seen in nootropics because they are required for optimal nerve health and DNA methylation.

Plus, if you happen to be vegetarian or vegan, the extra B12 (which is the cool methyl-B12 version, by the way!) can’t hurt.

Nootrobox also provides a handy graphic which displays the amount of each active ingredient per serving, or two Go Cubes:

Naturally, as the writer of this article, I was very excited to try Go Cubes for myself.

They do look like legitimate cubes of coffee, and I had no doubt that they would taste like coffee, but I wasn’t sure that their mental effects would compare to a real cup of the beverage.

I had a more than a few opportunities to sample the product, as I had ordered the large size box of Go Cubes, with 20 packs of 4 cubes (or two servings) per individual plastic wrapping. Nootrobox also offers a smaller quantity of 6 packs of 4 cubes.

I didn’t realize this until just before I received my package, but there are actually 3 flavors of Go Cubes:

You don’t select which flavors you want at checkout, they come randomly assorted in their packs – which is fine to me because the flavor difference is subtle.

When I finally took delivery of my Go Cubes, I opened my package to find an attention-grabbing red box:

I proceeded to try one of the cubes, because I wasn’t sure how hard the effects would hit even with 50mg of caffeine, as my sensitivity to caffeine has been significantly enhanced by using the Uridine stack in the past.

It hit harder than I thought, actually, with real coffee and energy drinks in the past week to compare to. The taste was of very strong coffee (but not unpleasantly bitter), and the mouth-feel of the pectin cube was very pleasing, as Nootrobox so claims.

It’s like some serious java in the form of a high-quality fruit snack.

The stimulation effect lasted longer than a regular coffee, which surprised me since Nootrobox makes the conservative claim that each cube will last about 4 hours.

I still wonder if the pectin suspension alters the absorption rate of the nutrients in the Go Cube, but the effects seem to kick in more or less as quickly as a coffee beverage.

So far, I’ve only needed to take one cube at a time to get satisfying stimulation. In addition, I am pleased to report that the theanine in the formula works – I get much less nervousness, as well as extra calm focus as I have experienced with other products with both caffeine and theanine, such as NaturalStacks’ SmartCaffeine.

I had my colleague try some of my Go Cubes as well – and she has much more of a tolerance to caffeine than I do, due to years of coffee consumption.

She reported that she needed between 2 Go Cubes and the entire pack of 4 at once to get satisfying levels of caffeination, but also reported a long duration of life, 5.5 to 6 hours versus about 4 for a drink of coffee.

The cost per Go Cube works out to about 50 cents a cube, or a dollar per suggested serving.

This is certainly much cheaper than buying a coffee from a chain cafe on a daily basis, so GO Cubes may be a great cost-saving option for coffee addicts out there.

Overall, I was quite impressed by both the taste and the performance of Go Cubes, and I would certainly buy them again.

My colleague and I both loved the form factor, and found them to be both long-lasting and lacking the full edge of coffee, with theanine and other nootropics added.

They served well for boosting concentration at work, and throughout daily tasks.

Plus, there’s the added perk of keeping the box at my bedside and immediately caffeinating upon waking up. 😉

Nootrobox is a relatively new player in the game of nootropic sales and marketing. The company was founded in 2014 by Michael Brandt and Geoffrey Woo in the San Francisco Bay area.