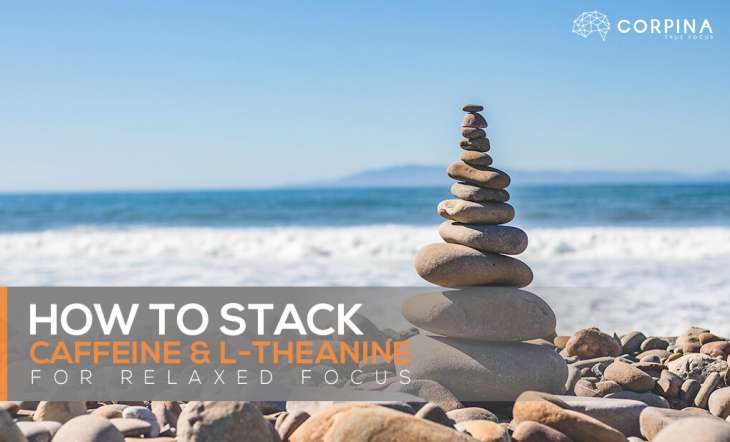 Stacking is a popular method of getting different cognitive enhancers to work together.

Often, the purpose of a stack combination is to attain nootropic synergy, which is the combination of multiple substances with similar effects to amplify each other’s benefits.

Alternatively, people may combine ingredients in a stack to achieve balance, so that one component alleviates consequences of another.

The caffeine-theanine stack uses elements of both types of stacking to create one of the most powerful and enjoyable nootropic combinations available.

What is the Caffeine-Theanine Stack?

As the name suggests, this stack is a duo consisting of the nootropic substances caffeine and theanine.

Caffeine is a stimulant drug that is famous for being the most widely-used psychoactive substance in human history – being naturally present in a variety of food and herbal sources.

It acts through several neurotransmitter systems, chiefly by blocking the activation of adenosine receptors that create the sensation of fatigue.

Some people debate whether caffeine can be considered a true nootropic, although we believe it is, and so do many other nootropics users.

On the flip-side, theanine is a chemical that can be thought of as relaxing or soothing to the mind. It is commonly found in tea, especially of the green and black varieties.

Despite its calming properties, theanine is not a sedative, at least at non-megadose quantities. (But perhaps it’d be useful for the purpose if it was intended).

Theanine works by increasing GABA levels in the brain, as well as serotonin and dopamine to a lesser extent.

How Does the Caffeine-Theanine Stack Work?

When combined, the two ingredients of the stack create a legendary balance that we recommend to nearly everybody.

You essentially gain the benefits of both substances while tossing out the effects that may be undesirable.

Caffeine can be over-stimulating to many people, especially when taken in high doses. While we still consider it to be a nootropic, this is a significant side effect that can make it not ideal to take alone.

According to recent research, the adverse effects of caffeine include anxiety and restlessness, which can detract from the enjoy-ability of its cognitive stimulation.

On the other hand, theanine isn’t a perfect nootropic on its own either, because being calm is only one part of effective thinking and reflection.

Taken together, caffeine and theanine produce a stimulating effect including a loss of fatigue and also a feeling of calmness that adeptly counteracts the “sharp edge” of the caffeine itself.

No longer a double-edged sword, the caffeine has been neutralized and made to work wholly for a clean, zen-like energy boost.

Green tea is one of the most popular beverages in the world, especially in the Far East in countries like China and Japan.

The drink is well-known for providing clean energy and calm concentration, and is often seen as highly beneficial to health.

If you break down the chemical components of green tea leaves, you will find about a 2:1 ratio of theanine to caffeine, respectively.

The effects of green tea come largely from the same synergy seen in the Caffeine-Theanine stack, and the ratio seen in the leaves gives us an excellent basis for dosing.

There are a few teas that have very high l-theanine content. There is one type of green tea that embodies this stack: gyokuro yamashiro. The cultivation process is unique, allowing for the high levels of theanine:

Though it is categorized as a type of sencha according to production methods, gyokuro cultivation differs from other sencha teas. Gyokuro tea leaves are shielded from the sun for at least two weeks before being harvested. This causes both the amino acid theanine and the alkaloid caffeine in the tea leaves to increase, which yields a sweet flavor.

Wikipedia describes gyokuro as expensive and high-end. While the quality is such, that is simply not true! Gyokuro can be purchased from most major tea distributors such as David’s Tea.

I prefer to buy my gyokuro from Yunomi, a family-owned Japanese tea shop.

As seen in the natural contents of green tea, the amounts of each stack ingredient work well in a 2:1 ratio of theanine to caffeine.

Since one cup of green tea may not be strong enough for some people (or they may not enjoy tea), pure ingredients can be combined to create a pill based stack.

For higher strength, some people may prefer a higher dosage of caffeine, closer to the amounts found in energy drinks. In this case, the amounts would be 80-100mg of caffeine with 160—200mg of theanine.

Sticking to the ratio is a good way to preserve the effects of the stack with different dosages, so long as you don’t dose too low or too high.

Experimentation can be key to success with any nootropic.

The caffeine-theanine stack can be made at home using your own ingredients or individual supplements.

Caffeine can be purchased in pill form at pharmacies and convenience stores, commonly in 100mg or 200mg doses. Online, caffeine can be found as a bulk powder in either natural or “anhydrous” form.

Buying in bulk is cheaper and easier to fine-tune dosage with, especially if you use a milligram scale to measure.

Theanine is a bit harder to find than caffeine, because it can be rare to find in stores besides specialized health and supplement shops.

However like caffeine, it can be purchased as a bulk powder which can be measured precisely.

The caffeine-theanine stack itself can be found as a product! Recently, Natural Stacks introduced an item called “Smart Caffeine” which contains 100mg of caffeine and 200mg of theanine, employing the classic ratio.

Where this stack falls short

The caffeine + l-theanine stack has a few downsides.

Firstly, l-theanine is an adaptogen (much more so than caffeine), meaning your body will adjust to the relaxation effect, and eventually you’ll just feel the caffeine. Ideally, the effects of both supplements would wear off at about the same amount of use. But this isn’t the case.

Second, the stack lacks any other support for caffeine balance. Caffeine depletes a long list of vitamins and minerals, such as Vitamin C, B-complex vitamins, magnesium, calcium, potassium, and others.

A truly “smart” caffeine stack would include vitamin and mineral support to balance out the effects of caffeine.

Among all of the effective nootropic stacks that have been discovered, the caffeine/theanine combination has an unrivaled balance that promotes focus and energy without inducing anxiety.

It also synergizes the neurotransmitter production of both substances, leading to substantial nootropic effects.  Everyone should try this stack at least once in their lives!

For an in-depth discussion of the synergistic benefits of caffeine and l-theanine, check out this Longecity thread. Note: multiple users of the stack point out how important it is to find the right ratio.

If you have too much caffeine or theanine, you may feel over-stimulated or slightly drowsy.

[…] For centuries, Matcha green tea has been used by Japanese Zen Buddhist and Chinese Daoists for relaxation and meditation. It provides a higher state of consciousness because of the presences of amino acid L-Theanine which creates alpha waves in the brain. This stimulates relaxation without causing drowsiness. […]

[…] optimal range of theanine-caffeine ratio however is about 2:1 (theanine to caffeine) whereas, even in shadegrown Matcha (which contains some […]

[…] Don’t lash back with anger and bitterness. Breathe in. Breathe out. Stay calm and evaluate the situation. Remaining calm and composed isn’t an act of submission. It means you […]

Does anyone else mix l theanine with coffee? If so would you buy a coffee already mixed with it?

There are quite a few people that prefer to get their caffeine from coffee instead of pill or powder. Mixing l-theanine with the morning cup of joe is a perfect way to start the day. Check out our take on this combo.