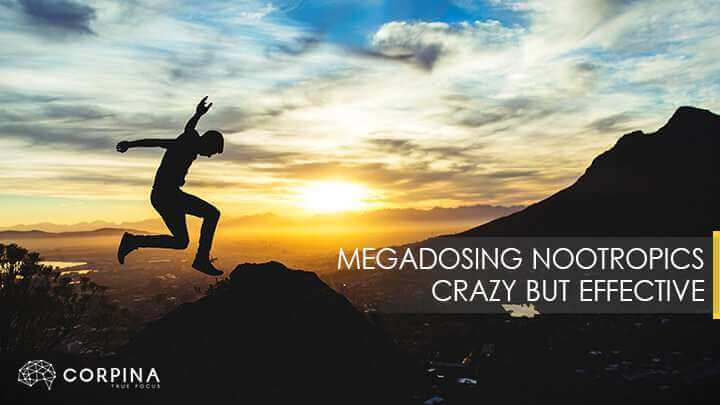 Admittedly, some of us nootropics-takers like to go overboard from time to time.

We like to test the potential of high doses of a substance, whether to achieve a stronger effect or possibly find hidden properties that aren’t found at the recommended dose.

The concept of dosing at an amount that is more than normal is commonly referred to as “megadosing“, and it is usually an experimental procedure.

It must be stressed that anyone who does this (or takes nootropics in general) should have solid background knowledge on whichever substance they’re working with and a good base in biochemistry.

Megadosing is both risky and informative, and certain people find that it works well long term.

There are many reasons why people may deem megadosing as not just preferable, but necessary.

In order to achieve nootropic effects with substances in some individuals, far more than a typical dose is required. A classic example is with piracetam, which has significant variance between effects in its users. It is not uncommon to see a typical dose (around a gram) do nothing for somebody, and they need double or even triple the normal amount to notice anything happen.

This is due to individual body chemistry or occasionally, a display of rapid drug tolerance. The other case is that a typical dosage only yields weak effects, that don’t live up to the claims of people that are possibly more sensitive.

Besides issues with the actual amount of drug in one’s system, mega dosing can provide benefits by extending the efficacy or variety of effects nootropics can have.

When taken in higher doses, previously unobserved properties can be seen. One example of this is phenylpiracetam, which tends to be stimulating at a higher dosage. It can also slightly enhance muscle strength, which is rumored to have to do with brain to peripheral connection. For this reason, it is on the list of banned substances in The Olympics.

Some substances even bear the completely opposite properties when taken in higher doses!  Picamilon, a synthetic combination of GABA and niacin, is normally indicated for relaxation purposes.

However, when the normal dose is exceeded, the niacin promotes blood flow in the brain and produces stimulation, albeit short-lived.

Of course, when you go past the established “limits” of nootropic dosages, there are possible downsides. Most substances labeled as nootropics are extremely safe even at excessive amounts. However, you do risk losing the low side effect profile that is also associated with most nootropics.

A uplifted focus could be replaced by a mild to moderate headache, or an “in the zone” sensation could instead be debilitating brain fog. To avoid this discomfort, it might be worth trying to slowly increase dosage to assess your body’s reaction to the megadosing, rather than force tons of a foreign substance in at once.

Another potential worry is long term effects, although this is quite subjective. Most of the time, the concern is quickly developing a tolerance due to regulation in the neurotransmitter systems. Potentially, megadosing can also deplete some of your body’s resources (such as acetylcholine), but this is usually remedied by supplementation and balanced eating.

Is it Worth It?

Despite the problems associated with megadosing, some careful moderation and execution can make it a very worthwhile endeavor. Naturally, one might have to consider tradeoffs in the case of adverse effects, but usually the greater good can be achieved.

One of the most common substances used in excess is piracetam, which is known to have less potency than other racetams. Many people claim that the typical dosage is between 1 gram and 2.4 grams.

However, many users have tried much higher amounts to realize less subtle effects. I have personally seen accounts of piracetam users going as high as 16 grams!

Fish oil is another example of something that people often take a lot of. Doctors recommend an upper limit of a few grams of that, but some nootropics users defiantly take doses such as 4 grams multiple times a day!

It is believed that the fish oil provides nutrients that nootropic regimens use up rapidly, so many hardcore fanatics feel that they need extra.

Is megadosing unreasonable? Perhaps, but given how safe nootropics truly are, it might be something worth trying for some.

Although the thought of going over a standard dose seems scary, it can be done safely with enough knowledge and patience to experiment.

[…] you might experience a reaction that is opposite to your normal reaction. Some people say that your muscles are stronger when you take a dosage of Phenylpiracetam that’s closer to the maximum recommended […]

I read a lot about nootropics,NGF,BDNF, becouse one family member has lateral amyotrophic sclerosis.The treatement he has does not help.I want to know if nootropics, NGF,BDNF will help?, What do you suggest?
do they work on periferal nervs,or only on the brain?.
Thank you,have a blessed day,Stefan.