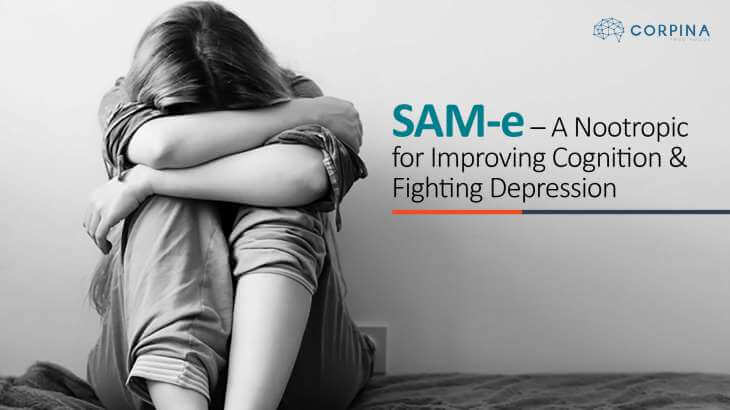 Many people take supplements in the hope that they can improve aspects of their lives without incurring major side-effects or having to rely on prescriptions.  As many as there are available, only a select few of them rise to the status of “life-changing” or “incredibly powerful”.  One of those rare substances is S-Adenosyl Methionine (abbr. SAM-e), which has been hailed as an effective treatment for many problems and is a favorite among many users of nootropics.

SAM-e is an important cosubstrate in the human body, which means it facilitates enzymatic reactions to produce chemicals that we need to function. Specifically, SAM-e is involved withmethyl group transfers or methylation to produce proteins, neurotransmitters, and other biochemicals.

Since methylation in humans is not always at optimal levels (due to genetics and other factors), SAM-e can have widespread benefits by allowing such reactions to occur at a steady rate.

The mental effects associated with this supplement are derived from its influence in bolstering the production of common monoamines such as dopamine, serotonin, and norepinephrine.

Perhaps the most common reason SAM-e is sought after is for its utility as an antidepressant.  A few studies have concluded that compared to placebo, SAM-e had a significant positive effect on treating mild to moderate depressive symptoms.  What makes it better than a typical antidepressant is its lack of unpleasant side effects like headaches and sexual dysfunction.

However, you don’t need to be diagnosed with a disorder to truly feel its brilliant effects on mood.  SAM-e can be taken by almost anyone and it can be mood-lifting, thanks to the role of methylation in increasing and maintaining dopamine and serotonin levels.  Those who do not benefit from SAM-e might already be methylating at a high level, or even too much.  Overall, it seems to be gathering steam as a potential treatment for depression, one that we could see in the very near future.

There is promise for using SAM-e as a treatment for osteoarthritis, due to its ability to assist the regrowth of cartilage in joints.  It can also generally help the regulation of inflammation and pain throughout the body, assisting with conditions such as fibromyalgia.

Besides all of this, SAM-e could be useful in treating liver disease due to its ability to process and recycle chemicals (many of them being harmful) through methylation.  SAM-e is metabolized to several different substance including cysteine and glutathione – both of which are critical to liver function.

SAM-e can be a very effective nootropic, especially when used in combination with other ones.  The primary reason being, of course, an increase in neurotransmitter production.  Increased neurotransmitters levels such as with acetylcholine, norepinephrine, and dopamine are associated with speed, fluidity, and enhanced focus.

The Perceptiv nutraceutical stack we covered a few months ago combined SAM-e with other supplements such as ALCAR, N-Acetylcysteine, and specific B-vitamins.  The magic of Perceptiv was that every ingredient was extremely synergistic with one another, stopping free radicals and helping to pave healthy neural pathways in the brain.  SAM-e is described as the “pivot”, or the most important member of the stack, according to its creator.

Even though it shows promise in treating a variety of conditions, SAM-e is typically only available as a supplement.  It is usually taken orally via an enteric-coated tablet, but an injectable form with a high bioavailability exists.  Prescriptions for SAM-e can be found in Italy, which is also where most (if not all) SAM-e in the world is produced via a special fermentation process.

Tablets of SAM-e are available in 200mg and 400mg quantities, measuring in terms of pure S-Adenosyl Methionine.  The salt form usually taken is SAM-e Tosylate Disulfate, which is sometimes labelled as the SAM-e itself and can cause confusion on the dosage.  Therefore when you choose a product, look for the number regarding the pure form of SAM-e.  Due to the unstable nature of the molecule (it degrades when exposed to air), tablets are best kept in a foil blister-pack

SAM-e is best taken in the morning on an empty stomach, to ensure maximum absorption.  Another reason to take it earlier in the day is that some people experience wakefulness or insomnia if taken towards nighttime.  The effective dose is anywhere from 200 to 800 milligrams, under normal circumstances.  Some people take more or less, and with higher dosages it is usually split into two separate doses in the day.

Falling under the traditional definition of a nootropic, SAM-e hardly exhibits any adverse effects.  That being said, there are some common and mild ones that may disappear with time.  Stomach upset may occur, especially when beginning to take it.  This is common with other nootropics, especially in the realm of herbs.  Headaches and insomnia are related to altered neurotransmitter levels and might be expected, although this may be a sign that you’re taking an excessively high amount.

I have tried SAM-e myself, with great success.  Currently, it is the only nootropic I take daily with no exception – one 200mg enteric-coated tablet from Jarrow Formulas.

The reason I found out about SAM-e was that I was looking for a supplement not only to help my mood, but assist with persistent daytime sleepiness as well.  Some supplements I had tried in the past for this purpose were ALCAR, rhodiola, and DMAE.  ALCAR was somewhat helpful, but after only a few days I stopped noticing any effect.

Anyway, I ordered the Jarrow SAM-e from Amazon.com, which offered prime shipping and an additional e-coupon for the product, bringing it to about $20 for 60 200mg tablets.  I got them (predictably) two days later, and took one immediately since it was morning.  I was extremely groggy at the time, and honestly went back to lie in bed because of mental fatigue.

Within an hour or so, I noticed that my mood was getting warmer and my energy levels rose.  It was an incredible feeling, as I realized then how happy yet focused I felt.  This was all surprising, because I expected only a subtle effect from the SAM-e, yet this was quite remarkable.  It seems to bring out the positive aspects of my personality, and helps me to conquer stress with relative ease.

Unfortunately, I am one of the people who experienced both stomach upset and occasional headaches on SAM-e, at least at first.  During the first few days I had these symptoms, but my mood was so bright that I hardly cared, and they virtually disappeared after day 4.  The first night I had a slight amount of insomnia, but I was still able to fall asleep within good time.  My daytime wakefulness was definitely improved at first, but after those first few days it wasn’t as prominent – although I avoid taking it too late in the day to avoid possible sleep disturbance.

Overall, SAM-e is by far the best supplement I have ever owned.  It has a positive impact on my life like no other nootropic has, and currently seems to hit closest to my sweet spot, whatever that might be.  The mood effects are clearly consistent, and I haven’t hit a wall emotionally in what seems like forever.  I do notice if I miss a day by accident, as my attitude will be more robotic and I won’t understand it until I realize the dose was missed.  Thankfully, this doesn’t happen anymore – it’s a morning habit.  Of course, everybody is different and might find that another substance works best for them.

SAM-e is a powerful supplement that deserves even more attention than it already gets.  The medical community sees its potential in treating multiple diseases, plus the nootropics community can see the value of safely increasing neurotransmitter production.  It’s worth a try for anyone, and definitely not a chance you want to miss.

‘I was extremely groggy at the time, and honestly went back to lie in bed because of mental fatigue’. That’s me in a nut shell!

It’s painful. Didn’t know what to do. Thought you ‘visualise’ yourself out of it. Say a few affirmations. Change my diet a bit.

Then came across an article on chronic fatigue.

My life’s changed and now here I am.

Like you, I cannot imagine life w/o a daily dose of 200mg of SAM-e.

Thanks for articulating something that was on my mind for a while now!