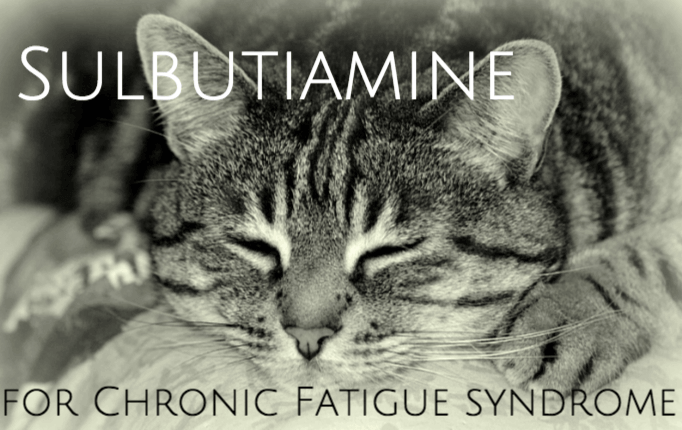 When other diagnoses fail, extreme cases of weakness and low vitality can be explained by a phenomenon known as Chronic Fatigue Syndrome (CFS).

In affected individuals, this is an extremely debilitating condition that can be the source of much hardship and frustration.

Fortunately, there are methods of treating this disease involving either cognitive-behavioral therapy or medication.

Antidepressants can help, though clinical research is mixed.

In recent years, a thiamine analog called sulbutiamine has attracted the attention of both doctors and patients attempting to treat themselves.

Thiamine, also known as vitamin-B1, is essential for proper nervous system function  Sulbutiamine consists of two thiamine molecules bonded by a “disulfide bridge”, which produces a form that more readily crosses into the brain than ordinary thiamine.

Besides providing an essential nutrient, sulbutiamine has been shown to affect the dopamine systems of the brain, which contributes to its therapeutic effect on CFS.

More specifically, this is helpful for asthenia, a subtype of CFS that originates from the central nervous system rather than the muscles.

Sulbutiamine normally appears as a yellow powder bearing a scent reminiscent of sulfur. It is usually pressed into tablets or packed into capsules for convenience.

Anecdotally, the taste of the compound is very unpleasant, giving another reason to not to ingest it as powder. One user goes so far as to say, “[sulbutiamine is] the VILEST powder I have ever tasted – like paint, only worse.”

Sulbutiamine acts on the body through a number of systems, many of them directly involving the nervous system and deep within the brain.

Chiefly, it is thought it helps CFS sufferers by the upregulation of neurons in reticular activating system, which is the brain’s center of arousal and motivation.

In this area, sulbutiamine increases the number of dopamine receptors and thereby increases cells’ sensitivity to activation by dopamine.

Since a lack of dopamine is associated with lowered energy levels, it seems quite fitting to treat CFS by compensating for this.

Another neurological effect observed with sulbutiamine is the potentiation of glutamatergic activity in the prefrontal cortex (when used with anticholinesterasic drugs), which has a positive effect on memory in patients diagnosed with early stage Alzheimer’s disease.

Off Label Use of Sulbutiamine

While Sulbutiamine can be prescribed for CFS under the brand name Arcalion, it is heavily used by healthy individuals for a purpose as a nootropic or mood enhancer.

Some people self-diagnose themselves as fatigued and seek this drug to help alleviate daily bouts of tiredness.

Others find that they enjoy the temporary boost in energy and motivation that sulbutiamine provides, even if they don’t normally complain of fatigue. The boosts to mood and memory ability are attractive, on a short term basis.

Sulbutiamine has been researched as a possible treatment for depression and erectile dysfunction, with preliminary results being positive.

The latter makes intuitive sense; sulbutiamine works by activating the Reticular Activating System (RAS) in the brain, a region essential for regulating important emotions like arousal, fear and motivation.

As with many newer nootropics, much of what we know comes from anecdotal user reports. There are a few reports that stand out. Here are their common themes:

A well-trained physician will likely know how to handle a drug such as Sulbutiamine properly, in the case of patients being prescribed Arcalion for CFS.

However in the case of off-label use, it is especially important to be aware of the strength and effects it has on the body.

Excess dopamine can cause psychosis and impaired cognitive function, neither of which are intended effects. Side effects of either group can include foul-smelling urine (due to sulfur content), headaches, irritation, and rarely an allergic reaction as with most drugs.

Dosing in the case of Arcalion is typically a 200mg tablet, whereas people taking a sulbutiamine supplement have more control over the amount they take.

For the safe off-label use of sulbutiamine, it’s recommended to start at around 100mg to assess tolerance and reaction, before slowly increasing upwards at an increment of 50mg to 100mg.

The manufacturer of Arcalion suggests taking no more than 600mg of sulbutiamine per day, as a safety guideline.

For sulbutiamine to reach its fullest potential, take it with food, drink, or perhaps some fish oil capsules.

A combination of the food and drink works best. When taken with a meal, the effects come on in 1 – 1.5 hours, and noticeably last for 6 hours.

Sulbutiamine is a promising treatment to help patients of Chronic Fatigue Syndrome, especially those of the asthenia variety.

It targets the very root of the problem within the brain and works to correct the neurochemical imbalance.

Many nootropics users are taking it for other conditions with varying degrees of success, and it has become popular in the supplement world as an off-label energy and brain booster.