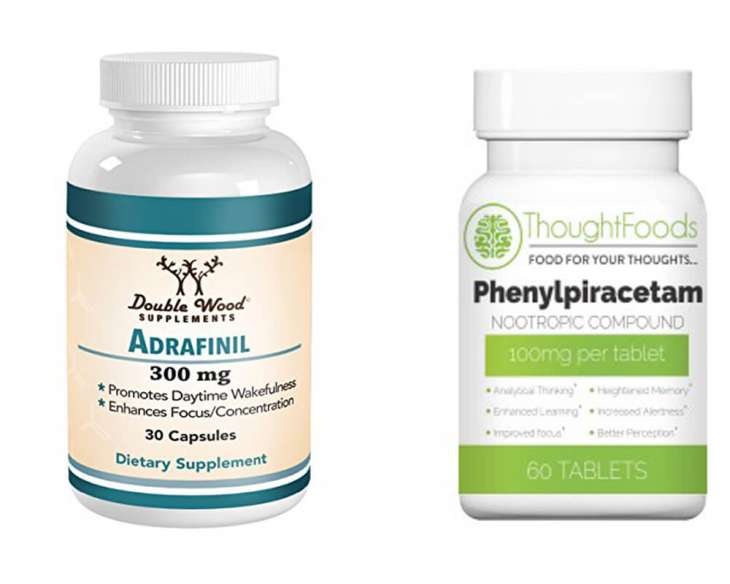 If you feel physically and mentally sapped, your overall performance is sure to plummet, whether that’s at school, work, or an athletic event.

Luckily, nootropics are here to help. In addition to improving creativity, memory, and processing speeds, these so-called “smart drugs” can also give you a boost of energy.

Two nootropics that are popular for their energy-boosting benefits are Phenylpiracetam and Adrafinil. But which of the two is the best of the best?

Here’s the verdict on Phenylpiracetam vs. Adrafinil when it comes to the best wakefulness nootropic.

Phenylpiracetam is a potent nootropic best known for its wakefulness benefits.

The chemical is closely related to Piracetam, one of the first nootropics to blow up in the mainstream. According to CNS Drug Review, Piracetam has a broad range of cognitive benefits, including improving concentration, learning retention, and memory.

Examine.com states that the only difference between the two nootropics is the addition of a phenyl group to Piracetam’s normal structure.

The similarity between the two nootropics means that Phenylpiracetam has all the same properties. The only big difference is that it requires a far smaller dose to achieve the same benefits.

The benefit I’m going to focus on today is wakefulness. Take Phenylpiracetam, and one of the first effects you’ll notice is an almost immediate boost in energy.

In my experience, this initially presents itself as a “fog lifting.” Any tiredness or fuzziness in your brain is immediately gone. Your thoughts are now clear and sharp.

If you’ve ever taken Adderall before, you’ve likely already experienced this feeling. The effects of Phenylpiracetam on your mind, energy, and mood are almost identical.

Unlike Adderall, however, Phenylpiracetam isn’t addictive. You can quit using it at any time without using withdrawal symptoms. Thus, the potential for abuse is far lower.

Adrafinil is another potent nootropic also revered for its ability to promote wakefulness and reduce fatigue.

Like Phenylpiracetam, it also has a close nootropic relative. In Adrafinil’s case, this similar nootropic is Modafinil. In fact, the liver turns Adrafinil into Modafinil as its processed by the body.

According to Environmental Health and Toxicology, both Adrafinil and Modafinil are very efficient at keeping you awake and alert. Modafinil is a common treatment for people with narcolepsy and other sleep disorders.

In my personal experience, the effects of Adrafinil are also very similar to those of a stimulant like Adderall. The first effects hit you within an hour and jolt you into a state of motivated, wakefulness.

Examine.com states that because Adrafinil is so powerful at increasing alertness and energy, it’s important to use it with caution.

Though it doesn’t come with the risk of addiction or abuse that Adderall does, it can be harmful if taken too frequently.

Similarities Between Phenylpiracetam and Adrafinil

Phenylpiracetam and Adrafinil have very similar benefits, as you can tell from my brief descriptions of the supplements above.

Both nootropics are designed to increase energy. The increased energy leads to improved ability to focus and concentrate on tasks at hand.

Phenylpiracetam and Adrafinil are both used to enhance overall mental performance as study and work aids. They’re becoming increasingly common on campuses and in workplaces around the country.

Another similarity between the two nootropics is the way in which the effects present themselves. Both are relatively fast acting, although Phenylpiracetam is perhaps slightly faster acting.

Both substances also provide long-lasting effects. The energy-boosting benefits of each last at full-strength for six to eight hours. Your motivation will be unparalleled during this time.

Differences Between Phenylpiracetam and Adrafinil

The most noticeable difference between Phenylpiracetam and Adrafinil is in the particular type of effects produced.

Adrafinil, on the other hand, is all about energy. It gives you a comparatively stronger boost of energy than Phenylpiracetam without a noticeable effect on memory or learning retention.

As I briefly mentioned above, the onset of the effects is also slightly different. Phenylpiracetam hits you almost immediately while Adrafinil takes around an hour to work its way into your system.

Which is Best for Wakefulness?

It’s hard to nail down which of these two nootropics is best for wakefulness since their effects are slightly different.

Adrafinil is best for pure energy and wakefulness. If you need to stay up and that’s it, this is the nootropic for you.

Phenylpiracetam is best if you need wakefulness plus an increased ability to concentrate on a specific task. It’s the supplement for those that need to get an assignment or project done.

Phenylpiracetam is also closest to a pure stimulant. You get that same initial jolt you get with caffeine, followed by milder effects. You’ll feel “stimulated”, akin to a strong cup of coffee, or low dose stimulant like Adderall or Ritalin.

Adrafinil, on the other hand, gives you a more drawn out feeling of wakefulness, without an initial jolt. This feeling differs a bit from pure stimulation.

It sort of creeps up on you, to the point where you just feel ‘woke’ (for lack of a better term). Anyone who’s ever taken Modafinil will understand what I mean; it has a wakeful focus, usually enjoyable and much preferable to feeling stimulated (in my opinion).

When it comes to choosing between Phenylpiracetam and Adrafinil, here’s what I recommend:

Another option is to create a nootropic stack. Select which of these two nootropics you like best and add other ingredients to the mix.

Creating a stack is particularly effective if you want to take Adrafinil for wakefulness, but also get some of the same brain-boosting benefits of Phenylpiracetam.

Try adding Huperzine-A, Vinpocetine, or Alpha-GPC into the mix for a more well-rounded nootropic supplement.

What about you guys – have any of you compared Phenylpiracetam vs. Adrafinil? Do you have any questions regarding the best nootropics for wakefulness?

Your research was very informative. It was exactly what I was looking for and I thank you for the detailed information. It’s going to help me out a lot in making my decision on which product to buy.
Sincerely,
Tammy A Harmon

These combine very well. Ive taken adrafinil on and off for years.. often for long periods (6+ months). 80-150mg is plenty but its fun to go 300-350 occasionally. Adding in the phenylpiracetam at 100-120mg helps focus and drive the wakefullness. It feels a little less agitating than oxiracetam (which I love) when combined with adrafinil. These also pair well with low doses <100mg DXM. Dont forget choline (alpha-GPC and CDP choline combo recommended).

Thanks for your research,it was precisely what I was needing to know in regards to what to expect as far as the stimulation effects of each supplement is concerned and very helpful in my quest to get off of amphetamines like Adderall and Ritalin so that I can conduct my own research very shortly!