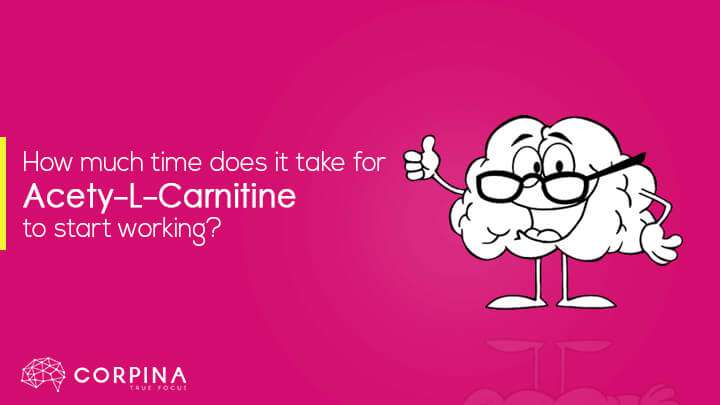 How Much Time Does It Take For Acetyl-L-Carnitine To Start Working?

Acetyl-L-Carnitine is a well-researched nutritional supplement that has some functions and uses in the body.

The “acetyl” group on the L-Carnitine amino acid helps to increase the bioavailability of the compound, meaning more of it gets absorbed and used by the body, improving your ability to focus and concentrate at work.

Acetylcarnitine has been specially formulated to improve mental energy because it is more active in the brain than other supplements.

So, how long does it take ALCAR to start working?

You’ll start to feel it about 30 – 45 minutes after taking the supplement. If you take it after a big meal, that could be an hour or more. But it’s important to note: you need to take Acetyl-L-Carnitine for about 3 or 4 days before you feel the full effects.

Why does that matter? And what are the recommended doses and what side effects should you be aware of?

What is Acetyl- L-Carnitine?

The Amino acid L-Carnitine forms the base in which acetylated Acetycarnitine is formed. Carnitine is naturally produced by the body and found in nearly every cell of the body.

After synthesis in the liver and kidneys of the amino acid lysine, it is transported to other body organs and tissues including the heart and the brain.

This energy-booster is tasked with transporting fatty acids into the mitochondria of cells where they can be burned for provide fuel for the body. Research has shown that high levels of L-Carnitine can lead to improved mental and athletic performance along with weight loss.

N-Acetyl-L-Carnitine is slightly different from the standard L-Carnitine since this compound also has an acetate molecule.

Because of this modified structure, Acetylcarnitine has been found to stimulate a larger percentage of activity in the mind compared to non-acetylated amino acid.

The acetyl component of N-acetyl-L-Carnitine helps them through something called the “blood-brain barrier” easier to be absorbed by the cells of the brain at a higher rate.

The effects of N-acetyl-L-Carnitine products are mainly concentrated in the brain tissue. Therefore, when using this supplement, your mental energy levels will increase because your brain cells are supplied with more power.

The activity of neurons is improved which in turn enhances mental functioning across the board. This explains why so many people who use this supplement say it gives them better concentration, attention span, and even better memory.

How fast does Acetyl-L-Carnitine work?

It can improve the energy production in the brain, act as an antioxidant and promote the release of acetylcholine from the 3rd or 4th day of use.

However, after its ingestion, it takes about an hour to start working in the body. Its benefits last for more than half a day.

Most people use between 500 and 1,500 mg per day of Acetyl-L-Carnitine powder with a few taking as much as 3 grams per day without adverse effects.

Dosages for supplements still require some customization to your own level of sensitivity because it may not match those of other users.

It is recommended to initially begin taking a lowest effective dose and gradually titrate slowly up to the quantity that produces desired outcomes.

Acetyl-L-Carnitine usually works best when it is stacked with choline and other Nootropic supplements.

Choline source used for one of these batteries is paramount to help you avoid headaches. You might consider stacking with a supplement such as Centrophenoxine.

Some people may experience restlessness, insomnia, and possibly an erratic heartbeat. These side effects will be exacerbated if you take more than the recommended doses.

The same effects can be noticed if taken too close to bedtime. Side effects may include minor headaches, nausea, or dizziness.

Some drugs have been reported to cause violent interactions with acetylcarnitine, and you should consult a doctor if you are taking AZT, Doxorubicin, Accutane, thyroid hormone, valproic acid or Depakote.

In addition to turning up the production of energy in the brain, Acetylcarnitine may also help slow brain aging. It is a profoundly powerful antioxidant, working to eliminate toxins, strengthen and repair receptor neurons in the brain.

Taking Acetylcarnitine with Alpha-Lipolic acid also reduces the presence of damaged fat, such as lipofuscin, which tends to accumulate in the brain.

It is this kind of damage that is often implicated as a cause of Alzheimer’s disease and Parkinson’s. Research has also shown this supplement can prevent the deterioration of the brain during times of stress.

This product is well recognized for its ability to empower myelin sheaths that engulf and protect the nerves, which is essential for a proper electrical signaling between nerve cells.

Give it a try, and drop a comment in the section below!

Supplements for working out

It was clearly stated in the section titled: “How fast does Acetyl-L-Carnitine work?”

I bolded it, and added the exact same text to the intro so you don’t waste any more time wasting my time. 😉

Thanks for such a concise and well informed answer. Ive taken many supplements – for a mitochondrial condition that leaves me exhausted and I’d not noticed any change. This one is different. I had previously taken it sporadically with no benefit – but last week I started taking it methodically and properly. Energy levels much improved soon after taking it – hence my googling this question. I am convinced its a physiological rather than a psychological effect (though frankly i don’t care whether its either or both. It really helps).

Just read that “Taking Acetylcarnitine with Alpha-Lipolic acid also reduces the presence of damaged fat, such as lipofuscin, which tends to accumulate in the brain.” I noted that Alpha -Lipoic acid should take on empty stomach and ALC is better to take with food. According to that when is the best time to take both supplements together. Thanks in advance.

I have just started this today in an effort to feel some relief from the symptoms of Myalgia Encephomyalitis. Keen to see how it goes, thank you for putting this article up, very helpful

Are you still taking it? How’d it work for you….I’m just starting 1,500 a day for fibromyalgia fatigue

I have taken 500mg of ALCAR per day for 3 consecutive days, and I feel a little too wired (this stuff is more potent than caffeine), is this normal? Should I skip some days in-between?

No you should not feel that way. I’m not a doctor but a health fanatiic. I eat healthy, runand lift weights. I have two kids and am 37. I have been supplementing with acetyl carnitine for years in small and large doses. You should NOT feel like that. Please talk to your doctor. Best of luck.

I started taking ALCAR for the first time 7 days ago. I was a little nervous so I started with only 500mgs twice a day and have not felt any effects from it. I am a 47 yr old woman and I wanted to find a supplement that not only worked on my brain but gave me the energy and stamina I needed to help me lose weight and get through my workouts. So that’s when I found ALCAR. Since I have not felt anything at all for 8 days now should increase my dose to 1000mgs twice per day? Should I take it for 7 days to see if that dose works for me? I would sincerely appreciate your input.

Hi- I,m a 70 year old man just starting with 500 mg. I,m hoping it helps with mood. It would be a godsend if it works in that way. Thanks and I,ll keep you posted.