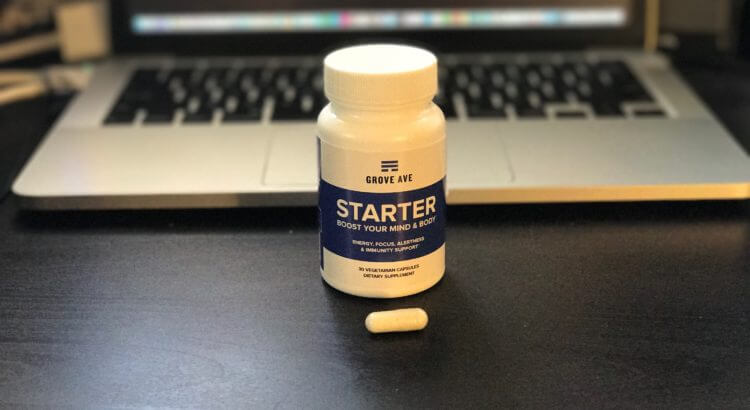 Caffeine and L-theanine is recognized as one of the most popular nootropic stacks available on the market.

Almost every major supplement seller has some variant of the stack and they recently came across one from a new company, Grove Ave, whose flagship supplement — Starter — combines the proven smooth energy boost of caffeine + l-theanine with an immunity boosting component made up of Vitamin C and echinacea. While I didn’t really feel the effects of the immunity booster, I wonder if taking Starter in the long term would reduce the in

Grove Ave calls this combination Starter and it’s designed to replace the two things most people take in the morning: a daily vitamin and your cup of coffee.

With the myriad of other energy boosting stacks out there, caffeine and l-theanine remain one of the most frequently consumed.

Part of the reason for this is that there has been more extensive controlled research on these two compounds than almost any other nootropic in existence.

Another part of the reason is that the research overwhelmingly shows that the stack has beneficial cognitive effects while being safe and effective, along with minimal risk of addiction and other negative side effects.

Finally, while other nootropics have differential effects on individuals, Caffeine and L-theanine seem to work near universally (with the amount consumed calibrated to the person’s body weight).

By adding two proven immunity boosting components, Grove Ave has designed a product that dovetails with their overall philosophy.

A new entrant to the nootropics space, the company primarily maintains a life-coaching and personal growth site and has developed a nootropic to help their followers save time and money.

Coffee either takes time to brew or if you don’t brew your own you’re typically shelling out $2-4 a day.

By combining the daily vitamin and morning coffee into a single pill, Starter is supposed to help people save money and time.

It’s worthwhile to review the research that supports Starter. Here is a by-ingredient breakdown with peer-reviewed research and academic references cited.

Caffeine is by far the most commonly used nootropic, consumed worldwide for its energy-boosting effects. For thousands of years, caffeine has been used as a cognitive enhancer to improve attention, concentration, and working memory. Recent research has shown that caffeine has additional benefits as well, improving physical endurance and lowering the risk of dementia, cancer, and stroke. However, too much caffeine can sometimes cause anxiety and jitteriness, and that’s where L-Theanine comes in.

L-theanine is a less well-known nootropic, but is found in green tea and many common dietary supplements.

On its own, L-theanine has been shown to improve learning and memory by modulating levels of neurotransmitters in the brain, but its true potential shows when it’s combined with caffeine.

The ratio of L-theanine to caffeine that they used to make Grove Ave Starter has been rigorously tested in numerous scientific studies, and has been shown time and time again to significantly improve cognitive performance and elevate mood, without the anxiety and jitters caused by caffeine alone.

Echinacea is a plant native to North America that was widely used by Native Americans for its medicinal qualities15.

More recent scientific studies have shown that echinacea extract has beneficial effects on your immune system, boosting the activity of several different types of cells that are integral for natural immune responses.

They included echinacea in this daily supplement to strengthen your body’s immune system so nothing can stop you from achieving your goals.

You’ve probably heard of vitamin C, an essential nutrient involved in many of your body’s metabolic functions which is found naturally in many types of fruits and berries.

But, did you know that vitamin C is also good for your brain?

Vitamin C is directly involved in the production of neurotransmitters, molecules that provide chemical signals in the brain. In this stack, vitamin C is included as a daily booster for the function of your body and mind.

With the plethora of options out there for a caffeine l-theanine stack, I found the combination of a “little something extra” intriguing.

Having taken caffeine l-theanine before, I first wanted to compare how I felt after taking Starter to the plain stack.

To be honest, I didn’t feel differently at all– although based on how new Starter is, I did find the caffeine to be a little more potent than other stacks (probably due to lack of degradation).

I took the recommended one pill and I definitely felt more alert and the effects lasted for three to four hours at least.

While I didn’t really feel the effects of the immunity booster, I wonder if taking Starter in the long term would reduce the incidence of getting colds.

After all, the combination of Vitamin C and echinacea is one of the primary components of Airborne. I also like the fact that Starter comes in vegan capsules.

For a staple stack such as caffeine l-theanine, I can definitely recommend Starter. As a first time entrant into the nootropics space, the company is at least thinking about how to improve on existing products.

They are even considering expanding their product line if there’s enough interest. They provided this preview exclusively for Corpina readers and you can vote on which stack you want to see here.

Some more details on the stacks:

The relaxation stack is designed to increase memory performance and alleviate the effects of fatigue and stress.

They selected rhodiola rosea and bacopa monnieri, two plant extracts that have been used for thousands of years in herbal medicine and have been rigorously tested in recent scientific studies.

Rhodiola rosea is a powerful stress-reducer that lowers the levels of stress hormones in your body, to help you feel relaxed.

They also included bacopa monnieri, to provide additional reduction in stress as well as a boost in memory and learning performance.

The concentration stack is designed to give you a boost in cognitive performance by improving your mood, and increasing your attention and learning abilities.

They have selected noopept and choline bitartrate, two compounds that improve communication pathways between different brain areas by increasing levels of a signalling chemical called acetylcholine.

These ingredients provide a wide array of cognitive benefits, increasing your short term and long term memory, boosting your attention, and narrowing your focus, so you can concentrate on the task at hand.

The sleep stack allows you to wind down and recharge by making it easier to fall asleep and improving sleep quality.

They selected melatonin, GABA and 5-HTP, all compounds which are found naturally in the human body and have been scientifically shown to be effective sleep-enhancers.

Melatonin is a naturally occurring hormone that your body uses as a signal to control sleep and wake cycles, which helps you to initiate sleep.

They also included GABA and 5-HTP, brain signaling molecules that increase REM and deep sleep cycles, to increase the quality of your sleep and facilitate the natural benefits of getting a good night’s rest.

They rounded out this formula with Bacopa Monnieri, to provide additional reduction in stress as well as a boost in memory and learning performance.