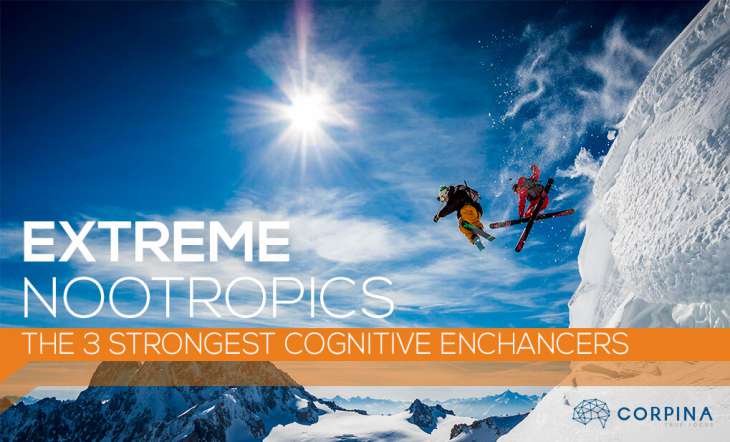 In the field of nootropics, whether you’re a newbie or a well-seasoned expert, there are a lot of different options to try.

Every day, people discover new formulas or chemicals that have a beneficial interaction with their bodies.

However, many of the supplements that are taken only have mild effects – which makes them subtle (yet effective) but also very safe to experiment with.

For some people, the regular battery of nootropics isn’t enough.

Perhaps they have genetics that make them resistant to typical “treatments”, or they are daredevils that like to push themselves to the limit.

These people have gone through hoops to acquire some of the most powerful brain-enhancing drugs known to exist, risking potential side effects but experiencing one hell of a ride.

They’ve tested supplements at the fringe: what I call EXTREME nootropics.

The Absolute Best and Most Powerful Nootropics

Extreme nootropics are not to be taken lightly.  They are often rarely known about, newly researched, and possibly dangerous if used incorrectly.

Nevertheless, here are some of the substances for the daredevils out there, whom we strongly recommend be experts in biochemistry and supplementation for their own safety.

Our first mentioned extreme nootropic, Desmopressin is a synthetic derivative of one of the brain’s natural peptides, vasopressin.  The chemical difference between the two causes the former to break down more slowly in the brain, prolonging its effects compared to its natural counterpart.

Desmopressin seems an unlikely nootropic at first, given that its main use is to limit the amount of water eliminated from the body in urine.  It is commonly prescribed by doctors as a treatment for bedwetting in people who have the problem past the normal age it happens.

However, the same chemical reaction that alleviates an embarrassing medical condition also serves to profoundly impact memory ability.  A double-blind study conducted in 1997 showed an improvement in concrete memory of words of healthy adolescents after a nasal spray form of desmopressin was given a mere 60 minutes ago.

After chronic treatment, the same study revealed a faster reaction time in a scanning for memorized digits.  Overall, it was shown to greatly enhance the storage processes and less effectively, enhance retrieval.

Besides the massive improvement in memory, desomopressin should be considered extreme because of the dangers associated with its misuse.

Due to its ability to restrict the passage of water out of the body, it can throw off the ratio of electrolytes to water.  Since this balance is critical for maintaining homeostasis, an overdose of desmopressin or drinking slightly excessive amounts of water could lead to serious health consequences.

Therefore, the only way to get it (legally) in most countries is by prescription.  Usually, the form of it is oral, as the use of nasal spray has been linked to seizures in children.  I won’t even mention the dosages, as the only safe way to try this evasive nootropic is by getting it through a doctor.

Another member on the front lines of extreme nootropics is a class of drugs called Protein Kinase RNA-Activated inhibitors, or PKR inhibitors.

There is a lot of interest involved with these compounds pertaining to their method of action and the enhancement to memory, especially involving the processes of learning.

While still a relatively new topic (as with desmopressin), PKR inhibitors have been shown to increase memory capacity to an amazing degree.  This is an important factor in intelligence, and gives the nootropic value to them.

A notable example on the data produced by research into PKR inhibitors is an experiment that was done with mice in a maze environment.

After administering a single dose of a PKR inhibitor to the experimental group, they were able to finish the maze after only a single training session.

The control group of mice needed several sessions to accomplish this.  These impressive results in mice may not perfectly translate to humans, but the foundations are being set to develop entire sets of new nootropics of this strength.

Right now, a specific PKR inhibitor called C16 is available for human usage, although there aren’t any large formal studies that demonstrate its effects.

What makes PKR inhibitors an EXTREME example is how it works.  It essentially disables a security feature of the brain that helps to prevent viral infections.

How this sounds seems rather dangerous, although there are no known issues observed yet.  So far, the studies done on cells and mice have demonstrated the huge potential PKR inhibitors have for animal brains, and give us a glimpse of what to see in the future.

Possibly the most interesting extreme nootropic I’ve heard of, cerebrolysin, is the pinnacle of learning and plasticity enhancers.  It is essentially a specific blend of peptides naturally found in the human brain, which aid in the repair of neurons system wide.

Also, it reduces the production of beta amylase, which causes the buildup of plaques in the brain – a huge factor behind Alzheimer’s disease.

In fact, research was done on a total of about 5000 Alzheimer’s patients so far, and it has shown dramatic improvements in those suffering.

Cognition, memory, and learning were all improved across the board!  In healthy individuals, it can be taken to produce a wonderfully improved learning ability, as cerebrolysin helps neurons to build and grow extra quickly.

Cerebrolysin is an ideal nootropic for academics, or anybody who needs to learn a lot of information very quickly.  The effectiveness is unheard of, dwarfing the power of countless other nootropics of its class.  The only downside is that it requires an atypical method of administration – intramuscular injection.

The typical dose is 5ml from an ampoule.  Many people will object to the extra effort and pain involved, which limits the testing audience of cerebrolysin.  Needless to say, you should only attempt to use this extreme nootropic if you know what you’re doing, especially with the factor of injection involved.

If you have what it takes to try some of the most powerful intelligence enhancers known to mankind, the option is available.

All three of the drugs I mentioned are either super expensive or hard to find, so it is further implied that these are for the elite – the people who have the resources and experience to handle such extraordinary nootropics.

However, anyone can reach this point with enough hard work and just the right stack to push them along.

Remember, these are just suggestions – not medical advice! Be careful out there, and good luck.

Have you tried any “EXTREME” nootropics? Please share them in the comments.

Click Here to Leave a Comment Below 3 comments
Some of the Natural Supplements That Can Boost Your Concentration Level | NVZ Global - June 8, 2016

[…] of the best supplements available in the market. You can buy L-Tyrosine and take it along with any strong nootropic then you can improve your concentration level […]

Cancel Reply
Does Modafinil Have Any Side Effects? - ModaPharma.com - October 11, 2016

[…] a strong cognitive enhancer, this drug offers a lot of benefits when used in medical and off-label applications. Several […]

I want to know that out of all the possible cognitive enhancer drugs available in the market, how many of them are nootropics ?