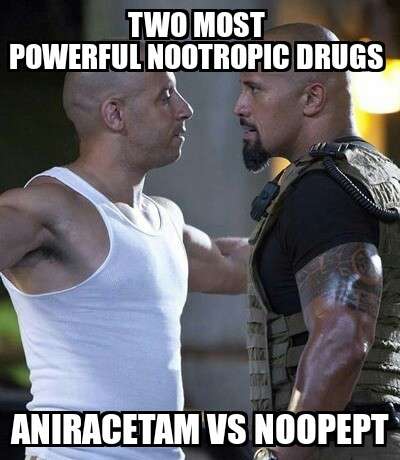 Comparison is the death of joy. – Mark Twain

Maybe true for life, but when it comes to taking nootropics we must compare them to understand how they work and which works best for your brain.

To make your life easier we have examined a few products with a fine-tooth comb and as a result you will be able to keep your fingers on the pulse after going through this comparison.

Aniracetam, Oxiracetam, Noopept and other common Nootropics, all of them work like a charm.

If you want a straightforward best nootropics comparison, then you’re in the right place. Read on and fling yourself into action every day.

All Racetams are good in their own way and there is no simple method to describe which is the best.

Well, you can opt for the Racetam that suits you the best by checking out their effects and the one that’s a perfect fit for your brain’s biochemistry.

It has many anti-anxiety properties, probably because it also belongs to an Anxiolytic family.

Due to its unique molecular structure it belongs to both the Racetam and Anxiolytic class, and has the potential to reduce anxiety levels and can enhance the mood of the user.

Aniracetam is also fat-soluble, meaning it’s a great way to start your day with bacon, avocado and eggs (or if you prefer, coconut oiled-coffee).

Usually the effects don’t last for a long time and that’s one of the downsides of this particular Nootropic drug.

To compensate this you need to take several doses every day. Considered the best among the Racetam lot for verbal fluency, mood and cognitive enhancement, and social gatherings.

It is best-known for boosting the logical abilities of the brain and is an excellent pill for solving mathematical problems faster.

Well, that’s obvious because execution of problems of this nature involves the extensive use of logic. It also gives a slight boost of energy as it is one of the Racetams that provides a stimulatory effect.

A well balanced Nootropic pill that is best suited for increased energy level, solving logical reasoning problems along with a slight cognition enhancement.

Alas, both of these Racetams are highly effective and but have their own set of drawbacks, so you need to try out different Nootropic stacks for a week or two to find out the best that suits you.

It is a fast acting cognitive enhancer that is considered as one of the most powerful Nootropic drugs present in the market. How powerful?

Believe me, it’s nearly 1000 times to 5000 times more powerful than Piracetam. It is very popular because of it’s effects.

Comparatively it gives you more mental strength, wider attention span, increases the effects on memory and the ability to learn, sharper focus and a better concentration.

Several researches and findings have shown that Noopept has the ability to cure several conditions and is currently being studied for use as an alternative to the traditional treatment methods for Alzheimer’s.

Some evidence also brings to light the fact that Noopept can be a cure for dementia, mental retardation and other worsening cognitive disorders.

Noopept has neuroprotective properties i.e, it can protect the neurons from getting damaged from consuming alcohol and also can reverse certain types of damages.

This neuroprotective effect is present maybe because Noopept increases the metabolism rate and the consumption of oxygen by the body, improved blood-flow to the cells, ultimately the neurons.

I’ve already discussed the effects of Aniracetam so instead of repeating the same thing, let’s have a look at Aniracetam and Noopept combo.

Several studies has shown that combining 20mg of Noopept with 750mg of Aniracetam has the following effects.

Although, this combo has no serious side-effects to be worried about, it does make you crave for a prolonged sleep.

This combo is also easy on your pocket. Note: It is better to consult a physician before taking this combo.

As with all nootropics, we suggest you to use the best nootropic drug and dosage for you.

Be motivated. Be stress free and you’ll never have a reason to compare yourself with others.