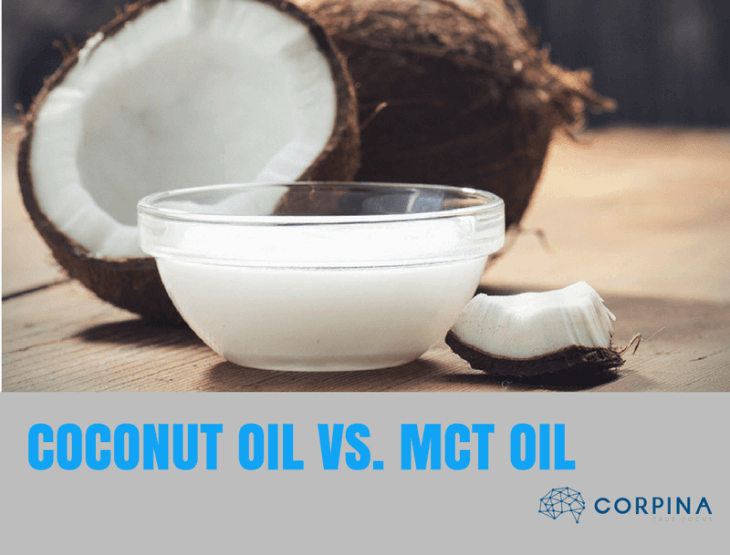 Many of you may be scratching your heads right now at the idea of choosing between coconut oil and MCT oil, probably because shrewd marketing has led you to believe that coconut oil is jam-packed with MCT oil.

For those of you who haven’t heard of MCT oil, the MCT stands for medium-chain triglycerides that possess fatty acids with an aliphatic tail multiple carbon atoms.

MCT oils are well-regarded because they are readily digestible and advantageous fats that produce long-lasting energy. They have been known to aid in weight loss and assist in cognitive function.

On the other hand, coconut oil has been called a “life-saving” oil that offers a range of benefits and essential acids including caprylic acid, capric acid and lauric acid. Food and medicine guru Dr. Axe has called it an amazing fruit.

So many of you are aware of MCT oil and coconut oil because they are used in natural food and beauty products.

But the debate is on as to which is better — coconut oil or MCT oil. As some of you have probably read, coconut oil is marketed as being rich in MCT oil, but some wonder whether the claims are true.

The Truth About Coconut Oil

The coconut oil industry would have you believe that coconut oil is an ideal source for MCT oil, owing to the fact that it supposedly contains sixty-two percent of MCT oil.

The problem is, studies support the idea that coconut oil cannot truly provide a sufficient amount of MCT oil.

But not everyone agrees with this assessment and some have come out in defense of coconut oil, calling it superior to MCT oil. As Health Impact News is quick to note, MCT oil is manufactured while coconut oil is natural.

They also do their part to try and shut this conversation down, writing, “Is MCT oil better than coconut oil? No, of course not. How can a product that has the most famous and most dominant fatty acid removed from the original product be considered “better”?

They also state that, unlike MCT oil, lauric acid is unique to coconut oil, making up fifty percent of its fatty acids. It is also worth mentioning that 91% of the fat in coconut oil is healthy saturated fat.

Perhaps what is most impressive about coconut oil is its proven ability to help repair damaged brain function in those suffering from the devastating effects of Alzheimer’s disease. But it doesn’t stop there…

Aside from the ketones coconut oil produces in the liver (which improve brain functioning and help speed up the transition into ketosis), it also works to convert bad cholesterol into good cholesterol, thereby protecting against high blood pressure and cardiovascular issues.

Many medical professionals have written extensively about the sundry benefits coconut oil consumption can unlock including potential protection against liver damage, osteoporosis and gum disease. It is also considered an anti-aging remedy that may also play a role in balancing hormones.

Coconut oil is really just a venerable natural food in virtually every way one could think of. It supports the immune system, prevents and treats cancer, improves skin problems and Type II Diabetes, and builds muscle.

It has been embraced by the bodybuilding community for its calorie-burning capacity and is the subject of many a pro-oil YouTube video. From obscure conditions like candida to more common problems like yeast infections, coconut oil can help.

It’s kind of astounding all the areas in which coconut oil can be of assistance from colitis and ulcer reduction to elimination of acid reflux and alleviation of pancreatitis. It is an organic panacea for not only pancreatitits but also heart disease and kidney infection.

You name it, coconut oil is there to help! When we talk about superfoods, coconut oil should be at the top of the list. A lot of us have long been lead to believe that saturated fats are a health no-no, but modern science has debunked the theory.

As a New York Times expose made very plain, “…while it’s true that most of the fats in virgin coconut oil are saturated, opinions are changing on whether saturated fats are the arterial villains they were made out to be.

According to Dr. Brenna, a noted specialist interviewed by the New York Times, “I think we in the nutrition field are beginning to say that saturated fats are not so bad, and the evidence that said they were is not so strong.”

Some of you will remember when movie theaters discontinued their use of coconut oil for buttering their popcorn, first in 1994 and again in 2009.

This was due to the efforts of a consumer group called Center for Science in the Public Interest who falsely claimed that a large-size serving of popcorn contained as much saturated fat as six Big Macs.

Fortunately, popular demand forced the hand of movie theater chains and the coconut oil was restored, but this didn’t stop people from conducting studies into the effects of coconut oil.

Initial studies suggested that coconut oil was instrumental in atherosclerosis, a hardening of the arteries, but these claims proved to be utter BS once more in-depth studies were undertaken.

Virgin coconut oil has a unique impact on a person’s cholesterol profile, one that runs parallel to that of hydrogenated oil. Therefore, it is not possible for it to cause atherosclerosis.

The Truth About MCT Oil

MCT oil is undeniably healthy and worthwhile, but is it “better” than coconut oil? The answer, of course, is no. But that doesn’t mean it should be written off entirely.

MCT oil is quickly digested and goes right to the liver. They exert a thermogenic effect and aid in proper metabolism. They are burned for energy whereas other fats are stored up.

According to Be Brain Fit, MCT oil may be beneficial to those afflicted with depressive disorders as well as Alzheimer’s disease. It has also been implemented to feed premature babies and to help kids with epilepsy.

MCT oil has found favor with bodybuilders for its ability to increase lean muscle mass. Like its predecessor, it is known to promote energy and protect against the effects of aging.

MCT oil also supports gut bacteria, exerting antiviral and antibacterial properties. It has become so popular for this reason that it has been implemented as part of what is being called the “leaky gut diet.”

Here is where it gets tricky, folks.

There really can’t be a clear and concise case for one over the other. Coconut oil is very rich in MCT’s, but the MCT oil manufacturers produce a more concentrated oil than coconut oil.

But while MCT oils are more concentrated, they do not contain any beneficial forms of MCT.

In summation, if you are looking for a swift kick in the pants, one that affords you energy with some staying power, then MCT oil is the oil for you.

But if you want to reap the full benefits of lauric acid, benefits that include immune support and much, much more, then you need to get your hands on some coconut oil. STAT!

Where To Buy Coconut Oil?

Much has been written about coconut oil and the best sources for purchasing it.

A handy guide has been drawn up over at Evolving Wellness which clarifies the difference between virgin coconut oil and refined coconut oil and explores the intricacies of processing methods and more.

In this piece, they delve into ideal distribution, weighing the value of glass jars versus plastic jars, and discussing whether or not one should seek out organic coconut oil as opposed to conventional coconut oil.

According to BestReviews.com, the best value for your money is Carrington Farms’ Organic Extra Virgin Coconut Oil which they say is a high-quality oil at a bargain price. A 54 oz container goes for just $16.99.

They also highly recommend upgrading to Viva Labs’ coconut oil. Billed as the finest organic extra virgin coconut oil, this one is said to be a cold-pressed oil with a pleasant taste and aroma, and a smooth texture.

A 16 oz container sells for $8.51 on Amazon where consumers have called it an “excellent product for the price.”

Where To Buy MCT Oil

For those looking to buy straight MCT oil, there are plenty worthy concoctions out there.

BulletProof, one of the most well-known nootropic companies out there, offers what they call BulletProof Brain Octane Oil.

Brain Octane Oil retails for $23.50; its purported benefits include reliable and quick energy, fat burning ability and enhancement of cognitive performance. It is distilled from 100% pure coconut oil. It is said to contain “quality fats that don’t weigh you down.”

Bulletproof Brain Octane currently holds a 4-star rating among Amazon customers with consumers calling it “incredible” and “great stuff.” However, others have complained of the poor packaging and some have reported no difference in energy since they started using it.

This kind of goes back to what we were talking about earlier. If you really want the real deal, there is no substitute for pure virgin coconut oil.

Another well-regarded vendor for MCT oil is Perfect Keto. They produce MCT Oil Powder with the only MCT oil that uses acacia fiber and has ZERO fake ingredients. Since it’s in a powder form it’s also good for travel and easy to take with you wherever you go. You can get it from Perfect Keto shop.