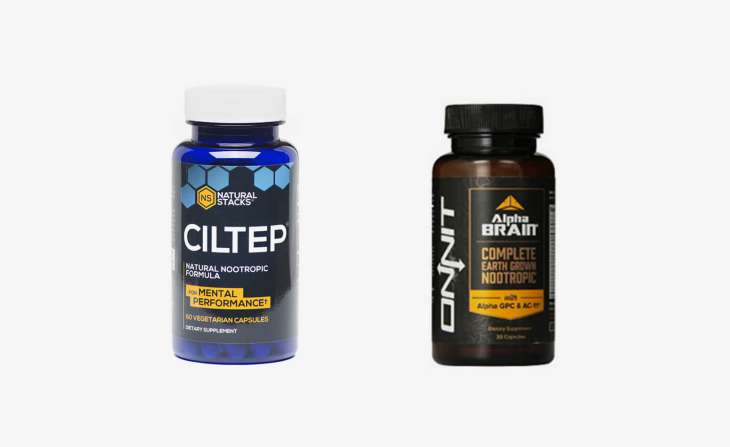 Few nootropics are as popular as Alpha Brain.

Just as many regular people, like you and me, also swear by the brain enhancing effects of Alpha Brain.

CILTEP, on the other hand, might not be quite as popular as Alpha Brain, but that doesn’t mean it’s not as effective.

Though it’s newer, less time-tested, and somewhat more controversial than Alpha Brain, there are hundreds of people that claim CILTEP as their favorite nootropic supplement.

Rather than go by what others have to say about these brain-boosting stack supplements, I decided to try them both for myself.

Though I thoroughly research and compared each nootropic, my goal was to find out which of the two is better for long-term use.

Here’s my head-to-head comparison of CILTEP vs. Alpha Brain.

CILTEP is a nootropic stack created by Natural Stacks, a popular manufacturer of other supplements including BioCreatine and MagTech.

What sets CILTEP apart from much of the competition is its all-natural ingredients. Every single ingredient is 100% natural for the safest, healthiest benefits possible.

So what’s in CILTEP that brings about these benefits? The ingredients, and their stated benefits, include:

According to Natural Stacks, these natural ingredients give CILTEP its amazing mental benefits.

Students, business executives, entrepreneurs, and creative professionals most commonly use the supplement.

My Experience with CILTEP

I never completely trust what companies say in their marketing materials about their nootropics.

So I tried CILTEP for myself. I wanted to experience the full range of its benefits, so I used the supplement for an entire month (if you’d like to try CILTEP for free – sign up to my newsletter from the homepage to find out how to get one bottle).

The results were almost immediately noticeable. Roughly an hour after my first dose of CILTEP, I felt a slight burst of energy coupled with an improved ability to focus.

I had a big project for work I needed to finish, so I buckled down and dove in. I was surprised at just how much more I got done than normal. These feelings continued over the next few weeks.

Something that I was surprised about at the end of the month was that I could immediately remember and recall information I’d learned in my first days of taking CILTEP.

A mild stomachache that lasted only a few days was my only negative experience. I believe this was simply my body adjusting to CILTEP’s ingredients.

Alpha Brain is a nootropic stack created by Onnit, one of the most well-respected nootropic supplement manufacturers around.

The compound is designed to improve mental function as a whole. In particular, Alpha Brain is said to enhance memory, focus, and energy in both the short and long term. The benefits of the nootropic are backed up by a study in Human Psychopharmacology.

It’s important to note that Alpha Brain contains a lot of ingredients. The long ingredient list means its more expensive than many other nootropics that contain only a handful.

So what’s in Alpha Brain? The ingredients, and their stated benefits, include:

Students, CEOs, and athletes are only a sliver of those that can benefit from taking the Alpha Brain nootropic.

My Experience with Alpha Brain

When I tried Alpha Brain for myself, I felt a near immediate boost of energy. Seriously, the increase was noticeable in a half hour tops.

Soon after that, I noticed additional effects including increased focus and alertness. These effects lasted several hours and were possible to maintain by taking the capsules as directed.

Like CILTEP, the benefits of Alpha Brain seemed to pile on top of each other with continued use. At the end of the month, I felt like my mental performance was on point. My memory was improved as was my ability to accomplish complex tasks.

I didn’t experience any of the mild side effects (stomachache) with Alpha Brain that I did experience with CILTEP.

CILTEP and Alpha Brain are fairly similar as nootropics.

Personally, I felt the effects of Alpha Brain much more strongly. They never felt overpowering or overwhelming though.

I’d recommend Alpha Brain over CILTEP for most people. However, you might prefer CILTEP if a choline-class brain-builder is specifically what you’re after.

Both CILTEP and Alpha Brain get the job done. The best nootropic for you depends on your individual needs and preferences.

Here’s what you should do:

Another option is to build your own nootropic stack. Because both CILTEP and Alpha Brain have a lot of ingredients, they probably contain a handful you don’t really want or need.

A DIY nootropic allows you to add only those that you do want – in the quantities you desire.