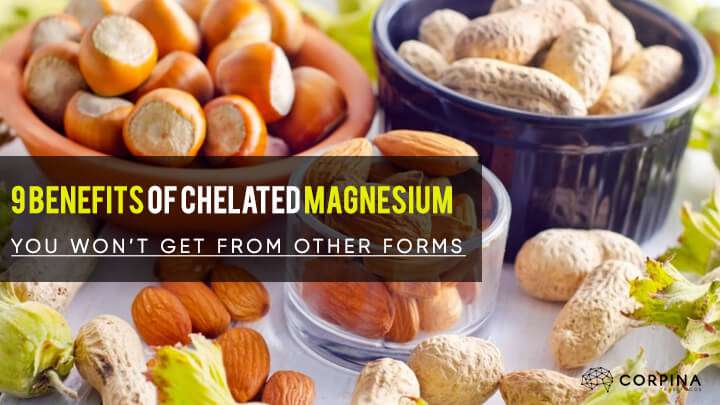 Magnesium might not be a nutrient you think about that much. But, every single organ in your body needs magnesium to function. Although you can find magnesium in a wide variety of foods, many of us (up to 80%, according to Dr. Axe) just aren’t getting enough of it.

It’s not just getting the right amount of magnesium that matters. How you get the mineral is important too. Food’s obviously a great way to boost your magnesium intake, but if you can’t get enough in your diet, chelated magnesium is one of the best forms available.

In the US, it’s very common to be anxious. In fact, it’s so common that anxiety disorders are among the most common psychiatric disorders in the country.

A study that intentionally deprived a group of mice of magnesium found that those mice became more anxious. It also examined how those mice responded to various treatments before concluding that low levels of magnesium played a direct role in increasing the animals’ anxiety.

But enough about mice. You want to know how chelated magnesium can help people. In 2006, a team of researchers published a paper that examined the effect of various types of chelated magnesium had on depressed and anxious people.

Patients took magnesium taurinate and/or magnesium glycinate (the types found in MagTech from Natural Stacks). Their results were impressive, to say the least.

One woman, age 35, had a history of pospartum depression. She was pregnant with her fourth child when she began taking 200mg of magnesium glycinate with her meals. Both the pregnancy and delivery went smoothly. Even better, she didn’t have any symptoms of postpartum depression or anxiety.

Another participant in the study, a 40-year-old man described as “anxious, talkative and moderately depressed,” took a form of chelated magnesium with meals and before bed. The researchers found that his symptoms vanished within a week.

It might not be much of a secret that magnesium can help improve your regularity. Take a look at pretty much any laxative and you’ll most likely see magnesium listed as an ingredient.

Here’s the thing, though. Some forms of magnesium (I’m looking at you, magnesium oxide) work a little too well when it comes to easing constipation.

If you are having some digestive troubles, you want a kinder, gentler type of magnesium. That’s because the larger the molecule the magnesium is bonded to, the less of it you need to have to get results.

One popular form of chelated magnesium is magnesium glycinate. In this form, magnesium is bonded to glycine, an amino acid. It’s typically the most easily absorbed form of magnesium, according to Dr. Mercola. If you’re concerned that your magnesium levels are low, this is the best type to take to quickly boost your levels.

How much magnesium do you need each day, anyway? The recommended amounts for adult men are between 270 and 400 mg. For adult women, it’s between 280 and 300 mg. If you’re pregnant, you’ll want a slightly higher amount, between 320 mg per day. You’ll want the most if you’re breastfeeding, between 340 and 355 mg daily.

Fibromyalgia is a condition that interferes with the way your brain processes pain signals. People with the condition often have pain all over their bodies. Their sleep might be interrupted and they may have memory or mood symptoms too.

There’s no cure for the condition, but many people find relief by improving their diet, reducing stress levels and exercising. A recent study argued that low magnesium levels could play a part in the development of fibromyalgia symptoms.

The study gave patients eight weeks of treatment with magnesium malate, a type of chelated magnesium. It found that the patients who received the magnesium had an improved in their tender point index after the end of eight weeks.

One of the biggest concerns to public health is the continuing spread of diabetes. No longer just a “western problem,” diabetes is now a major concern in countries around the world. For example, nearly 10% of the adult population in China now has diabetes.

Numerous studies have looked at the role magnesium can play in reducing diabetes risk. It’s thought that the mineral can increase insulin sensitivity, which has the potential to lower the risk for developing diabetes.

People who are deficient in magnesium are more likely to develop problems with insulin secretion and production. Adding magnesium to the diet has been shown to reduce the instances of diabetes in rat. Magnesium has also helped diabetics control glucose while helping those without diabetes improve their insulin sensitivity.

Magnesium deficiency may play a big role in determining how severe a woman’s PMS symptoms are. Low levels of magnesium might increase irritability, cramps and headaches during the pre-menstrual period.

A study examined the effects of taking a supplement containing 250 mg of magnesium. After taking the supplement for three months, more than a third of the women reported an improvement in their PMS symptoms.

Dr. Kelly Brogan recommends that her female patients suffering from PMS take anywhere from 5 to 800 mg of magnesium each day. She recommends either magnesium glycinate or taurate for the most effectiveness. Chelated magnesium can also be obtained from food sources, including green vegetables and nuts.

If you regularly suffer from PMS symptoms, magnesium supplementation around that time of the month is just one way to ease symptoms. Dr. Brogan also recommends avoiding substances that can zap your magnesium stores, such as alcohol, sugar and soda.

Magnesium threonate is one of the newest forms of chelated magnesium available. It’s different from other forms in one major way. It can cross the blood brain barrier.

That means it can have a positive effect on brain function. Studies have looked at the effect magnesium threonate can have on Alzheimer’s symptoms and on improving short term and long-term memory.

If you suffer from migraines, you know what a pain they can be. Depending on how bad yours are, you might be out of commission for a few days.

About 10 million people in the US experience migraines. While some people get just one a year, others have them a few times a week.

People who suffer from migraine headaches tend to have lower levels of magnesium in their system than those who don’t. Migraines triggered by a magnesium deficiency are often different from those triggered by another cause.

For example, if your magnesium levels are low, you might notice that your headache feels tight or that you also have cramping. You might feel anxious and be sensitive to loud noises too.

Magnesium glycinate is often recommended to people with migraines. In one study, people who took a magnesium supplement saw their headaches reduced by nearly 42%.

Women who experience migraines and PMS might notice a particularly large benefit to taking magnesium supplements. There’s often a connection between migraines, PMS and magnesium deficiency.

One of the biggest benefits you’ll notice if you add chelated magnesium to your routine is an improvement in sleep quality. Dr. Mark Hyman estimates that increasing magnesium levels fixes a person’s sleeping problems in about 90% of cases. He points out that much of the time, the issue is fixed within just 24 hours.

Your brain is full of GABA receptors. GABA is a neurotransmitter calms your body down. It helps your brain “switch off” for the night and lets you sleep. Magnesium plays a big role in how the GABA receptors work. If you don’t have enough of it, your receptors won’t know when it’s time to work and you end up lying awake through the night.

Dr. Hyman recommends taking up to 400 mg of magnesium, preferably in a chelated form, at bedtime. Most people who start taking magnesium start getting the sleep they need.

I remember being lost in the vitamin aisle once, looking at all the magnesium options available. I didn’t know the difference between chelated magnesium, magnesium oxide and magnesium citrate. It was a total guessing game for me.

Now that I know what the best form of magnesium is and why it helps, I want to help you figure it out too. I hope you got a lot of useful information out of the above list. Please share any thoughts you have about magnesium, or any stories you have about how it’s helped you, in the comments!

can to much Magnesium cause leg contraction or nerve pain?