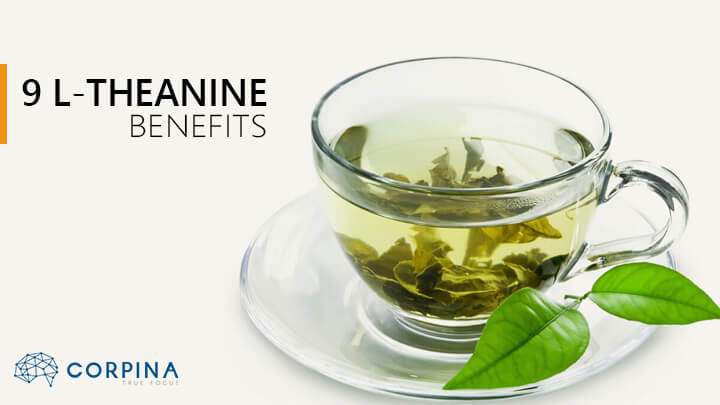 Feeling stressed? Do you think you’ll about to get sick? A cup of green tea may be what you need.

Green tea has the most antioxidants of all the tea varieties and a number of/ other health benefits too.

Many of those benefits come from L-Theanine, an amino acid found in black and green tea. L-Theanine benefits include reducing anxiety, along with improving a number of other problems.

Here are a few other ways L-Theanine can help you.

Numerous studies have linked L-Theanine to weight loss. One study specifically looked at the various compounds in green tea to see what effect they would have on weight loss.

The study involved a group of mice that were given green tea, caffeine, catechins or theanine for a period of 16 weeks. The mice showed a drop in body weight at the end of the trial period.

Additionally, mice given green tea, catechins or theanine had a decrease in their concentrations of triglycerides and non-esterified fatty acids. The study concluded that caffeine and theanine in green tea had a suppressive effect on increasing body weight and fat accumulation.

That sounds great for the mice, but what about people? Studies in humans have shown a similar result.

One study gave a group of men capsules containing green tea extract. The extract contained L-Theanine, but not caffeine. Half of the men took the green tea pills, the other half took a placebo.

Men taking the green tea extract pills saw a reduction in body fat of 1.63% over the course of the study.

Another L-Theanine benefit is boosting your ability to focus. It’s a water soluble amino acid, which means it passes through the blood-brain barrier within half an hour.

The L-Theanine’s effectiveness as a concentration and focus booster are increased when it’s taken in combination with caffeine. In one study, a group of young adults reported improved accuracy when task-switching as well as higher levels of alertness after taking 97 mg L-theanine and 40 mg caffeine.

A similar study involved 16 volunteers. The study participants were either given 100 mg of L-Theanine, 50 mg of caffeine, a combination of the two or a placebo for four days.

The participants who took both L-Theanine and caffeine demonstrated the greatest amount of improvement in behavior and performance at the end of the study.

L-Theanine is very effective at lowering blood pressure that it is often recommended that certain people do not take it or that they avoid drinking green tea. If you have a history of low blood pressure, L-Theanine can make the issue worse.

One study involving L-Theanine and caffeine examined the effects the two ingredients had on the blood pressure levels of people in high-stress situations. Some of the adults in the study had higher increases in blood pressure in response to stress than others.

The participants in the high response group had the best results when taking L-Theanine to reduce blood pressure spikes.

The researchers concluded that L-Theanine “significantly inhibited the blood-pressure increases” in that group, much more than caffeine or the placebo.

L-Theanine can also minimize stress. Taking around 200 mg/day can help improve the way your body responses to stress.

When the body is under stress, it produces glucocorticoids or stress hormones.

These hormones interrupt the production of a variety of brain chemicals, such as dopamine and serotonin. As a result, you feel awful, depressed or even make your brain shrink, decreasing cognitive function.

As one of the few amino acids and supplements that can cross the blood-brain barrier, L-Theanine can naturally block or suppress glucocorticoids.

L-Theanine to Boost Your Immune System

A cup of hot tea isn’t just soothing when you’re feeling under the weather. It also helps you recover quickly, thanks to the immune system boosting benefits of L-Theanine.

When you drink green or black tea, your liver breaks the L-Theanine down into ethylamine. Ethylamine improves the response of the gamma-delta T cell, an essential element in your immune system.

Those delta T cells stimulate your body’s production of interferon, a major chemical in your body’s defense system. The interferon goes to work, fighting against invading viruses, bacteria, and fungi. It can also fight cancer cells.

A study found that the blood cells of people who drank tea (instead of coffee) responded five times more quickly to bacteria and other invaders than the coffee drinkers’ blood cells.

The amount of tea you drink influences the immune system boost you get from L-Theanine. In the study, people drank five cups of tea every day.

L-Theanine can also help reduce the negative effects of alcohol.

When you drink, your liver goes to work. The enzyme alcohol dehydrogenase breaks down the alcohol you drink into acetaldehyde. Acetaldehyde is more toxic than plain old alcohol.

As your body continues to process the booze you drink, acetaldehyde is broken down into acetate by acetaldehyde dehydrogenase and glutathione. The more you drink, the quicker glutathione is depleted and the less able your liver is to handle the influx of alcohol.

While it’s no excuse to go on a bender, L-Theanine can reduce the damage alcohol does to your liver.

The amino acid helps you out by speeding up the breakdown of acetaldehyde. It also helps lessen the effects of a decrease in production of glutathione.

L-Theanine can help prevent a stroke. It can also improve function and healing in people who have experienced a stroke.

In 2009, the journal Stroke published an analysis of nine studies that looked at the connection between tea consumption and stroke. The researchers concluded that drinking at least three cups of tea a day lowered stroke risk by more than 20%.

L-Theanine’s structure is similar to that of glutamate. Glutamate is produced during a stroke and causes a considerable amount of cell damage.

Some older studies have looked at L-Theanine’s role as a glutamate antagonist. That means it can block glutamate and keep it from causing considerable damage to the brain and having it in your system at the time of a stroke can drastically lower the damage done.

Another study showed that people who drank tea cut their stroke risk by 40%.

L-Theanine might have a particular benefit for people who are on the autism spectrum. Often, people with autism display aggressive behavior or seem stressed and anxious.

L-Theanine can have a calming effect on autistic children since it can help regulate glutamates and can help control the behavior of other neurotransmitters. The amino acid won’t cure autism. But it can make it easier for people on the spectrum to navigate their way through life.

The number of people diagnosed with ADHD has increased from 600,000 in 1990 to more than 3.5 million in 2013. Those with ADHD are prescribed drugs that can be effective, but that also have considerable side effects.

Better quality of sleep is also to be expected. One study looked at the effect the amino acid had on improving sleep quality in young boys with the condition.

Evidently, L-Theanine can benefit individuals in many ways aside from reducing anxiety. You might want to try it out to attest its advantages for yourself.

If you’re wondering what the best sources of L-Theanine are, I’d recommend green tea. Gyokuro tea by Yunomi also has higher levels of L-Theanine (about 45 mg per cup) compared to other varieties of tea, like Sencha.

Whether you’re looking to lose weight, improve focus or help a child with autism or ADHD, I’d love to hear how L-Theanine works for you. Please share this article with others and let us know what you think in the comments!