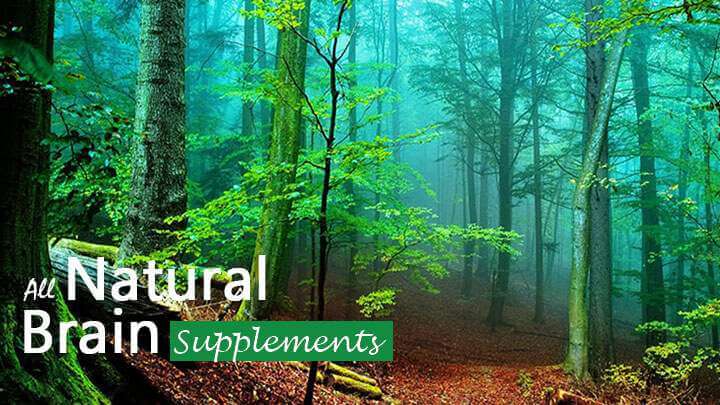 Not every method to quicken your brain has to do with chemicals, gene manipulation or meteorites from outer space! There are several herbs and vitamins right here on Earth that you may have overlooked.

I’m sure that the first mental image you get when people mention nootropics is that it must’ve been created in the lab of a cackling mad-scientist bent on taking over the world.

And this is a problem because people are just not aware of fact and are immediately turned off without any research whatsoever. This is not at all the case, people! There are several beneficial nootropic drugs like Alpha Brain that only contain natural ingredients and have minimal side-effects if dosed correctly.

You get some of them via healthy diet and eating right. But the rest of them, you need to get them into your system from other sources. Don’t be put off though, because I will share all I know with you.

Let’s review a collection of vitamins and other natural supplements that target your brain, and enhance mental focus and concentration. This can be your go-to reference if you are ever in need of a quick look-up on these guys. These are basically the best mental focus supplements available on the market right now.

Stands for Docosahexaenoic acid, an omega-3 essential fatty acid. Or you could just call it DHA, it doesn’t mind, I’m sure. A shocking truth here is that 99% of the human population are omega-3 deficient! That is a huge number to contend with.

I will list out the number of problems DHA can solve. Ready? Starting from simple ones; Memory loss, depression, mood swings and finishing up with major stuff like dementia, Alzheimer’s disease, and attention deficit disorder. Whew, right? The scary part is there could be someone on the highway with the unfortunate combination of the above problems. Don’t be that guy.

DHA is contained in small amounts naturally. Mostly in wild salmon and other forest berries and seeds. One cool thing about DHA is that, when you combine it with Uridine, the combined stack rehabilitates and restores dopamine levels in the brain!

It’s quite impossible to get enough DHA through diet alone… unless you’re a grizzly bear. If so, case in point; you’re a bear who uses the Internet! For the rest of us, supplements are available in stores which can give you your daily quota.

This guy is probably the duct tape of the supplement world. We are constantly finding new uses and benefits!

Ascorbate (vitamin C) is a vital antioxidant molecule in the brain. From quick relief from colds to recovering from immune system deficiencies to preventing cardiovascular diseases and potential therapeutic roles against ischemic stroke, Alzheimer’s disease, Parkinson’s disease and Huntingdon’s disease, vitamin C is the veritable one stop shop. It even improves your skin! Women take note.

Vitamin C is found in abundance all around us. But the catch is that if you want to top yourself off on the good stuff every morning, you might need to chew your way through a small bush. The ideal amount of this that should be part of your daily intake is 500mg. While an average person who isn’t averse to veggies consumes only about 80-90mg every day.

Unless you have really strong molars and a compartmentalized stomach, it would make good sense for you to get supplements and save yourself the trouble. There are several supplements available in stores. Some nootropics capsules also have a balanced amount of all basic vitamins.

If Vitamin C was the duct tape, this would be the electrical insulation tape. Being a natural preventive elixir for most ailments, it also helps improve memory and increase your ability to solve problems.

The best source is the Sun. So unless you’re out for about 3-4 hours every day, this is not gonna work. But realistically speaking most of us don’t get out enough for there to be any meaningful synthesis of this vitamin. Plus, there’s always the risk of sunburn or something even more serious. So, supplements it is.

Ever had a supplement that can help you think faster and get a beach body? L-alpha-glycerylphosphorylcholine or Alpha GPC is one of the best sources of choline, a B complex brain supplement necessary for the development of the brain. Alpha-GPC stimulates a chemical in the brain called Acetylcholine. This chemical is important for developing primary memory and learning functions.

Primary uses of it range from treating various kinds of degenerative diseases like dementia, stroke and Alzheimer’s. It is available to be taken orally or as a shot and also available as a dietary supplement to improve memory.

Bodybuilders also use Alpha GPC supplements to increases hormone levels in the brain promoting bone and muscle, growth and density.

A naturally occurring herb in the Indian subcontinent which is also known as water hyssop. Bacopa Monnieri is a nootropic herb which stimulates cognition and helps reduce stress and anxiety levels in the individual. Testing of this herb was double-blind randomized and placebo controlled so there was no skewing of results. It was found to significantly improve memory retention in about 76 people.

Bacopa supplements like Alpha Brain contain a good amount of Bacopa along with several other ingredients that promote regenerative growth on a cellular level in the brain.

Derived from Chinese Club moss but highly purified to maximize effect, Huperzine is a cognitive enhancer which reduces impairment of the brain due to old age and stress.

Huperzine achieves this by increasing Acetylcholine levels throughout the body. Acetylcholine causes the release of sodium in your body, which allows for muscle contraction, useful for people who work out. Also, it promotes neuroplasticity, which basically means your brain’s ability to adapt, learn and store new information.

There are Huperzine supplements available in the market. Also, natural nootropics like Alpha Brain contain this as one of the primary ingredients.

Carnitine is present at a cellular level in our body. It helps cells produce energy. Carnitine occurs primarily in animal-based foods. ALCAR is a form of carnitine which is available as a supplement.

There are many benefits of carnitine, from treating Alzheimer’s to alcoholism and depression. It eases the pain in the case of HIV drugs and chemotherapy. It also improves blood sugar levels in individuals.

Ginkgo biloba is derived from Ginkgo tree leaves. It improves blood flow to the brain and acts as an antioxidant. Studies have found that in healthy people, ginkgo boosts memory and cognitive speed patterns, while some even show that it can help with memory problems caused by dementia or Alzheimer’s disease. It controls the progression of dementia symptoms.

Since its natural, Ginkgo supplements have no significant side effects. It cures a wide range of ailments. Also, the trees as species are 270 million years old and their medicinal properties have known since 2000 years ago.

As with any kind of supplements, you need to consult your doctor first and make sure that your body is ready for it. Many supplements may interfere if you are already on medication or may have side effects related to you specifically. Also, if you are getting your supplements online, always check for authenticity as they can be easily adulterated and sometimes even be harmful.

I also need to add that regular exercise and healthy nutritious food also contribute greatly to the effect these supplements are going to have on you. So set that clock early, don’t get lazy and eat right!

This is one of the most straight forward posts about brain vitamins I have come across recently. You have explained the things very clearly that it will help in encouraging others to try natural nootropics.

I agree with all 8 on the list but would add one more: ashwaganda. It helps lower cortisol, which indirectly improves cognitive function https://corpina.com/cortisol-lowering-levels-brains-sake/

Hi Dan,
Please let me know if you find a good nutritional therapy for paralysis.