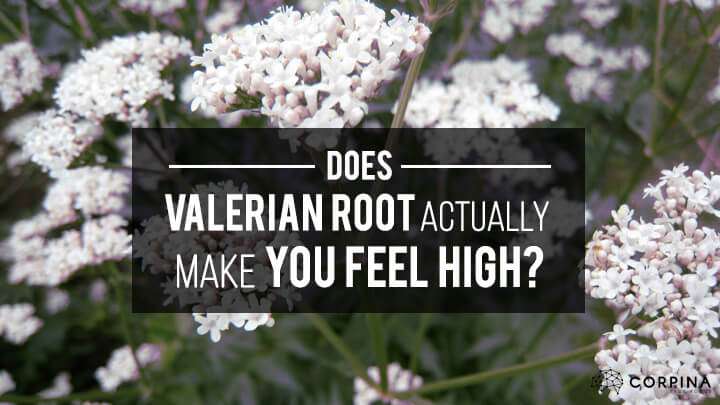 Valerian root is the root of a perennial plant native to Europe and Asia. There are many casual and informal claims on the internet that valerian root can make you “high”.

However, these statements are rather weak and unfounded due to the fact that historically, valerian root has only ever been recorded as causing subtle calming and relaxation effects, and has never been known to alter moods in extreme ways.

How Does Valerian Root Work?

GABA has the ability to lower stress hormones, as well as influence serotonin. So, in theory, the more GABA you have in your brain, the more relaxed and stress free you will be. This is the logic that is often used when one is trying to get a high off of valerian root.

Theoretically, this could make sense, however it is not the case. You have to be careful with both valerian root as well as GABA, because having too much of either will not in fact get you high, but will likely produce some very undesirable side effects.

Large amounts of GABA can cause extreme levels of sedation, which can be dangerous if you need to be driving or operating any sort of heavy machinery. It can also inhibit your ability to go about your day properly.

Too much GABA can also cause a loss of fine movement control, as well as severe depression of the central nervous system activity. Sounds a little bit like getting drunk, doesn’t it?

This is because GABA is most famous for also being the chemical which is can be found in alcohol. Many have also reported experiencing something similar to a hangover the day after consuming a large amount of valerian root.

You shouldn’t experience any problems or negative side effects if you simply want to use some valerian root once in a while to help you sleep. It is completely safe when used as intended or as prescribed. This aids in relaxation and quickly falling asleep, as well as achieving a good quality and restful night’s sleep.

Should you attempt to get a recreational type of high by using valerian root, there are a whole host of other issues you will likely run into.

Large doses of valerian root on its own can cause a loss of both motor and inhibition control. Extremely large doses and/or extended misuse of the root can cause hypersensitivity, nausea, vomiting, and in some rare cases, liver damage. Milder side effects can be an upset stomach or a headache.

It is typically not recommended to use valerian root in any sort of recreational way, as the side effects will likely be unpleasant and uncomfortable. While the side effects are not terribly harmful in most cases, the real concern is the number of other substances and drugs that valerian root will interact with, a lot of them being quite harmful. If you are going to take large amounts of valerian root, and/or you wish to take it regularly for an extended period of time, it would be smart to speak with your doctor first, especially if you are on any other medications.

You should pay special attention to other sedatives, whether prescribed or not. Because valerian root has a calming and restful effect, adding this to another drug intended to induce sleep or relaxation can be dangerous. Not surprisingly, taking valerian root during the day can cause drowsiness, so use with caution during daytime hours, and it is recommended to take it with meals.

Valerian root is broken down by liver enzymes, and should therefore be used with caution in conjunction with other medications being broken down by the same enzymes. Examples of this are antihistamines and some antifungal drugs.

There have also been many personal accounts online, particularly on Erowid that suggest valerian root can cause mild hallucinations, as well as extremely vivid dreams if taken right before going to bed. Some of these reports are from people who took valerian root with something else, but some were a result of valerian root on its own.

This is probably the closest one will get to achieving any sort of high from valerian root, and the vivid dreams could be useful in inducing a lucid dream situation, if one so desires so far.

Valerian root is incredibly useful for aiding in relaxation and sleep.

While not quite scientifically proven, it has also been known to help treat many other conditions such as depression, social anxiety, epilepsy, stress, and attention deficit disorder, to name a few.

However, current studies and other evidence combined with the very long history of valerian root use, show that it is ineffective in getting or feeling “high”. The closest you might come is experiencing some very vivid dreams while asleep or becoming extremely sedated and drowsy.

That being said, most of the time, a large dose of valerian root will only cause uncomfortable side effects and not the desired high.

Despite the many theories linking valerian root to getting or feeling high due to its influence on GABA in the brain, it is not recommended to even attempt it. There are many other substances and drugs that will interact negatively, and even dangerously with valerian root if consumed in large amounts.

The most important thing to remember when dealing with valerian root in larger doses or on any sort of a regular basis, is to speak with your doctor first.

Regardless of whether or not you are on any regular medication, as with anything, valerian root can be dangerous if misused.

I’m using Valerian root to get off of kratom and I love it! If I pop back 3 – 6 grams of the root capsules, I feel like I am sailing.. I have used it before to help me get off kratom before. It is SUCH a wonderful drug. I don’t know what ‘overdosing’ on this miracle substance even looks like – maybe 12 – 20 grams?