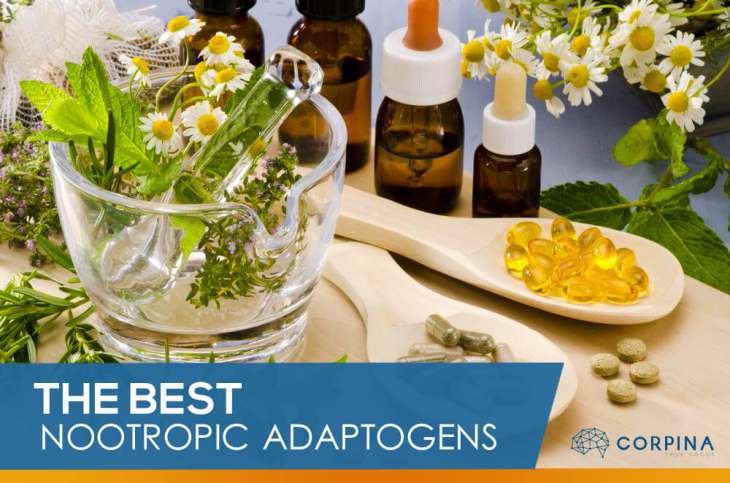 Soviet physician and scientist Nikolai Lazarev coined the word “adaptogen” in 1947. It’s derived from the Latin adaptare (to adjust or adapt).

Adaptogenic compounds were developed to improve performance in athletes, military personnel, and government officials. The Soviets were intent on expanding the working capacity of citizens. And bolstering military strength.

At first, Lazarev investigated lab-made synthetics as adaptogens. Then Dr. Israel Brekhman joined Lazarev, and as a team, began the investigation of botanicals for their adaptogenic capabilities. They started with Panax ginseng. Followed by Siberian ginseng (which was local and easier to get).

So successful was their research that by the 1960’s, the Soviet medical establishment assembled a team of 1,200 adaptogen researchers at the Russian Academy of Sciences. Generating nearly 1,500 trials and studies on adaptogens.

The definition of “adaptogen” includes “metabolic regulators (of a natural origin) which increase the ability of an organism to adapt to environmental factors and to avoid damage from such factors.”

Dr. Corneliu Giurgea, the Romanian psychologist who first coined the term “nootropic” included in his definition, “Protects the brain from chemical and physical toxins”, and “Must be non-toxic to humans, nor stimulate or depress the brain”.

So by definition, adaptogens and nootropics share close similarities in their goal and intent.

Adaptogens help your body and brain ‘adapt’ by upregulating or downregulating some function. Bringing your brain back into homeostasis. Into a balanced, healthy, optimized state.

David Tomen, author of Nootropics Expert, made the observation, “When neurohackers who are new to nootropics initially get over the novelty of experimenting with compounds from the racetam-family. Many begin to experiment with adaptogens”.

The beauty of natural adaptogens is they are often easier to find. Have a longer track record of optimizing the brain (i.e. 1,000’s of years). Are often safer (if dosed correctly).

And some are as effective as prescription medications (for treating things like anxiety and depression).

Adaptogens May be the Ultimate Nootropic Supplements

The mechanism of action for adaptogens include:

The end result depending on the adaptogen chosen for your stack can include better alertness, concentration, focus, learning, memory and mood. And less anxiety or brain fog.

So what are these natural substances that can have such a profound effect on cognition and brain health? We’ve identified the most powerful adaptogens below.

Click through to a more detailed report on each of these nootropics. And consider adding at least one or two to your nootropic stack.

In Sanskrit, Ashwagandha literally means “the smell of a horse”. Which implies this herb provides the vigor and strength of a stallion.

As a nootropic, Ashwagandha helps with anxiety and depression by reducing the stress hormone cortisol. And enhancing GABA receptors and serotonin in the brain.

Ancient Ayurvedic texts talked about Bacopa. It was recommended to devotees to help memorize long passages of text. Today, Bacopa is considered by many to be the best nootropic available.

Bacopa has a significant anxiolytic effect. It appears to modulate brain levels of serotonin which affect mood regulation. The main active components in Bacopa, bacosides A and B improve signaling between neurons. And help rebuild damaged neurons.

Ginkgo is one of the oldest species of trees on earth. This “living fossil” dates back 270 million years. It’s so resilient that four Gingko trees survived the atomic explosion at Hiroshima. Only 1,130 meters from the bombs epicenter.

One study at Liberty University with 262 healthy adults showed that Gingko extract significantly improved verbal and visual recall and memory.

Ginsenosides increase protein synthesis and the activity of neurotransmitters in the brain. And ginseng stimulates the formation of blood vessels which improves blood circulation in the brain. Improving memory and cognitive abilities.

As a nootropic, Ginseng has developed a reputation for boosting physical and mental energy. A healthy alternative to energy drinks, caffeine and prescription stimulants. One study showed a single dose of Ginseng reduced blood glucose levels. And significantly reduced mental fatigue.

Neurohackers report gotu kola is at least as effective – perhaps even more so – in reducing anxiety and relieving stress than Ashwagandha and Phenibut.

Gotu kola is often called “the student herb” in Bali. Because it increases dendrite and axon growth in brain cells which helps memory. It protects against toxins and oxidative stress. And helps eliminate heavy metals and food additives that cause brain fog, mood swings and migraines.

As a nootropic, lemon balm is most commonly used for stress relief, and reduction of panic attacks. Lemon balm also helps with focus, concentration, irritability, depression, and improves memory and learning.

The active component in lemon balm called eugenol is a potent antioxidant. Which acts to boost your body’s natural healing processes by eliminating free radicals that damage brain cells. And Rosmarinic acid in lemon balm provides antidepressant effects by downregulating proteins. Which in turn upregulates BDNF. And boosts dopamine synthesis.

Some say that lemon balm works as well as popping a Xanax. One study in the UK with 18 healthy volunteers showed that lemon balm boosted cognition, and provided a calming effect.

This adaptogen has been used in traditional medicine in Russia and Scandinavia for centuries. In Russia, Rhodiola is widely used as a remedy for fatigue, poor concentration and decreased memory. It’s also believed to make workers more productive.

The Journal of the American Botanical Council reported on 180 studies done on Rhodiola Rosea since 1960. The bulk of the research shows how this herb works in treating physical endurance, fatigue, depression, impotence, infections, fertility, cold and flu, tuberculosis, cancer, and anxiety.

As an adaptogen, L-Theanine increases GABA, serotonin and dopamine levels in your brain. Producing an energizing and calming effect. Improving cognition and memory.

And as an antagonist of NMDA receptors, it inhibits the synaptic release of glutamate. Protecting your brain from over-stimulation caused by glutamate, and possible glutamate toxicity.

A favorite nootropic stack is combining L-Theanine with caffeine for a stimulant effect. Without the jitters commonly associated with coffee or stimulants.

Adaptogen is a relatively recent word created to describe traditional herbal compounds that have been used for millennia to treat a variety of aliments including anxiety, fatigue, stress, or poor memory.

Adaptogens are simply botanicals that work to help bring back balanced functioning of body and brain.

Our bodies can get so out-of-whack in our modern world that when we use an adaptogen to bring back that balance. We may experience a feeling more like a boost to cognitive function. Our brains work better than before. But in reality, they begin working as they were originally designed.

When choosing an adaptogen for your nootropic stack, select a supplement that will help you achieve your intended goal. Do you have low energy, or problems with focus? Maybe poor memory is making life difficult. Or stress is preventing you from enjoying life.

The right adaptogens added to your nootropic stack can help increase the effectiveness of racetams, choline supplements, and others that help boost brain function.

Use adaptogens to help bring that balance. A state that will help you thrive.

Hello, thank you for this website. I’m looking for two types of supplements and/or herbs: ones to boost libido and erectile strength, and others to reduce cortisol. I take an SSRI and struggle with the entire sexual process. I have to continue taking it for my OCD. What do you recommend?