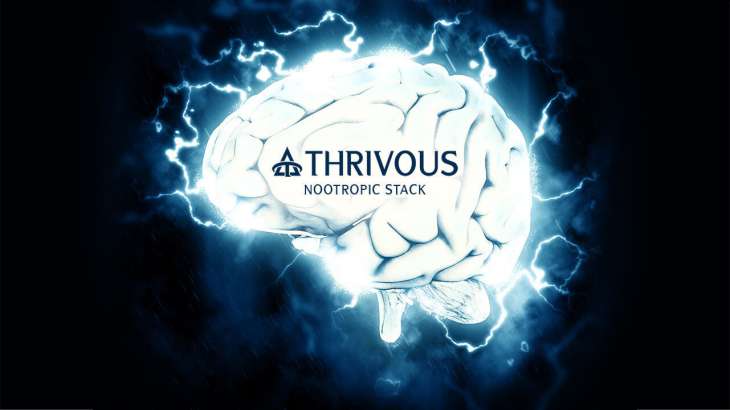 This is my review of three novel, evidence-based nootropic stacks from Thrivous. More and more people have been turned on to the nootropics craze.

We turn to online vendors to expand our minds, enhance our abilities, increase our energy and improve our focus.

But as with everything else, there are snake oil salesmen at the ready to barge into a burgeoning industry and rip people off.

One of the most common problems facing the nootropic community is the rash of shady vendors who pay no attention to the science behind their products.

These companies prey upon poor souls just looking to improve their health and better their minds by offering untested products with bogus labels.

Enter Thrivous, a company that strives for superior scientific quality.

Positioning themselves as a worthy alternative to Qualia, another company known for their attention to cutting edge science and quality control, Thrivous seeks to rise to the challenge set by the consumer by providing exceptional cognitive enhancement and top of the line supplements.

As they say on their About page, “Our mission is to help you access technology with the greatest potential to improve your brain and body.

To that end, we combine sustainable business, consensus science and emerging technology into products and services that you’ll love.”

The name Thrivous is emblematic of their agenda—they want to help their customers to thrive.

To achieve this, Thrivous is not only dedicated to selling quality nootropics, they are also taking things one step further by developing geroprotectors, supplements that are poised to revolutionize the anti-aging movement.

Here we will look at their product line and services to get a better understanding of where they stand vis-a-vis other popular nootropic vendors.

We will see what the public has said about the company and how their price points compare to competitors.

ALPHA Extended Daily Nootropic is said to be a long-term brain function supplement. Each 120 capsule bottle sells for $30 ($40 without a subscription). The one unusual factor about this particular supplement is the label’s recommended dosage.

The bottle says to take four to eight capsules one to two times daily for a total of four to sixteen pills daily. Now I’m no expert, but sixteen of anything seems rather excessive.

Despite the iffy dosage requirements, ALPHA appears to contain all of the top shelf cognitive boosters one could ask for from ALCAR and Alpha-GPC to Alpha-Lipoic Acid and Ginkgo Biloba extract.

ALCAR is often used to treat ADHD and has been embraced by the bodybuilding community for its ability to enhance performance and endurance. It has been shown to help supply the brain with energy and improve activity in the mitochondrian, the human brain cell’s energy generator.

Alpha-GPC is one of the most popular nootropics on the market, a phospholipid form of choline that acts as a precursor to the neurotransmitter acetylcholine.

Alpha-GPC is renowned for increasing brain power, assisting in learning abilities, improving memory and reversing cognitive decline in those suffering from Alzheimer’s disease.

Alpha-Lipoic Acid is an antioxidant that reduces oxidative stress in the body. It has been found to be beneficial to combating diabetes and insulin sensitivity.

Clarity is a proprietary blend designed to improve mood, focus and memory as well as cognitive support.

Some of these ingredients are nothing special, they can be purchased individually in any pharmacy across the country.

But Thrivous makes a strong case for the importance of B Complex and Zinc in supporting healthy cognition.

And Lincoln Cannon called my attention to Sulbutiamine, which may reach the brain better than other B1 vitamers; Riboflavin-5-Phosphate, which is a B2 vitamer that may protect against migraine; L-5-Methyltetrahydrofolate, which may be more bioavailable with less risk of adverse effects than other B9 vitamers; and Adenosylcobalamin and Methylcobalamin, which are B12 vitamers that may be most bioavailable when supplemented in combination.

Clarity provides a rare combination of B vitamers.

The most notable ingredients in Clarity are Bacopa Monnieri and Rhodiola Rosea, two powerful nootropics that have been used in ancient medicine for longer than we know.

Bacopa Monnieri is known for being an all-natural stress reliever that can also substantially improve memory and assist people in adapting to new situations.

Rhodiola Rosea, on the other hand, is considered to be “the golden root.” It works to enhance energy and boost brain power.

It has also been espoused by athletes and bodybuilders for its ability to help burn fat during workouts. What’s more, it has been shown to significantly improve symptoms of depression.

As with ALPHA, Clarity retails for $30 ($40 without a subscription).

I asked Lincoln Cannon about the price. He said, “We charge a somewhat higher price for one-time purchases in order to subsidize our subscribing customers, who receive 25% or larger discounts on all our products.

On top of that, we provide free shipping on all orders in the USA, and discounted shipping internationally. So, for example, a subscription to Clarity actually costs less than $25 per month, excluding shipping value.

I believe that makes Clarity the most valuable nootropic stack on the market anywhere in the world.

Serenity is a nightly nootropic that is said to induce calm, improve sleep and provide next-day focus. This one sells for just $15 ($20 without a subscription).

Serenity contains the following ingredients: L-Theanine, Magnesium and Melatonin. A bottle of any one of these products would sell for $10 to $15 on their own. Together, you’d be looking at somewhere between $30 and $45.

Finally, we have Surge, which is Thrivous’ “acute nootropic,” an open-source stack for energy and focus.

This one hardly seems unique, as it is nothing more than Caffeine, L-Theanine and Panax Ginseng. It’s essentially Smart Caffeine + Ginseng.

That said, L-Theanine has its cognitive enhancement benefits and Ginseng has a reputation for relieving fatigue, and together with caffeine, it makes up one of my favorite stacks.

It appears that Surge is Thrivous’ attempt at spicing up the long-adored Caffeine+L-theanine stack, with a twist. I will definitely be trying this out more, at the gym and out at the bar.

Thrivous as a Company

As far as product line, that’s all she wrote. The only other thing they offer are stacks that combine the products listed above.

Their FAQ page is pretty thorough in terms of questions customers might have about their orders, showing me that they are laying the groundwork for a strong and long-lasting product line.

Their News section is, perhaps, one of the most attractive things about the Thrivous site, offering transparency about their staff, news about new doctors joining their team and press releases about their product line.

What Are People Saying?

And they have been reviewed favorably by several nootropic websites and they do not appear to sell through consumer sites like Amazon.

It’s safe to believe that the combination of dosages and prices that Thrivous provides makes their products by far one of the greatest overall value on the market anywhere in the world.

In its formulations, Thrivous has focused on evidence-based dosages reflecting those demonstrating efficacy in clinical studies on humans.

And they price their products far below the prices charged by most stack vendors and competitively with the sum of prices charged for individually-encapsulated ingredients.

On top of that, they test all of their ingredients, both individually and in combination, multiple times to ensure their quality. Most of all, they make all of the test results publicly available on the product webpages.

So, in addition to getting high value products, Thrivous customers are getting high quality products. Sometimes you really can get the best of both worlds.

Other nootropic vendors I have tested

Duckdose Review and Comparison to ModafinilCat

Modafinil XL Review: Is This the Best Site to Buy Nootropics?

What Happened To Powder City? The Full Story

4F-MPH From Chemical Story (My Review)

Vitamonk Review: Finally, A Nootropics Company That Gets It

HVMN (Nootrobox) Review: Do They Live Up To The Hype?

How To Buy Modafinil From ModafinilCat (Complete Review)

A Review of ModafinilWorld, Yet Another Modafinil Supplier

Hi Corpina. Thanks for reviewing Thrivous! Here’s some additional info regarding a couple points you mentioned.

You mentioned concern about the Alpha dosage recommendations. If you take a look at the clinical studies related to its ingredients, you’ll find that Alpha dosage recommendations match those used in the clinical studies on humans. Most consumer products substantially underdose these ingredients, or do not formulate their ingredients in proportional dosages that enable users to scale up to full clinical dosages. Alpha solves those problems.

You also mentioned that our prices are “somewhat reasonable”. I agree that’s a fair assessment of our one-time purchase prices. That’s intentional, to subsidize our frequent customers, who pay subscription prices that we discount by 25% to 30%. On top of that, we provide free shipping on all orders in the USA, and discounted shipping internationally. So, for example, a subscription to Clarity actually costs less than $25 per month, excluding shipping value.

Thanks again for your time! Happy to answer any questions that may come up.

Great points all around, thanks for the thoughtful comment, Lincoln. 🙂

Hi Corpina. Since the time of your review, Thrivous has released new formulas for some of its nootropics, as well as a line of geroprotectors that might interest you. Thanks again for reviewing Thrivous!