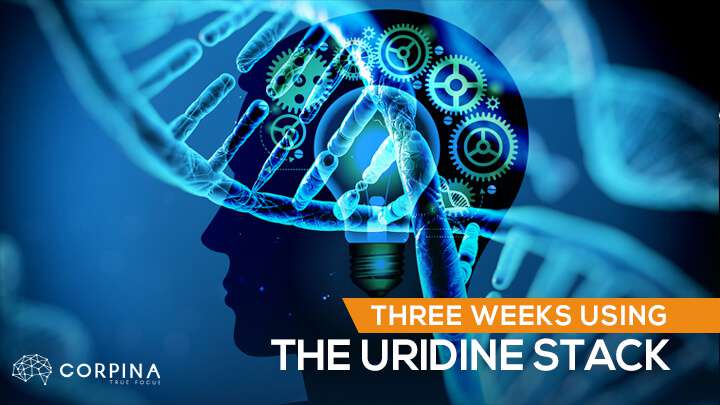 A few months ago, we did a comprehensive report on the Uridine stack – a supplemental regimen designed to restore and maintain nerve health as well as to normalize response to dopamine.

The Uridine stack contains ingredients that were assembled by Longecity.com member Mr. Happy over a period of several weeks.

At the core of the stack is the nucleoside uridine which can be obtained in three different supplemental forms as well as in nature, although the former method is far more convenient.

The next important member is Docosahexaenoic acid (DHA) which is found in fish oil.  Vegetarians can use flaxseed oil as an alternative to fish oil, but providing alpha- Linolenic acid (ALA) instead.

A choline supplement should be taken to work with the DHA/ALA in maintaining nervous system health.

Other necessary components are vitamins B9 (folid acid) and B12 (cobalamins), which serve as cofactors in the efficacy of the uridine itself.  Optionally, one may choose to add vitamin E and magnesium, which are both very helpful for general nerve health and seeing benefits quicker.

Naturally, everybody here at Corpina was extremely excited to give this stack a try, so we decided to take it for three weeks to observe any changes in our moods or cognition.

Three weeks is a good trial period since the estimated time for any noticeable changes to appear is about seven to ten days, plus I added in approximately two more weeks to further judge it.

As the author of the original uridine article here, I was the first person to give it a shot at Corpina Nootropics.  I was sent the recommended uridine product (uridine monophosphate) in the mail and I purchased a potent DHA product (Kalamari oil, with about a 3:1 ratio of DHA to EPA).

During the first few days I used the fizzy nutritional drink “Emergen-C” as my source of B12 and a small supply of folate tablets and vitamin E capsules I happened to have laying around.

Choline supplements are not supposed to be added to the stack until about two weeks, and gradually worked up in dosage due to their strong, nearly immediate effects on brain chemistry.

I have a sensitivity to choline supplements, along with a subset of nootropics users, which involves depression with excessive choline intake.  Therefore, I will be using Acetyl L-Carnitine as a substitute after two weeks.

Taking this stack is extremely easy – it doesn’t require any manual encapsulation or other hassle.  I simply swallow my vitamin pills and take the uridine sublingually.

After extracting a level scoop (250mg) of uridine powder from its container, I dump it directly underneath my tongue after swallowing any saliva in my mouth.

This makes it so the uridine powder stays under my tongue and doesn’t instantly get washed away.  The powder tastes slightly salty, with a subtle umami flavor – it’s not unpleasant.

The first few days I took the stack, I didn’t expect much.  It takes a solid week or so before you “feel” anything, as I mentioned above.

During this initial break-in period, I decided to take 250mg of uridine twice a day, as Mr. Happy recommends on his Longecity thread.

The first dose was taken in the morning right after waking up and going to work, and the second dose was taken at bedtime along with the vitamins.  I took the DHA with meals for optimal absorption.

Something I found with taking the uridine in the morning was a slight sedative feeling, like sleepy.  This is something that some of the other forum members have noted – and some of them have switched to taking it only at night.

Unsurprisingly, a study found that uridine may promote the onset of sleep, especially at higher doses.  Of course, only some people have noticed this, and it is dose-dependent.  I am taking my uridine sublingually, which increases potency about sevenfold compared to just swallowing it.

I decided to stop taking uridine in the morning due to the mild sleepiness, although I decided I would try twice-daily dosing again later once I had my sleep schedule a bit more stable to begin with.

I also received a bottle of vitamin B complex in the mail to replace the sources I had at the time.

At this point, I also ran out of vitamin E capsules, so those needed to be restocked.  Around day 6, I noticed a slight boost in motivation and lessened procrastination, although the consistency of this effect remained to be seen.

Alas, I made the mistake of purchasing a B complex containing a small amount (50mg) of choline bitartrate, thinking the effects would be negligible.

Around day 8 I experienced emotional instability throughout the day, leading me to ditch the B complex and purchase my vitamin B12 as a separate pill, as I did with the folate.

After resuming using the regular vitamin tablets due to my known problem with choline, I went about my usual routine taking the uridine stack nightly.

I still felt the slight motivational boost that emerged the couple days before, but now I had a slight perceived boost in overall cognition as well.  Difficult programming problems seemed a bit easier, and I felt I was more in tune with my body at the gym.

Some activities became more enjoyable as well, such as listening to music or even reading.  It may be possible that the regimen was helping my body restore nutrients critical to my nervous system that I had been lacking.

In any case, I will continue to wait and watch what happens – the effects are still mild but welcomed.

Because of a busy schedule, I missed two days of uridine dosing on the 15th and 16th days.  However, the positive effects from before continued and perhaps became a little stronger.

Notably, on the 20th day (yesterday from the time this was written) I noticed that my motivation and focus had been very good – perhaps to the point where I didn’t even notice the “effect” because I was just so on-task.  Mood effects remained the same.  They are still mild but much welcomed.

At this point, I will add the vitamin E and magnesium back in as soon as I can get them delivered (I use specific products).

While I do like the effects the uridine stack has had on me so far, I would like to see a moderate (as opposed to mild) mood improvement as well as an increased perception of energy.

Sometimes I will feel motivated, but not necessarily energetic enough to complete tasks.  So for now, we will let these uridine stack trials continue and I will be back in a few weeks to report my findings!

Overall, the uridine stack provides benefits that are mild but thoroughly enjoyable. Better yet, it appears to be very consistent and reliable.

During the past two weeks since I started noticing the increase in motivation and sense of well being, the effects appeared without fail and without a reduction in strength.

Since the stack serves to regulate the brain rather than directly provide stimulation, it feels very smooth and natural; without any uncomfortable side effects.

To those of you who are very cautious about supplements and safety, this is a great choice.

As a person who finds that many supplements on the market “don’t work” or even have negative effects, I believe that the uridine stack will be a permanent addition to my daily routine.

If you haven’t yet, please check out the original uridine stack article and the thread from which it originated.

Both have a lot of details for components and dosing, which are necessary if you want to try this yourself.

Uridine works on GABA receptors too, like benzodiazepines and alcohol, hence the sleepiness…

Fixed. Thank you for pointing that out, Tony!

I use this stack with an Ethyl EPA fish oil 90% rather than the DHA , this I find increases mood way better

Please tell me how much uridine in teas measurement

Dont fuckin wright about shit like this!!! This stack fucks up more people than it works on!
There is no single study it rebuilds dopmine receptors!!
Jusy google and see on Reddt And Longecity how many people you fucked up with this stack!
Almost me too! And

Can you elaborate more on what happened? I can’t find anywhere anyone complaining to this extent about it.