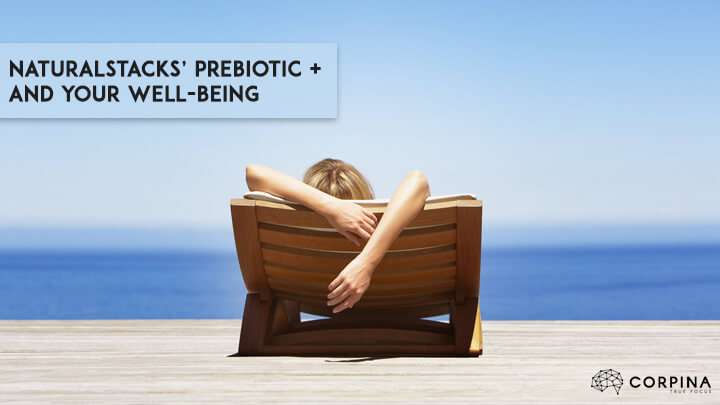 This is a review of Prebiotic+, a resistant starch complex which aims to provide many health benefits including better sleep quality and mood.

The product is sold by Natural Stacks, the first company to sell the CILTEP stack commercially and now the provider of many other nootropics and supplements for a better well-being.

One of the popular, scientifically-supported new dietary trends is the consumption of resistant starch, which aims to provide sustenance to bacteria within a person’s body. Specifically, for the ones that live within the human gut and are considered beneficial to their hosts.

Providing a resistant starch meal to friendly intestinal microorganisms is a great service to your body. Feeding them does not only crowd out harmful bacteria, but it also enables them to produce chemicals such as short-chain fatty acids and butyrate, which encourage good health.These starches can also be referred as prebiotics, as opposed to probiotics, which are products that contain the good bacteria themselves.

Of course, I set out on the internet to try a resistant starch product to personally test the potential of prebiotics, and I came across a familiar name – Natural Stacks.

They were the first company to offer a commercialized CILTEP stack, and they have since expanded their inventory to include other supplements.

So here I am today, with a review of Natural Stack’s very own resistant starch complex – Prebiotic+!

So, right off the bat, I’ll go ahead and say that Prebiotic+ is a little bit more than a simple resistant starch product.

It contains a couple extra goodies which help warrant its position as a higher-end product. That being said, it’s simply an enhanced prebiotic, as its name implies.

First, I’ll outline the ingredients in Prebiotic+ and explain which components are intended to do what. Next, I’ll delve into the benefits derived from Natural Stacks’ formula, mainly focusing on the resistant starch mixture itself.

Finally, I’ll give you my personal experience on the product, and explain why you may or may not want to try it yourself.

The two starches serve as the base of the complex, and are responsible for its main benefits.

Green banana starch is what’s called a type 2 resistant starch, which is found in nature and indigestible to humans.

Heating this type of starch converts it to a digestible version that is no longer considered a resistant starch.

Raw potato starch can be either resistant starch type 2 or type 3 – the latter being a kind that forms after cooking then cooling a starch.

The concept of re-cooling the starch to gain a resistant version is why cold potatoes can make a healthy meal for those looking to cut calories in their diet.

Both starches in Natural Stacks’ Prebiotic+ serve a similar purpose. They may not be digestible by human functions alone, but they make a tasty snack to beneficial bacteria. We’ll soon get to why this is desirable.

Inulin-FOS is a combination of the chemicals inulin and fructooligosaccharide, which are both low glycemic index sweeteners extracted from chicory.

Inulin specifically is a fiber that aids in digestion, and the compound as a whole can feed intestinal bacteria.

However, the bacterial sustenance is not as targeted towards specifically good bacteria, which is why it is best combined with ample amounts of resistant starches.

Trehalose is a disaccharide that is readily broken down to glucose in the human body, and an agent known for a gelling effect within cells, providing a sort of stabilization during local dehydration.

There is some evidence that trehalose has antidepressant effects and can prevent fructose from entering the liver, which could help treat fatty liver disease.

Finally, we have cinnamon, which is a spice that originates from the bark of the many types of cinnamon trees in southeast Asia. It is claimed to have blood-sugar stabilizing effects, and it imparts a mild but pleasant flavor to Prebiotic+ when consumed. I enjoy this part, especially!

Now that we are aware of exactly what we’re ingesting, let’s go over the benefits we should get out of taking Prebiotic+.

So here’s the big deal with resistant starch.

Prebiotic+ contains resistant starch types 1, 2, and 3. When you ingest these types of starches, most of the carbohydrates are not digested nor used by your body.

In fact, Prebiotic+ provides only 92 calories per serving, which is a small number considering the 23.4 grams of carbohydrates per serving.

Instead, the energy is uptaken by probiotic bacteria that are already in the lining of your small intestine. This action has been shown to have a number of positive effects that of course, mostly occur with the gut.

First of all, you can improve the health of your colon. According to the British Nutrition Foundation, there is a noted increase in regularity and a lowering of pH with a higher intake of resistant starch.

Certain areas of the body, including the reproductive tract in women, can benefit from the more acidic environment starting from the intestines.

Moreover, your digestive system as a whole benefits from gaining bacterial by-products as their own nourishment.

The fermentation done by probiotic bacteria produce short-chain fatty acids, which are absorbed and used as a food source by epithelial cells in the intestines and liver.

A particular short-chain fatty acid called butyric acid is known to have epigenetic effects – effectively switching certain genes in our cells on and off.

In this case, factors are altered so that an overactive immune system is suppressed, leading to reduced bodily inflammation.

Resistant starch could even be considered in a nootropic in its own right, due to the significant neuroprotection offered by epigenetic effects from butyric acid.

Even the foods you currently eat will have different effects on your body when combined with increased resistant starch intake.

A recent scientific review showed that when combined with resistant starch in the diet, ordinary starches have less of a glycemic load on the human body.

This can help stabilize your blood sugar throughout the day, and could be especially useful to those suffering from type 2 diabetes.

Needless to say, the amount of potential effects with Prebiotic+ are staggering. Since the product interacts with the gut, where all of our nutrients are absorbed, there is a lot of potential for system-wide effects.

The most well-known potential side effect involved with using a product such as prebiotic+ is bloating and gas, which is typical when consuming resistant starch. This can be avoided by taking a lower dose of the product.

In fact, Natural Stacks advises that when starting a daily regimen of prebiotic+, to use half a scoop for the first week, to allow your body to adjust to the accelerated growth and activity of probiotic bacteria.

Another quite interesting side effect is vivid dreaming, because the resistant starch causes an increased production of melatonin in the gut.

To some people, this might be viewed as an exciting benefit, but others, including my colleague, reported unsettling dreams while using Prebiotic+.

This can clearly vary from person to person, so it’s just a thing to point out.

Another precaution to consider:

This product might not be suitable to people with very unfavorable balance of good to bad bacteria. This is because there are ingredients such as Inulin-FOS which feed ALL bacteria, not just the savory ones.

In this case, they might want to try pure potato or green banana starches along with a solid prebiotic bacteria regiment. After a favorable bacterial balance is achieved, perhaps, that is a good time to try Natural Stacks’ Prebiotic+.

My Personal Experience with Prebiotic+

Now that we’ve covered all of the facts regarding the formula and benefits of Prebiotic+, I wanted to share my experience of using the product over the course of about a month.

When I first received my package from Natural Stacks, I wasn’t sure what to expect. Maybe it would end up impressing me, but I did not expect to notice much of anything. How could consuming a scoop full of “different” starch make a difference in my life?

Opening the jar of Prebiotic+ immediately pleased me, however. The powder mixture gave off a mild, familiar cinnamon aroma. Appetizing indeed, especially for a product geared towards a purely health-oriented purpose.

I devised a method of consuming the powder that I thought was better than Natural Stacks’ recommendation – which is to dissolve it in 4-6 ounces of cold water. Instead, I used about 8oz of almond milk and mixed the solution using my ever-handy blender bottle.

This gave me a sweet, cinnamon-y drink that I certainly don’t mind imbibing daily. My only real complaint is the grainy texture, but that’s really something I expect with most liquid supplements.

Natural Stacks advises that you take Prebiotic+ in the evening, and I truly understand why. It seems that the bacterial fermentation from the resistant starch aids with falling asleep, thanks to the melatonin produced.

In addition, I can attest that I have had vivid dreams almost every night I’ve taken Prebiotic+. Other anecdotal reports I have read were not wrong.

I wouldn’t say the dreams were lucid, but the sensory experience was detailed. I could clearly remember colors, sounds, and feelings from the dreams for a long time after waking up. The dreaming alone was quite interesting, but I was also interested in the digestive effects.

Since I started using this resistant starch regimen, I have felt “fuller” each evening. Even after taking brief breaks of using the product, I feel like I need to eat less dinner to feel satisfied.

I do experience the side effect of bloating ever so slightly, which may contribute to this. Besides this, I cannot honestly say I “feel” any bodily effects.

This could be considered a good thing, since I believe I started off with a good set of gut flora due to my low weight and regular digestion.

However, I do want to mention that my overall mood has been uplifted since beginning this experiment. I feel as if there must be an enhancement of neurotransmitter production, or my energy level have slightly been lifted perhaps due to a better gut environment.

I can’t be sure, but I think the Prebiotic+ has acted as a nootropic somewhere in the background for me.

Overall, I’m pleased with the mild benefits I’m experiencing with Prebiotic+, and would certainly continue using it.

Prebiotic+ from Natural Stacks is a great combination of healthy resistant starches as well as synergistic side ingredients.

It has helped to subtly lift my mood, and I trust that with my gut flora well-maintained, my overall health should improve with regular use of the product. The taste of the powder was also pleasant, and helped to encourage the experimentation process.

Natural Stacks is a company dedicated to “optimal performance for everyone”. Founded by a duo known as Roy and Ben, they believe that supplements should have quality and true power behind them, not just marketing hype.

Check out Prebiotic+, CILTEP, and other great products at NaturalStacks.