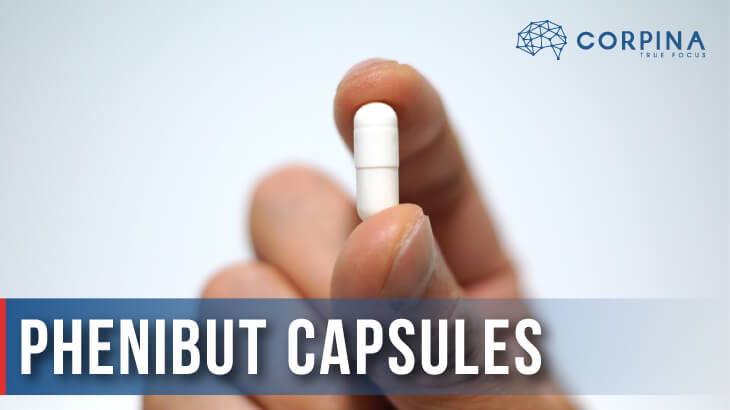 Phenibut, referred to in Men’s Health magazine as the “Happy Drug,” is used as a treatment for disorders affecting our mood and overall sense of well-being, as a palliative for alcohol withdrawal, and as a nootropic (a drug used to enhance memory and other cognitive functions), among other issues. In larger doses, taking phenibut for sleep has been shown to help people with insomnia get to sleep faster and stay asleep longer.

In this article, I am going to focus on some Phenibut basics, and Phenibut capsules info. If you’d like more detailed information about Phenibut, its pros and cons, and its potential side effects, please see this article instead.

Phenibut is a non-prescription supplement, originally developed by the Soviet Union and used by Russian cosmonauts to help them stay calm and improve their cognitive function in stressful situations. Still prescribed in Russia as a treatment for neurological and psychiatric disorders, phenibut capsules are sold in a variety of locations in the United States. Phenibut is structurally similar to the neurotransmitter gamma-amino butyric acid (GABA). But where GABA is produced naturally by the body, phenibut is manufactured with an added phenyl ring, and is used as both a recreational and medicinal drug.

The National Institutes of Health (NIH) explains that the psychopharmacological effects of phenibut are “similar to that of baclofen,” a medication used to treat muscle spasms. Because of its extra phenyl ring, phenibut (unlike GABA, its naturally produced analog) passes easily through the blood-brain barrier, where it binds with dopamine receptors and the GABA-B receptor. Importantly, because it passes through the blood-brain barrier, some of its effects (and side effects) are different than those of GABA.

Phenibut has a broad range of uses that fall into several categories.

As an anxiety reducer, phenibut has been used to treat both stress and anxiety disorders. These range from mild social anxiety to severe cases of post-traumatic stress disorder. When taking phenibut for anxiety, it’s also been shown to promote restful sleep in people suffering from insomnia.

Perhaps because of its similarity to baclofen (the medicine used to treat muscle spasms), phenibut has been used to treat vestibular disorders – problems with balance – such as vertigo.

Phenibut is also used to ameliorate symptoms of alcohol withdrawal. Because both alcohol and phenibut stimulate GABA-B receptors, phenibut can be used to help people break their addiction to alcohol. A word of caution here though, phenibut can itself be addictive. Perhaps especially when taken for alcohol dependence, it’s important to follow a strict dosing regimen when taking phenibut.

Health and fitness is another area in which phenibut has a strong following. Bodybuilders and weightlifters use it as a nutritional supplement, believing that it promotes the human growth hormone (HGH). For example, a Bayesian Bodybuilding article discusses a study on male weightlifters which found that GABA supplements “increased resting growth hormones” by 375 percent. The post-exercise growth hormone concentration of weight lifters participating in the study increased by 175 percent. It should be noted that other studies have been done on phenibut’s effects on athletes, and have failed to reproduce these results.

Side effects, withdrawal symptoms and addiction

Phenibut has some side effects and potential withdrawal symptoms, like any other over-the-counter or prescription substance on the market. Potential negative side effects include nausea, fatigue and possible stomach cramps. If taken for too long at too strong a dose, it is possible to become addicted to phenibut. If that should happen, withdrawal symptoms may include nausea, vomiting, anxiety or feelings of nervousness, and loss of appetite.

For people who abuse alcohol, there is a greater potential for phenibut addiction or dependence, as well as other issues. Researchers reported on one case where a binge-drinking 21-year-old was in the habit of mixing phenibut powder into his alcoholic drinks. When he then presented at a local hospital emergency department, he was seen to experience hallucinations and overwhelming anxiety. The hospital discharged him after five days of treatment that included a baclofen taper. The man reportedly no longer mixes phenibut and alcohol.

While mixing powder in drinks is a great way to avoid phenibut’s acrid taste, let this be a cautionary tale not to mix it in your alcoholic drinks! Phenibut should never be mixed with another anti-depression medication. Doing so puts you at risk for respiratory depression, unconsciousness or even death. Do not mix it with benzodiazepines such as Xanax.

You can get Phenibut in powder and capsules. Both the capsules and powder forms of the supplement have a large following on social media sites such as reddit and Facebook.

Find the capsules in both the standard gelatin type and in vegan form. The standard dose for phenibut is 250 to 500 milligrams (mgs), taken one to three times daily and no more than two days a week.

When you take the standard dosage, you typically feel the effects for five to six hours. If you take a higher dose of 500 to 750 mgs, you still get the mood lift and calming effects of the lower dose, along with possible feelings of increased sociability and healthier sleep. The pills typically come in bottles of 60 to 70 capsules. Some online sites sell larger quantities of 90 to 120 capsules per bottle.

Choosing phenibut powder or capsules is a personal preference. Both have pros and cons – see below.

Phenibut powder comes in jars that range between 5 and 250 grams. Taking the supplement as a powder allows a person to feel the effects of the supplement faster and measure out a more precise dose than the capsules allow.

Some phenibut users find that the cost of the powder is overall less expensive than the capsules.

Where to buy high quality phenibut capsules (and powder)

Do not expect to go to the local grocery store, or the health and beauty department in the nearest big box store, and find phenibut there. Stores such as GNC no longer sell phenibut, though several online sites still do. Before you buy, be sure to check for discounts and special offers from these sites:

Whether you choose phenibut powder or capsules, you have the opportunity to reap the benefits, experience the potential euphoric feelings attributed to a “phenibut high”, and feel more energetic.

What do you like better – powder or capsules, and why? Lmk in the comments.