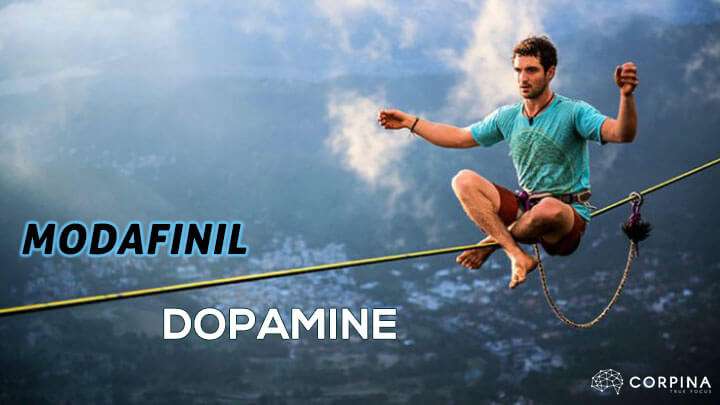 How does Modafinil affect dopamine, the neurotransmitter that underpins reward?

This is actually a controversial question, partly because Modafinil’s mechanism has been shrouded in mystery until the last decade.

Returning to the question of how Modafinil affects dopamine:

What’s at stake in this discussion?

If Modafinil works by increasing dopamine, than it behaves more similarly to drugs like Adderall than we first thought.

But if Modafinil’s effect on dopamine isn’t clinically significant and other targets in the brain are more important, in that case Modafinil can truly be said to be a novel cognitive enhancer.

The evidence right now favors a hybrid few. Namely, that Modafinil does augment dopaminergic signaling, but to a lesser extent than primary dopamine reuptake inhibitors like Ritalin.

But in addition to this dopaminergic effect, Modafinil works on a number of neural circuits. It’s this blend of biological activity in the brain that makes Modafinil such a perfect candidate for a cognitive enhancer.

Ultimately, evidence favors the notion that Modafinil hits the sweet spot in terms of dopamine.

Modafinil vs Other Wakefulness Enhancers

If you’re unfamiliar, Modafinil is a wakefulness enhancer that’s used clinically to treat disorders that make you sleepy during the day. Conditions like narcolepsy or sleep apnea.

The idea is that sleepiness can be counteracted with a wakefulness enhancer like Modafinil, even if Modafinil isn’t really addressing the underlying disease process.

Modafinil is the first drug of its kind. There’s some promising evidence that it enhances cognitive function, even in healthy volunteers.

One point of contention is whether this effect is restricted to individuals with low baseline performance. More research is needed to definitively answer these questions.

It’s also likely that how Modafinil affects performance depends on the type of tasks used in the study.

On the whole, it’s much harder to boost performance for highly complex tasks that require a great deal of connectivity between disparate brain regions.

Modafinil also has a safer side effect profile compared with drugs like Adderall.

Adderall is a catecholamine releasing agent that crudely promotes dopamine release into the synaptic cleft. (This space is the just a gap that neurotransmitters must diffuse across to propagate a signal from a dendrite to a different neuronal cell body).

By contrast, Modafinil lacks the side effects that arise from overstimulating the sympathetic, fight-or-flight arm of the nervous system.

What Exactly Is Modafinil Doing in Your Brain?

There’s over fifty years of research that’s been conducted on amphetamines and amphetamine-derivatives. So these drugs are thoroughly understood.

Here’s a quick anecdote: both John F. Kennedy and Hitler were both medicated with amphetamine (actually, methamphetamine) during their political career.

Modafinil’s mechanism is less well understood. The beneficial effects of Modafinil on cognitive performance aren’t as cut and drug as other drugs.

It’s easy to describe the pharmacology of so many other drugs. Strattera is a selective norepinephrine reuptake inhibitor. Nicotine is nicotinic acetylcholine receptor agonist.

But Modafinil is pleiotropic. Meaning, it modulates a bunch of different neural circuits and neurotransmitter systems.

Dopamine is that neurotransmitter that makes life itself rewarding.

That feeling of accomplishment you get from completing a project or even doing something small like turning the page of a book your reading? That hinges on dopamine release.

It’s no wonder that amphetamines (which are extremely potent dopamine-releasing agents) make it easier to complete mundane tasks. More dopamine is released and so you experience these boring chores as more rewarding. This phenomenon is called “task salience.”

There’s a dark side to dopamine, too. In addition to being the “happiness molecule”, it also underpins addiction.  Dopamine is the common thread underlying everything from pornography addiction to gambling to drugs of abuse like cocaine.

Even the addictive potential of opioids (like oxycontin), which are considered relatively selective for the opioid receptors in the brain, arises In part from eliciting dopamine release downstream.

Dopamine can also be neurotoxin in some circumstances.

Well dopamine can autoxidize to form 6-hydroxydopamine (6-OHDA) in vivo (in your body). 6-OHDA is a toxin that damages dopaminergic neurons – these are the brain cells that do all the hard work of synthesizing dopamine from L-DOPA and packaging it into vesicles, primed for release.

Since amphetamines increase dopamine release, more dopamine hangs around and is available for conversion to the neurotoxin 6-OHDA.

Modafinil does have a weak affinity for the dopamine transporter (DAT). DAT pumps dopamine from outside the cell back into the cytoplasm. Inhibiting this process will cause dopamine to accumulate in the synapse, and continue to stimulate dopamine receptors.

There are some pretty bright researchers who maintain that Modafinil has such a weak affinity for the dopamine transporter that it’s not really contributing to Modafinil’s effects in humans.

Here’s an excerpt from one prominent review of Modafinil:

Here’s another remark, in the same paper:

A final in vitro study of dopaminergic synaptosomes showed that while amphetamine caused spontaneous dopamine release, Modafinil had no such effect.

But on the other hand, Wisor and Eriksson (2005) reported that a dopamine autoreceptor agonist (quinpirole) reduced the effect of Modafinil. This result suggests that dopamine plays a role in Modafinil’s wakefulness promoting effects.

Our reviewer commented: “As such, the authors suggested that Modafinil worked through an increase in dopamine tone and dopamine’s stimulation of the α1 adrenergic receptor.”

The answer lies somewhere in the middle: Modafinil is a much less robust dopaminergic drug than amphetamine, but has a high enough affinity for the dopamine transporter that this effect is relevant in humans.

Consider a study that investigated the affinity of Modafinil for the dopamine transporter in rats (Gert Lubec’s group, 2015). They reported the following affinities:

Here, u is the Greek letter mu, representing microns. If you’ve taken pharmacology, you might know that the smaller the concentration needed to inhibit 50% of the activity of a receptor (IC50), the more effective and potent a drug it is.

Why does it matter?

You’ll notice that Modafinil’s IC50 for DAT is approximately 100-fold weaker than Ritalin’s. Ritalin seems to inhibit the dopamine receptor much more strongly.

Having personally taken 2mg of Ritalin, I can attest to the fact that it has a (somewhat muted) dopaminergic effect, even at this lower dose.

This extended analysis was all to show that Modafinil probably is dopaminergic at clinically significant concentrations. If you consider its effects on orexin, histamine, and glutamate/GABA, it’s easy to see how these mechanisms might have a synergistic effect.

Why Modafinil Is the Perfect Dopaminergic

Before, we mentioned some intrinsic tradeoffs with dopamine.

Dopamine release correlates with energy, productivity, motivation and reward. On the other hand, dopamine is linked to addiction, schizophrenia, and other mental health conditions.

There are also some pretty convincing studies in humans that indicate a trend between enhanced dopamine function and improved working memory and cognitive performance. This makes some intuitive sense.

But too much dopamine is neurotoxic and actually will impair cognitive performance. If you suffer from ADHD, prescription psychostimulants are undoubtedly an effective treatment, and you probably need the extra boost. It’s a fine line, as pointed out by the New Yorker:

Drugs like Ritalin and Adderall work, in part, by elevating the amount of dopamine in the brain. Dopamine is something you want just enough of: too little, and you may not be as alert and motivated as you need to be; too much, and you may feel overstimulated.

But if you don’t have ADHD, Modafinil is the perfect dopaminergic. It walks the line between enough DAT inhibition to capture cognitive gains and enhanced working memory. But it’s not so potent (like Ritalin) that Modafinil will lead to all the ill health effects of psychostimulants.

I think that if Modafinil were purely a selective but weak DAT inhibitor, its subjective effects would be disappointing. It might feel like drinking half a cup of weak coffee.

But because of Modafinil’s synergistic effects on other neurotransmitters, the dopaminergic effect is made to be more pronounced.

I think this nuanced balance is what gives Modafinil powerful subjective effects without any self-reinforcement or abuse potential.

It’s very interesting –most Modafinil users will report that the subjective effects of Modafinil are mood-elevating and improve overall effect. But this effect doesn’t increase the abuse liability of the drug, which is why it’s a schedule IV drug.

Adderall and Ritalin, by contrast, are schedule II, due to their relatively high addictive potential.

How is Modafinil working for you?

[…] on your body, mind, and soul. It will decrease your drive, passion, and productivity. You must learn to play, or face the psychological damages to yourself and family which […]

We are changing insurance at my workplace and will now have to pay our co-pay + 20% of drug cost and Modafinil is around $900/mo for me. Are there any good generic alternatives to Modafinil?

Any of these 3 Modafinil alternatives could work well for you, but try them out separately and see for yourself: https://corpina.com/3-best-modafinil-alternatives/

Great article. Thanks for sharing, mate. Also, be sure to check out ModafinilSource for news and research on modafinil (Provigil) and its effects on dopamine!

Great, comprehensive article!
I finally find myself as guinea pig for truth or dare testing of Modafinil, bought online, approx USD20 for 10 tablets of 200mg each. 7am Monday morning, no breakfast yet, take 1 tablet with a lot of mineral water. Rush to the office as usual. I admit this: my usual sleepy feeling during noon 12.30 to 4 pm, just dissapeared. The drug start to work from around 8am. True anti-narcoleptic drug, I think. Yes, I can focus much better starring at Excel, some Pdf of thick procedures, lots of Outlook mails.
And the “bonus” is…I kept awake until…23 o’clock…..
Does this drug work for sleepy, bored feeling? Absolutely.
Does it show “NZT-48” effect? No. I still an ordinary staff at work. But overall I know this drug work for me for some circumstances. I am yet to keep the experiments goes until the tablet strip is fully consumed to get conclusive result. I am sure there is a “placebo” effect here but I believe it is only for small percentage from total impact because the wakeful effect on the first day of my test, is absolutely non-negligible. I am keen to endorse this drug to my colleague who snore during COO meetings, it endanger his career unnecessarily.

On wikipedia it says modafinil inhibits 50% dopamine transporters at 300mg. How is that weak? Thats comparable to ritalin.

A side note, methylphenidate can be used often to adhd comorbid bipolar without a switch even without a stabilizing agent, modafinil can’t be used the sa’e way as restless and irritability at minimum, are almost aiwaysnm certain (so you need a stabilizer also on modz, typically), again, the point is not the desease and that alone, but the total net effect of stimulation, clearly amphetamines on 2polars and especially alone is a no go, but so is modafinil, but not Ritalin, so, however you see it you have some aspects wrong etc