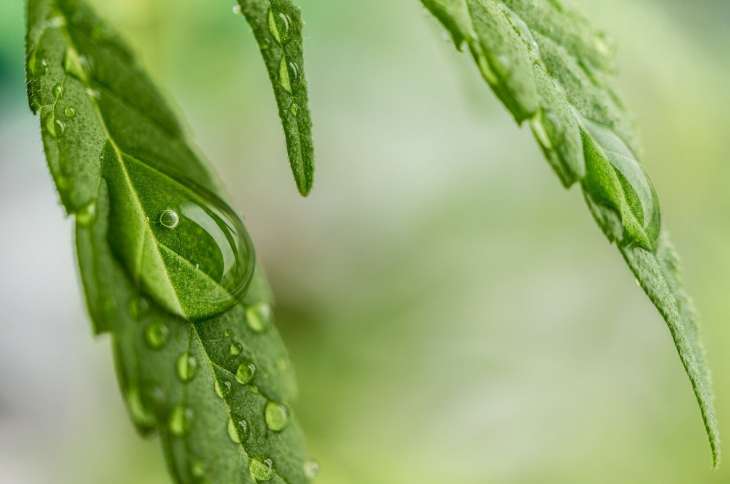 Have you ever considered using cannabis as a stamina builder for better athletic performance? You’re probably thinking “What? That sounds insane!”

Some athletes use it as a training aid to help improve mood, stop the pain, and boost physical performance.

Well, of course, you could be thinking that those athletes are such potheads. But we’re not talking about the cannabis strain that gets you initially high and then craving for more afterwards. We’re talking about a 100% legal, non-addictive, and pure form of cannabis, CBD oil extract.

What’s the fuss about this natural cannabis oil, and does it really have positive benefits on athletic performance?

What is CBD Oil?

Cannabidiol (CBD) oil is derived from the stalk of specially cultivated hemp plants. The plants from which this oil is derived are mostly composed of Cannabidiols, a non-psychotropic substance that does not adversely affect its users.

These special hemp plants do not contain high amounts of the psychoactive substance tetrahydrocannabinol (THC). It’s the THC in medical-grade marijuana and conventional weed that gets people high and addicted. But CBD contains less than 1% of THC, making it legal to own and safe to use.

No. CBD oil’s components aren’t similar to those found in weed or medical-grade marijuana. CBD oil is mostly composed of a non-addictive cannabinoid called Cannabidiol. This substance is able to interact with our body’s natural processes, yet it doesn’t cause that “high” feeling associated with weed. It can alter our bodies for the better, but it doesn’t alter one’s state of mind.

Weed contains large amounts of THC, a substance responsible for the elated feelings and subsequent sluggishness associated with its use. Whereas, CBD oil contains THC in insignificant trace amounts only. That means that CBD oil has an extremely small chance of causing addiction and mental disturbances among its users.

It’s important to reemphasize though, that CBD and weed are both derived from the hemp plant. The difference lies in the amount of THC and cannabidiols in these hemp plants.

These two substances are unique to cannabis. But what’s the big difference between them?

Tetrahydrocannabinol (THC) is the substance responsible for giving a euphoric, elated, or mildly schizophrenic state. THC adversely affects a person’s mental state by binding to CB1 receptors in the brain. This substance is abundantly present in recreational weed. Female hemp plants, which are not allowed to get pollinated by male plants, yield a high amount of THC in their bodies.

Cannabidiols (CBD) is another substance present in cannabis. It’s a major part of a cannabis plant, making up about 40% of the cannabis plant’s extracts. It’s a safe and medically beneficial extract with little potential for abuse. Hemp plants rich in CBD are those female hemp that are allowed to pollinate with the males.

In short, THC is the culprit for mental elatedness and addiction, while CBD is the safer bet for medical use with no addictive properties.

How Does CBD Work?

THC is the substance that binds to CB1 receptors. It alters parts of the brain associated with movement, coordination, emotions, memories, thinking, and appetite.

Now, CBD was previously thought to bind to CB2 receptors. But it appears that CBD pushes the body to use its own cannabinoids properly, instead of specifically binding to CB1 and CB2 receptors, respectively.

Have you ever imagined using cannabis to help treat ailments or to enhance your body’s strength and stamina? Well, that’s a truth slowly dawning on all of us, thanks to CBD oil.

A list of the potential perks that CBD oil can give to athletes:

Inflammation is your body’s way of telling you that it was injured in some way. It’s a cardinal sign that jumpstarts the process of healing itself and defending itself from harmful foreign substances.

Athletes are often prone to injury, and thus, they may often experience some kind of inflammation in their bodies. But enhanced athletic performance would not be possible if your muscles, ligaments, and joints are always swollen and inflamed.

Common medications that treat inflammation include non-steroidal anti-inflammatory drugs such as ibuprofen or naproxen. But long-term use of said medications may result in side effects such as stomach, kidney, and heart problems.

CBD oil comes in as a suitable botanical alternative to NSAIDs. CBD oil contains anti-inflammatory properties that help effectively relieve pain and swelling in your joints, which are brought about by prolonged periods of exercise and heavy exertion.

After CBD has eliminated your inflammation woes, the result is faster tissue healing and improved athletic performance.

Exercise is a proven stress-buster. But if you’re training for a triathlon, a boxing match, or similar events, your stress levels as an athlete might likely kick in.

Cortisol is the stress hormone. When you’re stressed out, your adrenal glands secrete cortisol as part of a mechanism called fight-or-flight. High levels of cortisol in the bloodstream can lead to problems such as weight gain, low immune system, and mental distress.

Did you know that cannabis, in the form of CBD oil, can help alleviate stressful feelings?

You might be used to seeing recreational weed as a mood buster and a stress-inducing substance. That’s because THC operates differently from CBD. THC in weed increases cortisol secretion and induces anxiety and excessive euphoria.

CBD oil has been shown to interfere with the adrenal’s secretion of cortisol in a stressful situation. Cannabidiol helps decrease the influx of cortisol secretion and lowers its current bloodstream levels. This translates to a less anxious and stress-free feeling on the outside, and better sleep patterns as well.

Extreme workouts can sometimes take a toll on your body’s cells. If you’re an exercise nut, you just might feel the burnout that can come when you’re finished doing your heavy routines.

But CBD oil can help you refresh your worn-out cells. CBD oil is rich in antioxidants. These antioxidants help cells fight off free radicals that cause long-term damage.

The result of utilizing CBD oil’s antioxidants? A refreshed immune system, tight glowing skin, increased capability to improve performance, and an overall sense of wellbeing. Now, that’s truly what you’re gunning for as an athlete, right?

As an athlete, you need to carefully take tabs on your weight. You need to curb the urge to eat excessive amounts of unhealthy food, and you should stick to healthy diets to maintain your weight.

What to do when you gain a few pounds? Your trusty CBD oil can help!

Weed has traditionally been viewed as an appetite enhancer. Remember “the munchies”? Well, that’s what recreational weed rich in THC can do. But CBD does just the opposite.

CBD oil helps effectively suppress appetite and keeps you full for longer. It prevents overeating, which subsequently helps shed excess pounds and eventually keeps you at a healthy, manageable weight.

A proper diet may be the key to getting a fit and capable body. But insulin sensitivity also comes into play.

Each time we eat, our body transforms most nutrients into sugar (glucose) or its various derivatives. This glucose needs to be circulated within the body in order to meet our energy requirements.

Insulin is a hormone produced by our body’s pancreas. It helps transport glucose throughout our bodies. Think of insulin as a carriage which the glucose from our food rides in order to get into the bloodstream and reach its target tissues and organs.

Some people have limited insulin sensitivity. Their bodies aren’t capable of utilizing insulin to its fullest functions and capabilities. And if you’re an athlete, that’s quite bad news. Poor insulin sensitivity means there’s a risk you’re not getting all the energy from the food you eat delivered to your bloodstream, tissues, muscles, and other organs. The end result is glucose being stored as excess fat.

CBD oil helps your body utilize insulin by making it function better in your bloodstream. CBD is also found to lower excessive insulin levels in the blood.

CBD oil is legally marketed as a nutritional supplement. It often comes in the following forms:

Topical CBD oils in lotions, balms, and cream forms are quickly absorbed by the skin and don’t directly go into the bloodstream. This is the preferred route for most CBD beauty products.

CBD vapes and pure oils used as vapes are absorbed through your lungs and go directly into your bloodstream.

Tinctures are often used sublingually and are absorbed faster than oral routes.

Oral absorption of CBD is not that good. So, many CBD oil supplements include black pepper and turmeric in their ingredients to enhance absorption in the stomach and intestines. The taste might not be palatable, but the health benefits that you’re after are worth it.

The Link Between Chocolate and CBD Oils

Did you know that chocolate can increase CBD’s potency? Chocolate contains anandamide, a strong cannabinoid neurotransmitter. Anandamide is also found naturally occurring in the brain and is responsible for overall feelings of bliss and wellbeing.

Anandamide found in chocolate is found to help inhibit the breakdown of cannabinoids such as CBD. The result is that CBD sticks around longer in the body, amplifying the compound’s beneficial effects.

Consuming chocolate-laden supplements alongside CBD oils may help you get your fix of performance-enhancing health benefits faster than if you consume CBD oil supplements alone.

Is CBD Use Considered “Doping”?

Doping is the use of banned performance-enhancing substances prior to a sports competition or match.

World Anti-Doping Association’s list of prohibited cannabinoids includes THC (tetrahydrocannabinol), marijuana, hashish, pure cannabis, and cannabimimetics (Spice). CBD oil or cannabidiol is clearly not on their list, and is therefore safe and allowed for use.

WADA cautions recreational hemp users because the toxic substance THC will become traceable in their urine, and it is considered doping. But CBD oil doesn’t contain THC, so CBD use is not considered as athletic doping.

Athletes should also know where their CBD oils come from. They must come from reputable companies and should be in the purest form, without significant amounts of THC included. There’s always a risk that athletes are using a CBD product with THC in it, all the while being completely unaware.

Again, CBD use is not considered doping under WADA’s stringent measures.

Cannabidiol is definitely a safe, legal, and non-addictive hemp product. It is totally different from its well-known destructive cousins such as hashish and tetrahydrocannabinols.

CBD oils carry promising medicinal properties that could be beneficial for athletes. These include fighting off inflammation, stress, obesity, and excessive appetite, while improving immune and endocrine function. All these beneficial properties lead to one thing – better health for athletes and greater chances of improving both strength and stamina.

You have lots of choices when it comes to taking CBD oil – orally through pills and powders, dissolving it under the tongue, inhaling it, or applying it to your skin. Another plus is that CBD oils are not considered doping substances under WADA standards. What’s not to love?

So, not all cannabis strains are harmful. CBD oils hold a wonderful promise in the world of medicine and sports.