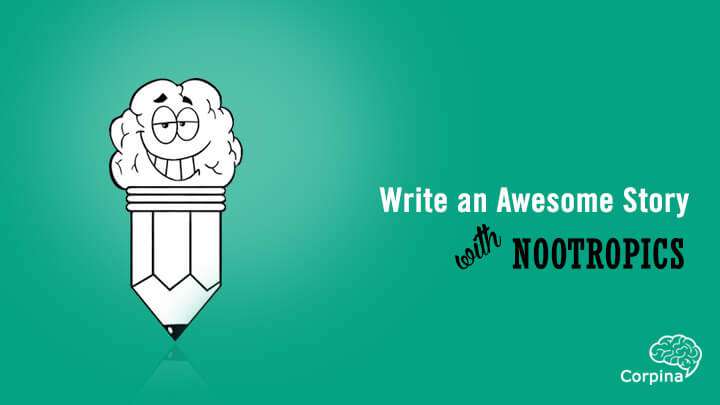 The Best Nootropics for Writers

We all take nootropics to improve our lives. The benefits of nootropics are well known: they can provide improvements in memory, reasoning, focus, energy, and motivation that are long-lasting and safe.

However, with all the discussion and marketing of nootropics, it can be difficult to know how to start, or which nootropics are best for your particular needs.

To help our audience make these important decisions, we at Corpina have decided to create a multi-part series of articles on ‘purpose-driven nootropic use,’ which simply means ‘using the right drugs for the job.’

We hope to help you connect the activities that you need support with, like studying, presenting and speaking, writing, and athletics, with the nootropics that will give you the greatest, most useful enhancements. This first installment is on writing.

Writing is an activity that takes up a great deal of time for students and professionals alike. In today’s economy of ideas, expressing oneself effectively through the written word is a crucial skill. People who can write clearly and persuasively will rise to the tops of their classes or their fields. If you can write fast, that’s even better.

However, most of us are not naturally gifted writers, able to produce a perfect essay or even a perfect email for a boss on demand. Writing is tough, slow work for many of us, and ways to make strong writing easier and faster would be very attractive. Luckily, they exist, and you’ve got some choices: nootropics have been used for writing since they were first discovered.

One of the most common and difficult obstacles in the path of strong writing is writer’s block. It can be a huge challenge to think of where to go next when writing something, from a big decision like how to structure your overall argument to a small one like which word to use, how to structure a sentence, or which example would best support your claims.

Enter Piracetam, the classic writer’s nootropic. Its most obvious effects, according to most people, are improvement in clear, articulate expression (both written and spoken) and word and concept recall. Put another way, Piracetam helps you think and express yourself more clearly, and makes it easier to remember the perfect word or idea to put together a sentence or an argument.

Piracetam is legendary in the nootropic world for a reason: it is safe, effective, and affordable, and its benefits are perfectly suited to writing. If you have a lot of writing to do, and you need it done quickly and well, you should strongly consider picking up some Piracetam.

Focus is another huge area of struggle for writers everywhere. Writing is not usually an incredibly enjoyable and stimulating activity, but focus is a necessary element of strong writing, and makes the work go by faster too. Closely related to focus is mental energy–writing is hard, tiring work, and as your mental energy is depleted it becomes more and more difficult to keep up the focus and the higher cognitive processes that make for high-quality work. Caffeine and Modafinil are great choices for improving your natural focus and giving you the energy you need to produce strong work for hours on end.

If you’re researching nootropics, odds are good that you’re already well-versed in the world of caffeine. Caffeine is pretty useful, as the millions of people using it every day will agree. But it has major downsides, too. It is addictive: its effectiveness decreases over time as tolerance builds, and withdrawal is truly unpleasant. It can make you jittery and nervous. It is short-acting: you need to keep drinking coffee for the effects to last more than a couple of hours, and if you drink more than a couple of cups a day the addictiveness and side effects become an even bigger problem. For these reasons, Caffeine has not gained a reputation as a perfect aide to writing: but it can become one, if supplemented with the right nootropics.

It is a good idea to combine it with a nootropic that will improve the benefits of Caffeine while decreasing its downsides (nootropics are great to combine with one another; this often “powers up” and intensifies the good effects of each one while decreasing any drawbacks. This is why nootropic-users often speak of taking a ‘stack,’ a regimen of different nootropics designed for maximum effectiveness). For writing, you have two really good options for nootropics to combine with Caffeine, Theanine and Ashwagandha.

Theanine is a chemical found especially in green tea. You may have noticed that green tea has a calming, focusing effect that is quite different from the effect of coffee, though both contain Caffeine. The reason is Theanine. Theanine smoothes out the hard edges of Caffeine and makes the Caffeine buzz less anxious and more useful, especially for the writer. The effects of Caffeine alone can be useful when wakefulness and energy are the only goals, but Caffeine has a great deal of potential for the writer which can only be released through supplementation with nootropics.

Note: probably my favorite nootropic stack is Smart Caffeine from Natural Stacks. It combines the benefit of caffeine with the relaxed focus effect of l-theanine.

Taking Theanine with coffee or another Caffeine source allows you to have the effects of drinking many cups of green tea over the course of the day, and is much easier. Theanine is also useful on its own, especially for people with anxiety—it is one of the most effective and certainly one of the safest anti-anxiety supplements on the market. Its calming effects enable the clear and orderly thought processes that underlie effective writing. Theanine is an awesome tool and an indispensable part of the writer’s nootropic toolkit.

Anxiety is not frequently talked about in the context of writing, but it should be. Whether the real capital-A Anxiety involved in producing a high-stakes report or the more everyday preoccupation and cloudiness that prevents us from clearly and articulately organizing our thoughts, anxiety is a fundamental enemy of the writer, and nootropics that help with anxiety can be hugely helpful. One nootropic that is well-suited to the minor anxieties of writing is Ashwagandha.

Ashwagandha is an Ayurvedic herb with a long history of safe, effective use for a variety of purposes, including stress relief, learning and memory improvement, and help with anxiety and depression. Over 200 studies of Ashwagandha have been completed, making it one of the best-studied plants in the Ayurvedic pharmacopeia. Anecdotal evidence suggests that Ashwagandha pairs as well with Caffeine as Theanine does, and that even on its own it is a very useful and versatile nootropic (it is frequently compared to Bacopa, another great nootropic from the world of Ayurveda). Ashwagandha is definitely a great option for anyone looking for help with writing.

The last writer’s nootropic we’ll cover is Modafinil. It probably won’t surprise you to hear that Modafinil is well-suited to the writer, especially when you’ve got a deadline the next morning and 30 pages to write before then. Modafinil offers its characteristic blend of long-lasting energy and focus, and makes truly herculean feats of writing feel easy. Writing is in fact what Modafinil is best-suited to. So if you’re just getting started with Modafinil (ah, I remember those days), a major writing project with assistance from some Modafinil is a great way to test the waters.

How To Increase Intelligence: 3 Ground-Breaking Approaches [2019]

How Oxiracetam Makes You a Better Public Speaker

Hello Elizabeth, the same stores that sell nootropics for everyone are the stores you want to check out when buying nootropics for writing better. I put together a nice list in another post, which you can check out here: where to buy nootropics online in 2017.