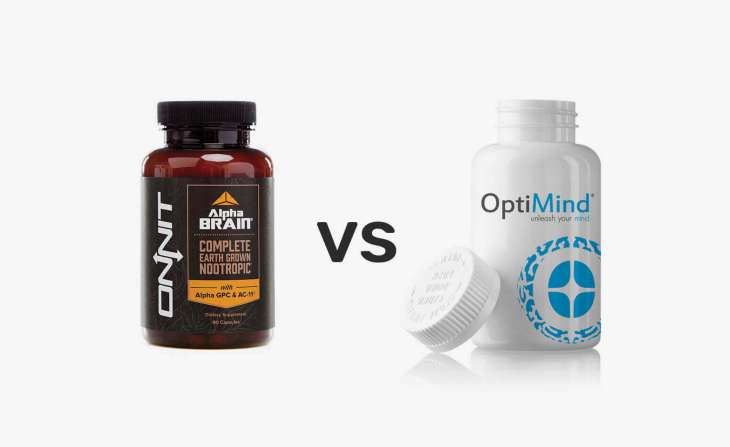 Alpha Brain and Optimind are two of the most well-established nootropics currently on the market.

Both have legions of followers, including a handful of big-name celebrities. People from around the world use the two supplements for their smart drug benefits.

These two popular nootropics make similar claims. They both promise to enhance concentration, focus, and memory. They also purportedly give users an energy boost.

The stated effects are similar to Adderall. Yet unlike this prescription stimulant, neither nootropic is addictive or has serious side effects. They both provide serious brain-enhancing benefits without any of the risks of Adderall.

So how do the two nootropic supplements stack up in head-to-head combat? Which works better? That’s what I wanted to know.

Buckle up for my in-depth report on Alpha Brain vs. Optimind.

Alpha Brain is a supplement stack created with a variety of nootropic ingredients.

It’s produced and sold by Onnit, one of the top nootropic supplement manufacturers in the United States. The company claims that Alpha Brain is:

Talk show host and comedian Joe Rogan endorses Alpha Brain and frequently mentions it on his popular podcast. Other celebrities that swear by the supplement include NFL linebacker Brian Cushing and NHL player Duncan Keith.

Because of its popularity, Alpha Brain, unlike most nootropic stacks, has been scientifically studied. The Journal of the International Society of Sports Nutrition states that Alpha Brain:

I wanted to know what makes Alpha Brain tick. So I took a look at its ingredients list.

These are the ingredients used in Alpha Brain:

L-theanine makes it easier for all the ingredients to reach the brain. It also improves the mood and reduces anxiety.

Huperzine A, on the other hand, enhances memory and improves learning recall, according to a study in Neuro-Signals. The ingredient also possibly reduces the risk of Alzheimer’s, dementia, and other memory disorders.

Something that I love about Optimind is their free two-week trial. It’s the perfect way to get a feel for the supplement to see if it’s right for you. I wish Alpha Brain would also offer a free trial.

Optimind claims that their product will “unleash your mind.” They go on to state that it will enhance your focus, energy, and mental performance.

Though it’s not quite as popular as Alpha Brain, thousands of people have successfully used Optimind. Chief among them are students, business executives, CEOs, and athletes.

What exactly is in Optimind that makes it so compelling? To get to the bottom of it, I took a look at the ingredients used in the supplement.

These are the ingredients used in Optimind:

You’ll notice that Optimind has some of the same ingredients as Alpha Brain. Yet there are a few additional ingredients that stick out.

Chief among these is caffeine. Unlike Alpha Brain that provides an energy boost with other ingredients, Optimind relies on caffeine.

According to Harvard Mental Health Letters, caffeine not only provides its well-known boost of short-term energy, but it also enhances overall brain function. It specifically improves memory, focus, and learning retention.

Similarities Between Alpha Brain and Optimind

The effects of Alpha Brain and Optimind are very similar to each other.

Take either of the two nootropic supplements, and you’ll notice a marked increase in energy, alertness, and memory.

Both Alpha Brain and Optimind make staying on task far easier. They’re incredibly useful tools when it comes to studying or working on a challenging project.

Also similar is that both supplements take effect right away. You’ll notice increased alertness and energy within an hour of taking your first capsule.

Effects become stronger over time as the ingredients build on top of each other. For example, memory retention seems to hit and maintain its peak after one month of use.

Differences Between Alpha Brain and Optimind

There aren’t all that many differences between Alpha Brain and Optimind.

Of course, there are the straightforward ones like the ingredients used in each. The two manufacturers also recommend different doses.

Perhaps the most noticeable difference as far as effects go is that Optimind provides more of an energy boost. You almost feel a buzz after taking it. This is undoubtedly because it contains caffeine.

Alternatively, Alpha Brain seems to provide more long-term benefits. The effects of Optimind didn’t exactly wear off, but they become sort of routine over time. Each time I took Alpha Brain, even after a full month of use, its effects were immediately noticeable.

The only other significant difference to note is that Alpha Brain is slightly cheaper than Optimind.

No single nootropic supplement is right for everyone. It’s important to find the one that works best with your mind and body.

Another option is to build your own nootropic stack. A DIY supplement like this allows you to add in the exact ingredients you want.

Alpha Brain and Optimind are very similar nootropic supplements. Yet their particular differences are still noticeable.

The best thing you can do to choose between the two is this:

What are your thoughts on Alpha Brain vs. Optimind? I’d love to hear from anyone that’s used both before.