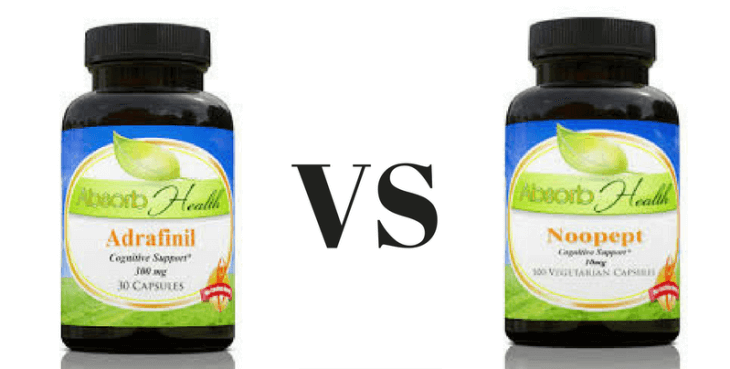 Weighing Adrafinil vs. Noopept is tough.

Questions of efficacy and compatibility with other nootropics are essential to settle before you start on a new stack.

If you’re interested in learning a bit more about the properties of Noopept and Adrafinil to see which you should add to your stack, read on.

In this article, I’ll get into the reeds with the science to pick out the winner between the two, if there is one.

I’ve used Adrafinil and also Piracetam, which many users report is very similar to Noopept. Neither Adrafinil nor Piracetam was very helpful to me, although I’m glad that I tried them.

It’s tough for me to make a snap judgment, and it’s better to think of them as different tools for the same job rather than one as superior to the other.

Adrafinil is a popular nootropic that’s a prodrug for Modafinil, which is also very popular.

Many users report that Adrafinil provides them with a very long reprieve from sleepiness, clearer thoughts, increased focus, and a better short-term memory.

You can buy Adrafinil over the counter or on the internet.

Adrafinil has a few mechanisms of action, not all of which are fully understood. What is understood is that Adrafinil must first convert into Modafinil via Cytochrome P450 enzymes within the liver before it is biologically active.

Following conversion into Modafinil, the Modafinil is then metabolized further, which results in nootropic effects.

Adrafinil’s prodrug status means that it’s a bit harder on your liver than other nootropics, so tread with caution. Adrafinil is safe for occasional use, but repeated use might damage your liver over time.

Luckily, Adrafinil probably won’t damage your brain or any of your other organs with consistent use.

The mechanism of action that Adrafinil and Modafinil employ are dopaminergic and noradrenergic, which has led some research to compare them to the stimulant class of drugs.

Most users don’t seem to think that Adrafinil is blatantly stimulating, which makes sense given that Modafinil isn’t a dopamine releasing agent so much as a dopamine transport inhibitor.

Users who experience negative side effects or take too much Adrafinil feel overdose symptoms that are typical of stimulant drugs: sweatiness, anxiety, dry mouth, headache, and paradoxical brain fog.

When I took Adrafinil, I experienced the brain fog quite acutely, although I’m in the minority of users.

Noopept originates from Russia, where it is popularly prescribed in a variety of indications, some of which are nootropic.

Many users compare Noopept to Piracetam, and in my view, it’s an apt comparison. Noopept isn’t a racetam, but its metabolism and subjective effects are extremely similar to the racetams.

Like the racetams, Noopept metabolizes into a neuropeptide called cyclo-prolylglycine, which is bioactive and confirmed to be responsible for the nootropic effects of the racetams.

So, Noopept is also a prodrug, although it’s notably not linked to any elevated liver enzymes like Adrafinil is.

Noopept is absorbed and excreted relatively quickly and provides a daily usage window that’s a bit shorter than Adrafinil’s yet also more amenable to re-dosing as needed.

It seems to be pretty tough to overdose on Noopept, but some users report negative side effects such as dizziness, anxiety, headache, dry mouth, and distorted vision.

The dizziness and distorted vision aren’t pleasant, but they’re also not scary in my experience with the racetams.

The flip side of the side effects is that it seems much easier to lose yourself in a project while taking Noopept.

Which Should I Take?

The profiles of Adrafinil and Noopept are very similar in many ways, though both have a few caveats and side effects which you’ll need to know. If you have any liver issues, Adrafinil is out.

If you have any anxiety issues, Noopept might be a bad idea. If you don’t fall into either of the above camps, your usage case determines which to take.

If you’re interested in staying up all night and improving your focus from time to time, Adrafinil is the best bet. Noopept isn’t as stimulating, and won’t prevent you from sleeping in the way that Adrafinil often will.

If you need to stay up late all the time, you should probably figure out a different strategy, though: Adrafinil isn’t healthy for long term use.

If you need to use your nootropic consistently over a long period, at the moment the research we have indicates that Noopept is the safer choice because it’s easier on your liver.

With that said, we don’t have the same level of information about liver enzyme induction when we’re talking about Noopept.

Adrafinil is better studied, and it’s also a prodrug for Modafinil, which is very well studied and is the subject of even more research that’s currently being performed.

Noopept suffers from a deficit of information in many different categories, although it also rests on the racetams, which are well studied—although technically a different class of chemical.

It’s entirely possible that the picture of these two nootropics will change substantially as both are researched more, but for the moment, it seems like Noopept is the safer choice for long term use.

For short term use, there aren’t major safety or efficacy differences. There are many glowing reports about both Adrafinil and Noopept around the internet, and I encourage you to go check them out.

My suggestion is to try both separately while performing a common mentally taxing task and see which one works better for you.

If you responded well to Modafinil in the past, try Adrafinil first. If you’re fond of Piracetam, try Noopept first.