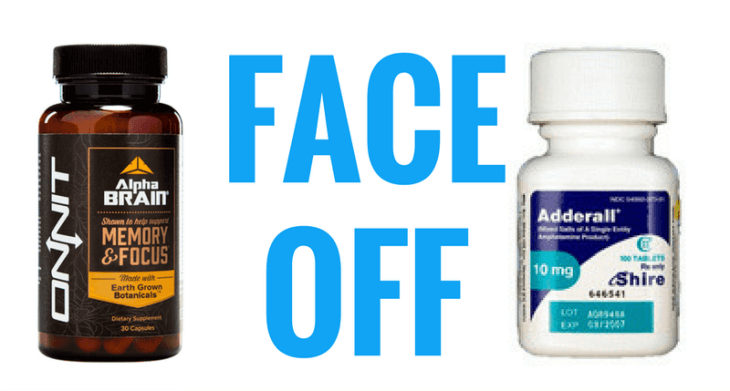 Have you ever had one of those days where you just can’t get anything done?

Maybe you have too much on your mind. Maybe you’re feeling tired after a long week. Or maybe you just can’t get motivated.

Sounds great, doesn’t it? Well, there’s a downside. Adderall is addictive. According to DrugAbuse.com, it’s one of the most commonly abused prescription drugs in the United States.

Instead of toeing the line of dependency, why not try a supplement that produces the same effects as Adderall without the risk for addiction or abuse?

I’m talking about Alpha Brain. Created by Onnit Labs, Alpha Brain is perhaps the most popular nootropic stack on the market.

Here’s everything you need to know about Alpha Brain vs. Adderall, so you can choose which one is better for you.

Rogan swears by Alpha Brain. He claims it works wonders to enhance his overall mental power over the course of the day, aiding with a range of activities that include Jiu-Jitsu moves and new comedy bits.

He goes on to state that Alpha Brain is responsible for increasing his energy, focus, and memory.

As a nootropic supplement, that’s exactly what Alpha Brain is intended to do.

It’s created specifically for the purpose of boosting concentration, memory, and brain health. There’s a reason why nootropics are often referred to as “smart drugs” or cognitive enhancers.”

But what makes Alpha Brain so unique? That’s what I wanted to know.

Who cares if top athletes and celebrities endorse a product? I want to know why it works, and whether it’s a suitable replacement for Adderall.

The secret is Alpha Brain’s stack formula. Instead of using a single ingredient, Alpha Brain combines 11 nootropic ingredients into a single capsule.

The ingredients used in Alpha Brain are:

This blend of ingredients lends the supplement its incredible cognitive benefits.

Though every ingredient has a purpose, the oat straw, in particular, is exciting. According to the Journal of Alternative and Complementary Medicine, Oat Straw provides an enormous positive impact on cognitive performance in healthy people.

L-theanine is another ingredient that has powerful, proven effects. These include increasing energy while relaxing the body and reducing anxiety. L-theanine also helps promote a better sleep cycle, so you wake up well rested.

Best of all is that Alpha Brain doesn’t require a prescription. Unlike Adderall, it’s completely safe and legal to use no matter the circumstances.

Similarities Between Alpha Brain and Adderall

The effects of Alpha Brain and Adderall are very similar to each other.

Taking either will result in much the same experience. Namely, a sense of calming, relaxing focus and a boost of energy.

Both Alpha Brain and Adderall will help you get the job done, whether that’s studying, homework, or a project for work.

The two substances also benefit athletes. Not only does enhanced mental prowess improve sports performance, but it also makes training and conditioning before an event easier.

Another similarity is that both Alpha Brain and Adderall produce short-term and long-term effects. Take either, and you’ll notice an initial jolt as well as drawn out effects throughout the course of the day.

Differences Between Alpha Brain and Adderall

Aside from their effects on energy and mental performance, Alpha Brain and Adderall don’t have much in common.

For starters, Adderall is a prescription medication. Though it’s easily found on the black market, it’s illegal to consume without a prescription. Alpha Brain is completely legal and doesn’t require a prescription.

Long-term use of Adderall can also cause both mental and physical dependency. Your body comes to rely on the drug. Quitting Adderall cold turkey can lead to severe withdrawal symptoms.

Alpha Brain is completely non-addictive. Even after taking the nootropic supplement for a long period, you can easily quit without experiencing any withdrawal symptoms.

Finally, Adderall comes with a crash. As the drug leaves your body, you’ll probably feel more than a little nauseous, tired, and apathetic.

Alpha Brain’s proprietary blend of natural ingredients minimizes the comedown. There’s no crash after use. You’ll feel completely normal the day after taking it.

Okay, let’s get back to the titular question: Alpha Brain vs. Adderall. Which one is best for you?

The answer should be obvious by now. The vast majority of individuals are better off taking Alpha Brain if it’s cognitive enhancement you desire.

Alpha Brain provides this mental boost without any negative effects. Also, you don’t have to have a prescription for it. You can buy it 100% legally.

Yet Alpha Brain isn’t right for everyone. Those that have ADHD, the disorder Adderall is designed to treat, are much better off finding a prescription for the medication.

If you do have any of the symptoms or signs of ADHD, it’s a smart idea to talk to your doctor to see if Adderall is the best choice.

There’s no denying that Alpha Brain is one of the best nootropic supplements.

There’s simply no reason for most people without ADHD to use Adderall instead.

Here’s what I think you should do:

What do you guys think? How do you rate Alpha Brain vs. Adderall?

I’d love to hear from you in the comments below.

Given the 100 or so articles recommending nootropic alternatives to Adderall, I’m not sure how you reached that conclusion. 😉

I am at my wits end with Adderall. I have been diagnosed with ADHD and have been prescribed Adderall for years now.

My primary doctor has retired, and I have had a real struggle finding a doctor who even has an opening at their practice.

I have one pill left of Adderall as I type this.

I am scared of crashing without Adderall. Hectic is underused when describing my current stressors and professional pressures.

I am someone that can show the benefits of Adderall such as I graduated from high school with a 1.8 GPA.(I was supposed to take a different ADHD medicine then but wouldn’t because I was in denial and didn’t like the way it made me feel).

I had heard of alpha brain promoted before and ordered some a few days ago.

I loved your article, and I know that I need to make the smoothest transition possible. On top of Alpha Brain is there anything else that I should know about that may help me.

I know your not a doctor and preface the question in a way that values your input and insight into nootropics. Anything you can share would be much appreciated.

Thanks, Andy
p.s. Even my “then Doctor” didn’t know what Nootropics were.

First, you won’t need and shouldn’t use Adderall your whole life, ADHD usually improves throughout your life as you get older. Adderall also has been tested for helping dopamine receptor connectivity in the long term. These brain supplements have not been tested as well as the regulated stimulants and there is still an unknown element. I would be careful with using any supplement that has precursor to L-Dopa- also L-Dopa only effects Dopamine and not nor-epinephrine and has the potential to cause stimulant psychosis as well. I would definitely not use in conjunction with Adderall as you would be asking for an admission to your local mental ward.

It’s ridiculous to think that a supplement will have the same effect on dopamine and nor-epinephrine as a stimulant. Also if your cognition is truly effected and improved with Alpha-Brain than most likely the dopamine levels would increase and thus would have a addiction component to it.