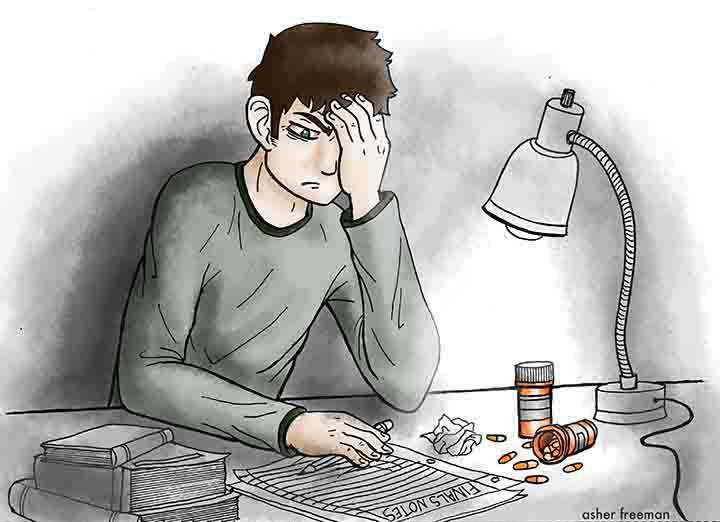 It is well-known that Adderall can be an effective off-label treatment for generalized depression.

Some doctors have prescribed it for moderate to severe cases of depression, although it is not very common nowadays.

Nevertheless, many people have taken Adderall for this purpose. While psychostimulants like Adderall can prove to be effective in combating a case of the blues, it is ultimately detrimental to the user.

Yes, your energy and mood may improve after taking Adderall, but as with most prescription-strength drugs for depression and anxiety (I’m talkin’ to you, Xanax!), it is a dangerous substance in the long run.

The benefits of Adderall are achieved after the initial dose and psychostimulation continues for weeks or even months after that first dose.

But as plenty of Adderall users can attest to, it isn’t long before their psychomotor activity and mood improvement diminishes and the effects are barely there.

At first, after several months of daily dosages, the user detects a slow decline in its efficacy and, in no time at all, you’re back at the doctor’s office, asking for a stronger milligram prescription.

This is why tolerance is one of the biggest problem facing patients that are taking Adderall, particularly in the case of depression.

This reduction in neurophysiologic response isn’t limited to the lower dosages either. Once you start taking larger doses, you will eventually build up a tolerance to them as well. (Related: Adderall Tolerance Sucks: Here’s What You Can Do About It)

This is where Adderall abuse comes into play and it’s the reason why you may have heard a patient loudly arguing with a physician or nurse at your own doctor’s office.

Persons who develop an acute tolerance to Adderall will often abuse their prescription medication, taking more than their daily allotted amount which, of course, results in their running out of their monthly supply before the appropriate date.

And tolerance and addiction are not the only concerns people should have about Adderall.

Back in 2004, Shire Pharmaceuticals, the company responsible for Adderall, had to report to the FDA (Food & Drug Administration) no less than 32 deaths that were directly or indirectly caused by Adderall.

Of those 32 deaths, 20 of them were heart attacks suffered after taking Adderall and 12 of them were strokes. It is clear that Adderall is far from safe and only effective in the short term.

The good news is, there are plenty of all-natural alternatives that can be every bit as beneficial when it comes to battling depression and improving your mood.

Below, I have listed 5 of my personal favorites.

L-Theanine is a non-essential amino acid that acts as a psychoactive substance. It swiftly crosses the blood-brain barrier, meaning that it is far more fast-acting than most prescription anti-depressants.

L-Theanine has been used for ages as a stress relief and anti-depressant supplement, and it exhibits anxiolytic (anti-anxiety) properties as well. Dr. Ray Sahelian has written about how L-Theanine works as a viable tool for decreasing anxiety and alleviating stress. On his website, Dr. Sahelian discusses how L-Theanine supplementation results in more Alpha Brain activity in the brain which is a sign of enhanced relaxation. He also talks about how L-Theanine blocks the binding of l-glutamic acid to glutamate receptors in the brain.

People have also found that L-Theanine can improve concentration and learning ability. It is often found in proprietary blends (good options: Alpha Brain, Qualia) but it can be purchased on its own in supplement form. Some good options are  Now Foods L-Theanine Double Strength and Absorb Your Health L-Theanine.

A member of the B vitamin family, Sulbutiamine is a modified variation on thiamine. It is well-regarded as a natural anxiolytic which can significantly improve moderate cases of depression and like Theanine, it can quickly cross the blood-brain barrier.

Users on the Social Anxiety Support web forum have raved about its capacity for vanquishing anxiety, inducing sociability and relieving inhibitions, even going so far as to call it “amazing.” They say that Sulbutiamine kicks in within 1-3 hours of ingestion and it makes a real difference.

Landing on lists of The Best Nootropics for Depression, Sulbutiamine is readily available online and in most vitamin shops nationwide.

Inositol, otherwise referred to as Vitamin B8, is a powerful natural remedy for mood enhancement.

Inositol use causes hostility and tension to dissipate, and sadness to be seriously assuaged.

In Mischoulon and Rosenbaum’s compendium, two experts espouse Inositol as a stand-alone treatment for generalized depression as well as panic disorders.

You can buy Inositol in a powder form, or in capsules.

A derivative of the Hypericum perforatum plant, St. John’s Wort is used for a number of different problems including nerve pain and anxiety.

Used for centuries to treat mental health conditions, it has long been prescribed across Europe specifically in the treatment of depression.

Although current findings about its effect on depression are inconclusive and ongoing, it has been in use to this end for quite some time.

One Reddit user even called it the “happy plant,” saying that it made him more socially outgoing and noted its benefits in the realm of stress, anxiety, and depression.

Be careful taking St. John’s Wort together with medications as there are several contraindications.

S-Adenosyl methionine is a cosubstrate that is involved in methyl group transfers.

Produced and consumed in the liver, SAM-e is an essential amino acid which has been used to reverse neurodegenerative diseases, promote memory, improve mood and fight depression.

A user on Cure Zone said that SAM-E has helped them “almost magically with depression.”

This same user said that it is “a highly effective non-prescription remedy,” adding, “You feel no physical difference from usual—you’re just happy and in a positive mood with negative spiraling thoughts disappeared as if by magic.”

He also notes that there are no negative side effects (mentally or physically) but maybe a few positive ones.

“You don’t have to wait weeks for it to be effective,” he says. “When you need relief, all you need to do is pop a couple pills.”

Of course, the buck doesn’t stop here; there are some effective over-the-counter alternatives to Adderall, and countless other remedies and methods that can be incorporated to help combat depression.

Some believe in meditation while others espouse acupuncture. Naturally, results may vary, depending upon the person and their preferences.

Some have suggested that Aniracetam is a strong tonic to depression, but I hesitate to include it here due to the fact that it is in the highly controversial racetam family.

Not only can they be risky in the long-term, but it can cause muscle convulsions and many other negative effects.

Aniracetam’s side effects include all of the following:

One user on Reddit even had a terrible experience with Aniracetam the very first time they tried it.

About 30 minutes into dosing with one 750 mg tablet, he says, “I started feeling a little foggy, then within one hour I was downright tired, disoriented and nauseous!”

Readers are urged to develop their own routine. One problem that helps to perpetuate depression is lack of routine. People who are on a set schedule are often less likely to develop long-term depression.

There are other vital health factors that can have an impact on depression. One of the greatest causes of depression is a poor diet.

So there you have it!

Let me know if any other options worked well for you in the comments below.