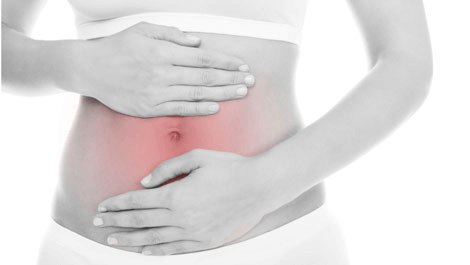 Are you frequently suffering from stomach pain after using Adrafinil? If so, this is the right article for you.

In this article, I’ll take a look at Adrafinil, common causes of stomach pain, and give you some advice to avoid stomach pain while consuming Adrafinil.

As a word of warning, there hasn’t been any research conducted into Adrafinil’s impact within the stomach specifically, and Modafinil, Adrafinil’s bioactive metabolite, isn’t much better.

Most of what I’ll put together in this article is based on the data that we do have and a few hunches, but don’t take it as gospel.

Adrafinil is a hot nootropic these days, and it’s no secret why: Adrafinil promises its users improved focus, wakefulness, better short term memory, and faster thought.

You can purchase Adrafinil over the counter and across the internet’s many nootropic sites.

Adrafinil’s fame stems from the widespread success of Modafinil within the nootropic community. Modafinil has since been scheduled in the US and is now difficult to find without a prescription.

Because of this, the unregulated Adrafinil is the next best thing.

Adrafinil is a dopamine transport inhibitor and also affects the noradrenergic neurotransmitter system, although weakly.

In general, Adrafinil is a subtle nootropic which many users find difficult to detect. My experience with Adrafinil is that it gave me a boat load of brain fog, though I didn’t experience any of the gastrointestinal issues that some users report.

The most common side effects of Adrafinil are nausea, stomach pain, anxiety, dry mouth, and brain fog.

Many users also report that their urine smells odd after consuming Adrafinil, which is likely due to an aromatic ester created during its metabolic breakdown.

Adrafinil has a reputation for being tough on your liver, which is borne out by the evidence that we have regarding enzyme induction caused by Modafinil.

Both Modafinil and Adrafinil independently induce liver enzymes, which means that repeated use will cause liver damage after a long enough period.

What is clear is that despite our intuitions, the stomach pains caused by Adrafinil are completely unrelated to its roughness on the liver. The liver and the stomach are near to each other but have entirely different pain sensations and reasons for pain.

How Can Adrafinil Cause Stomach Pain?

There are similar reports documented for Adrafinil’s metabolite and primary nootropic molecule, Modafinil. Interestingly, Adrafinil’s stomach-sickening effect may be dependent on individual biology, as it was also studied as a motion sickness aid.

Stomach pain can have many different origins, and it’s going to be tough to triangulate exactly how Adrafinil causes it.

I view it as faintly possible that the dopaminergic activity of Adrafinil persists within the gut during the first-pass metabolism in the stomach.

There’s a lot of talk about the gastrointestinal nervous system lately, and it’s far from totally understood. If Adrafinil or its metabolites bound to receptors within the gut directly, dopaminergic neurotransmission it could explain stomach pain.

My idea may be just a space shot, though.

It’s extremely difficult to be sure without a study examining these particular hypotheses, though.

A better strategy will be to suggest some buffer foods or liquids to consume or not consume along with your Adrafinil dose.

General tips for avoiding stomach discomfort go double when you’re taking a nootropic with a reputation for causing stomach issues.

If you’ve somehow made it to adulthood without recognizing things that make your stomach sick, I’ll quickly summarize for you:

The above list has more don’ts than dos, though. A small meal with plenty of protein and also a few vegetables is the best option for before your dose, but try to defer to the foods that you know don’t ever disrupt your stomach.

By eating with your Adrafinil dose, you will increase the amount of time that it takes before you realize the subjective effects of the Adrafinil.

You’ll also smooth out the absorption of Adrafinil by providing a lot of additional matter that absorbs at the same time, which may be desirable.

You should feel free to experiment with different pre-Adrafinil meals and snacks. You won’t ever inactivate your Adrafinil by taking it with food, so make your stomach comfort a priority.

It’s unlikely that you’ll be able to totally mitigate the negative gastrointestinal effects of Adrafinil if you’re extremely susceptible to them.

Damaging your stomach lining is no joke, and you will regret not being able to eat your favorite foods because you were chasing a new nootropic for your stack.

It’s entirely possible that your gastrointestinal biology may not be compatible with using Adrafinil as a nootropic—which is pretty rare, considering that we’re usually limited by compatibility with our brain chemistry.

In my view, the minor positive effects of Adrafinil aren’t worth consistent suffering. If you’ve found the ultimate remedy to stomach pains or discomfort while on Adrafinil, let everyone know in the comments.