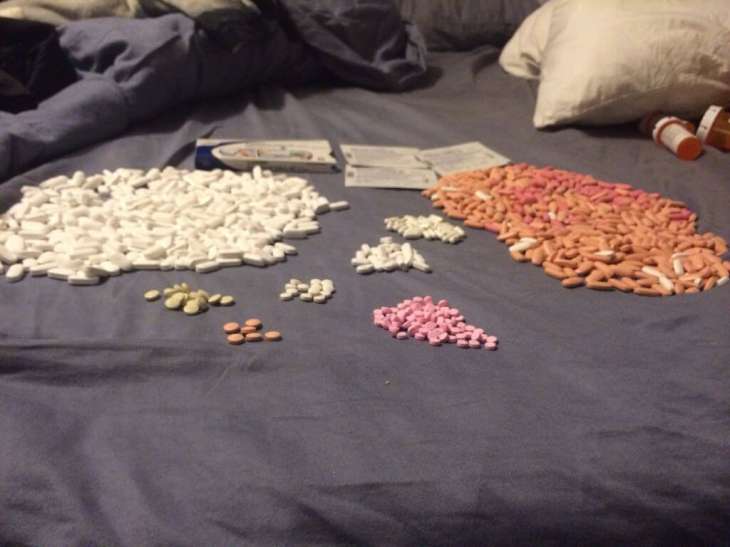 Adderall and Xanax are classified as Controlled Substances for a good reason—because both of these substances have a high risk of addiction and abuse. Adderall is an amphetamine analogue and, as such, it is highly addictive.

As a “study drug,” Adderall is not only regularly abused by college students but studies have found that students who use Adderall for off-label purposes are more likely to use other illicit substances.

One study reported that these students are eight times more likely to have used cocaine and a whopping ninety percent were also binge drinkers.

People used to call weed a gateway drug, but this same study found that those using Adderall non-medically were actually three times more likely to be using marijuana, suggesting that Adderall is, in fact, the real gateway drug.

Xanax, on the other hand, is a benzodiazepine that contains alprazolam. It is typically used as an anxiolytic to treat anxiety and depression, but the very disorders which it treats can also proliferate with long-term use.

Here we will explore just what makes these substances so addictive and how one can avoid addiction. We will also offer helpful suggestions on how to find the perfect Adderall and Xanax alternatives.

What Makes Adderall So Addictive?

Adderall is a powerful CNS (Central Nervous System) stimulant. It carries with it a strong potential for addiction for a number of reasons.

Many students use it as a so-called “diet drug.” This is due to its ability to speed up one’s metabolism, thus resulting in fast weight loss.

Others use it as a “party drug” because it helps people to stay awake and power through excessive alcohol consumption without feeling the effects of the alcohol hit them early on in the evening.

There are many dangers to mixing the two, but nevertheless, this hasn’t stopped countless students from abusing the two in tandem.

Some have suggested that users abuse Adderall because it instills a sense of confidence in them, an effect which triggers the brain’s reward system. This is an issue with many prescription medications.

What Makes Xanax So Addictive?

A physical and mental dependence to Xanax is all too common.

A team of researchers at the University of Geneva, Switzerland, lead by Dr. Christian Luscher have closely studied the mechanism of action of benzodiazepines. Their studies have found that the surge in dopamine in response to taking drugs like Xanax alters the synaptic plasticity in dopamine-producing cells.

As with Adderall, the long-lasting changes produced by Xanax during these dopamine surges dramatically alter the brain’s reward system, thus yielding a mental dependence on the pleasant sensations induced by Xanax use.

The movement of AMPA receptors from the interior to the surface of the dopamine-producing neurons causes the cell to be predisposed to stimulation by the excitatory neurotransmitter glutamate.

As a result, each subsequent intake of Xanax yields a larger surge in dopamine.

Over time, this obviously leads to a tolerance as more and more of the drug must be consumed to experience the desired effect. This is the same reason why Adderall users develop such a strong tolerance over the long term.

Why Are Adderall & Xanax Taken Together?

There is much evidence to suggest that taking Adderall and Xanax in conjunction with one another actually negates or reduces the desired effects of both, effectively canceling each other out. But that hasn’t stopped users from taking this dangerous combo.

All too many users believe that Xanax perfectly compliments the Adderall high by taking the edge off the stimulating effects of the latter.

One user on the Bluelight forums has called this Adderall and Xanax “soulmates.” In his post, he writes, “These two drugs were made for each other…For every 10 or so dex (50mg) I take .5-1mg of Xanax – very low dose but always there.”

Another user agreed, saying that the two combine into a very enjoyable high. Unfortunately, the “parachuting” these users are doing with the combo causes addiction to proliferate far faster than when each medication is taken separately and at moderate doses.

The abuse of the two together has become a real problem with 86% of people who seek help for their Xanax addiction reporting that Xanax is their secondary drug. What’s worse, the number of annual hospitalizations as a result of Xanax abuse reached 60,000 as of the year 2015.

Perhaps the simplest solution for the issue of addiction with any potent drug is responsible use.

For those who want to enjoy the benefits of these drugs over the long term, it is best to stick to a low dose of each.

Another method by which to avoid substance tolerance (read here how to avoid Adderall tolerance) or addiction is to cycle your doses, taking breaks from these drugs.

In other words, if you are going to take Adderall in a moderate dose for two days straight, discontinue use for the two days that follow before resuming Adderall use.

The same can be said of Xanax use; users should always stick to the recommended dose and avoid chronic use.

The thing that Big Pharma does not want us to know is that there is an awesome array of herbal or nootropic alternatives available on the market.

In fact, there are a handful of terrific Adderall alternatives that are every bit as stimulating to the body and mind.

The same goes for Xanax and similar anxiolytics. For those suffering from anxiety and depression, here are some of the top natural remedies for these conditions:

Each of these supplements has been found to be extremely helpful in the areas of depression, anxiety and panic disorders.

Kava is among just two who effects are backed up by significant medical evidence (the other one being St. John’s Wort). Kava, also known as kava-kava, is a South Pacific root which is usually brewed into a tea from fine kava powder.

Its calming effects and capacity for eliminating restlessness have made it ideal for those afflicted with sleep disorders, mood disorders and more.

The University of Maryland Medical Center has even written a comprehensive entry about kava, expounding on its clinically-proven advantages for those seeking cognitive enhancement and anxiety relief.

In addition to its all natural analgesic properties, St. John’s Wort has a reputation for alleviating symptoms of depression and anxiety.

It has been in use for more than 2,000 years as a folk remedy for any number of ailments including fatigue, sleeplessness and loss of appetite.

Some have suggested that St. John’s Wort acts not dissimilarly to SSRI (Selective Serotonin Reuptake Inhibitors), making it a viable alternative to mainstream antidepressants.

However, it is important to note that this has not been approved by the FDA (Food & Drug Administration) nor have most doctors advocated for its use as a primary treatment of depression or anxiety.

GABA (Gamma-Aminobutyic Acid) is a potent brain transmitter that counteracts glutamate. In so doing, it relieves excitability and, consequently, results in a reduction of stress.

GABA is said to play a vital role in behavior, cognition and the body’s response to stress, serving as an adaptogen of sorts. Those who are deficient in GABA include schizophrenics, manic depressives and those suffering from generalized anxiety.

GABA supplements are readily available at your neighborhood health store or online through botanical vendors.

Lavender oil is a potent form of aromatherapy that has long been used to combat anxiety and stressors. It has even been used to soothe the nerves of those going through opiate withdrawal.

Dr. Josh Axe, MD has included lavender oil on his list of the top 7 essential oils for anxiety for a good reason—because it works! Those who have used it for this purpose have reported feelings of cheerfulness, courage, optimism and a profound sense of calm.

A user on Reddit said, “I live by it! I use mine basically any time I’m home with a diffuser. It works wonders!”

Finally, Arctic Root or Rhodiola rosacea is another great Xanax alternative that can substantially reduce stress and anxiousness. Otherwise known as “Golden Root,” Rhodiola rRoseahas a long history as an organic anxiolytic.

According to the journal of the American Botanical Council, several studies have proposed that this natural root can aid in the prevention of stress, fatigue and generalized anxiety, not to mention the effects of oxygen deprivation.

These claims were further corroborated by a 2011 review of controlled human studies which showed signs that Rhodiola rosea could offer benefits in the areas of physical and mental performance as well as mental health conditions.

For those considering Adderall and Xanax abuse, it is quite clear that they make for a dangerous combination.

Both are severely addictive substances on their own and using large amounts of both at the same time further potentiates tolerance and addiction.

If you aren’t already hooked on these powerful controlled substances, it is best that you consider the natural options listed above.

If you or a loved one are already addicted to either or both of these powerful prescription medications, it is highly advisable to seek medical attention.