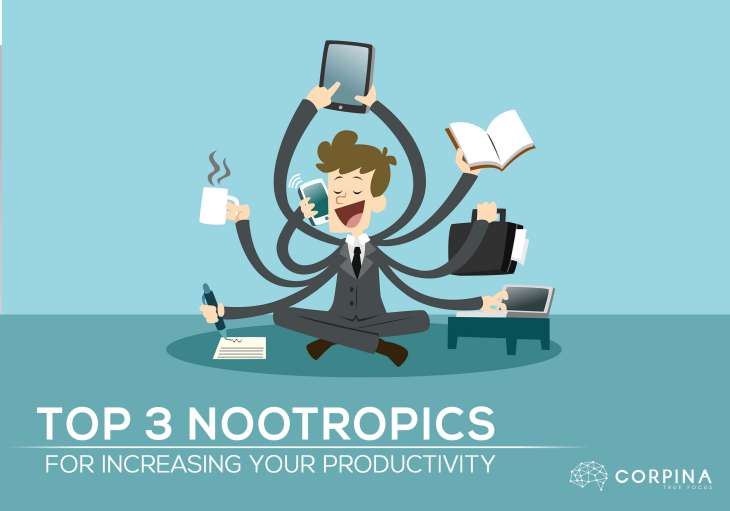 There are times when achieving peak productivity is more than just important – it’s absolutely crucial.

Like when you’re working on the most important presentation you’ve ever made in your life.

…Or when you find yourself facing an all-night emergency drive without enough sleep.

…Or when there are only a few hours left to prepare for an exam that you absolutely must ace.

In those situations when everything depends on maximizing your productivity, where do you turn for help?

Black coffee and willpower can only take you so far; too much coffee causes anxiety and willpower is a precious, finite resource.

When doing your best is the only option, you need a proven, reliable way to rev up your energy, lock in your focus, get your creative juices flowing, and make the most of your abilities… and that’s exactly what the right nootropics can do.

People in all walks of life count on nootropics to help them perform at maximum mental and physical productivity when there’s a lot on the line.

All nootropics enhance your brain power, but some truly shine when it comes to boosting productivity.

Quick aside – by productivity, I mean any increased output for a fixed set of inputs (also called increased “efficiency”). Inputs could be things like time, effort, or energy. So we’re looking at nootropics that might, say, increase the amount of outputs you could achieve in a fixed amount of time.

Here are three potent and popular smart drugs that can maximize your physical and mental energy; taken alone or in combination with other supplements, these outstanding nootropics can give you the edge whenever you need take your productivity to the next level.

Adrafinil is a synthetic nootropic compound that acts as a central nervous system stimulant. Originally developed to combat excessive daytime sleepiness, adrafinil was the active ingredient in the now-discontinued drug Olmifon, which was prescribed in Europe as a treatment for narcolepsy.

Adrafinil is similar to stimulant smart drugs like Adderall and modafinil, but unlike most other stimulants adrafinil does not carry the risk of dependency, interfere with normal sleep patterns, or affect heart rate or blood pressure.

Adrafinil is not regulated in the US or Canada and can be purchased without prescription; however it is banned by the World Anti-Doping Agency (WADA) as a nonspecific stimulant compound.

Adrafinil is a powerful nootropic as well as an effective physical stimulant. Its physical effects include promoting wakefulness , reducing fatigue, and dramatically increasing both energy and stamina.

As a nootropic it enhances productivity and motivation, improves learning capacity, memory, and speed of recall, and significantly boosts both attention and focus.

Many users say it also reduces stress and creates a feeling of general well being. This combination of physical and nootropic benefits make adrafinil an increasingly popular supplement among students studying for exams as well as shift workers, truck drivers, and others who need to maintain maximum physical stamina and peak mental capabilities for extended periods of time.

Adrafinil acts on the adrenergic system, the part of the nervous system that releases adrenaline.

It replicates the “fight or flight” response, a rapid release of adrenaline that increases energy and increases alertness, by boosting production of adrenergic neurotransmitters hypocretin, dopamine, histamine, and norepinephrine.

Similar to its analog – Modafinil – Adrafinil also enhances the production of glutamate, which improves memory and focus and creates better general cognitive function. It also stimulates the release of serotonin, which enhances mood by helping to lessen anxiety.

From AabsorbYourHealth (get 5% sitewide when you subscribe to my nootropics discount newsletter).

Noopept is a potent and popular supplement that acts as a cognitive enhancer, mood regulator, and a neuroprotectant.

Developed in Russia in 1996, Noopept is a synthetic nootropic peptide that is closely related to the racetam class of nootropics.

Its effects are similar to those of piracetam, the original synthetic nootropic, but Noopept is as much as 1000 times stronger than piracetam and thus requires a much smaller dose.

Noopept has been studied as a possible treatment for a variety of neurological conditions and is generally safe and well tolerated. It is not regulated as a drug in the US or Canada and can be purchased without a prescription.

Studies have also shown that Noopept can improve mood, regulate sleep, and increase daytime wakefulness. Noopept has also been shown to act as an anti-depressant, actually reversing states of learned helplessness in animal studies.

In addition, it’s an effective antioxidant that has been proven to act as a neuroprotectant, and clinical trials suggest that it could be an effective therapeutic agent for the treatment of chronic neurodegenerative disorders.

Noopept’s mechanisms of action are very similar to those of piracetam.

A fast acting water soluble compound, it is absorbed through the gastrointestinal system and crosses the blood brain barrier rapidly, generally reaching maximum concentrations in the brain within 15 minutes.

Its bioavailability rate is thought to be as much as 90%, significantly higher than that of piracetam.

In the brain Noopept, binds to glutamatergic AMPA receptor sites, preventing the breakdown of the neurotransmitter glutamate and preventing its reuptake.

This action results in increased circulation of glutamate in the brain, which improves brain plasticity and enhances cognition and memory.

Phenylpiracetam can be thought of “piracetam plus”; it is a piracetam analog that is a central nervous system stimulant and mood regulator as well as a powerful nootropic.

It was developed in 1983 in Russia, where it is regulated and prescribed both as a general stimulant and to increase tolerance to stress and extreme weather conditions.

It is not regulated in the west and can be purchased in the US and Canada without a prescription. However, it is a considered a performance enhancing drug and appears on the Word Anti-Doping Agency’s list of banned substances.

Phenylpiracetam has been studied as a potential treatment for encephalopathic conditions, brain lesions, and traumatic brain injury. It is considered to be generally safe and well tolerated, with little potential for abuse.

Phenylpiracetam is both a nootropic that enhances cognitive abilities and a psychostimulant that improves physical energy, stamina, and performance.

Its effects are similar to those of piracetam, from which it was developed, but phenylpiracetam is as much as 60 times stronger.

Though it is a central nervous stimulant that significantly increases locomotor energy, it does so without the jittery negative side effects associated with caffeine, amphetamines, and other stimulants.

It’s important to note that phenylpiracetam is powerful in small doses, so taking too much or “megadosing” can cause jittery site effects.

I’ve never experienced these myself, but know many friends who have. Start small with this powerful nootropic and let the drug do its thing.

Phenylpiracetam is a fast acting water soluble compound that is believed to be 100% bioavailable. It crosses the blood brain barrier rapidly, reaching peak concentrations within an hour, and it works by modulating the release of a number of crucial neurotransmitters including acetylcholine, GABA, NMDA, and dopamine. Because of this, phenylpiracetam isn’t just a productivity booster, but it can also prevent or slow age-related cognitive decline.

Its stimulatory effects are theorized to be at least in part due to the its molecular structure resembling phenylethylamine, which is a natural compound with stimulatory effects. Tolerance to phenylpiracetam can become an issue, with some users reporting noticeably diminished effects in as little as 2 – 3 consecutive days of use.

While this is not the norm, it is a known effect and can be addressed by limiting phenylpiracetam use to specific situations when a significant boost in physical or mental energy is needed.

Working Hard Is Good, But Working Smart Is Better

Adrafinil, Noopept, and Phenylpiracetam are all well known and time-tested supplements that have earned excellent reputations as brain and body boosters.

They are affordable, readily available, and taken as recommended they’re safe and well-tolerated with no serious reported side effects.

When achieving maximum productivity really counts, these are nootropics you can count on. They can make that all-important difference between working hard and working smart.